Taking a Look in the Bears History Book: Cade McNown

Share All sharing options for: Taking a Look in the Bears History Book: Cade McNown

While talking on his cell phone, our next Bear was driving toward Platteville, Wisconsin when he found himself in an awkward predicament. No, he didn't crash his Lamborghini into a telephone pole (he was actually driving an SUV). He had no cash at a toll-booth, barely hours after signing a 5-year contract worth potentially $22 million.

"I have no cash," he shouted to a toll-booth operator. "I have credit." "Maybe you should tell him who you are," McNown's cell-phone caller suggested as the quarterback asked for an envelope to mail in the 75 cents he owed. "He's too busy yelling at me," the rookie replied. "You'll probably laugh at this someday," the caller said. "I'm already laughing now," said the NFL's newest multimillionaire. "I'm getting honked at by angry truckers."

Little did Cade McNown know that he would still be honked at by angry truckers in the years during and following his season with the Bears... although for very different reasons.... mostly because of his horrible "contributions" to our team. If the Superfans were driving a truck, they'd probably have run him over.

But thanks to a request from our very own David Taylor, this week's Taking a Look in the Bears History Book is about the one and only CADE MCNOWN! Join me after the jump to learn a little more about this infamous Bear...

Cade B. McNown was born January 12th, 1977 in Portland, Oregon. He attended San Benito High School in Hollister, California until his senior year, when he transferred to West Linn High School in West Linn, Oregon. At the latter, he played quarterback and free safety. He was also a talented track star, where he set the school record in pole vault. He was widely touted as a college prospect in football while he led the school to 1994 Oregon 4A semifinals.

McNown was signed by UCLA (University of California - Los Angeles) for college where he was a starter for the Bruins as a true freshman. Four games into the season, he was ranked number 1 among all freshman in most of the statistics. What helped him decide on UCLA? Future NFL quarterback Brock Huard signing with Washington. Huard and McNown were the top high school quarterback prospects in 1994. 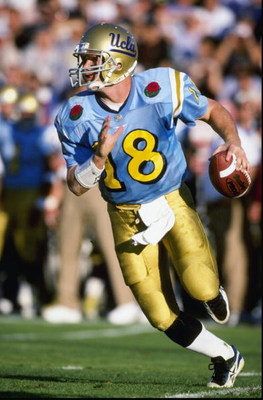 As a sophomore, he was a little less efficient, ranking 9th in pass efficiency in the PAC-10. In 1997, as a junior, he was named the Most Outstanding Offensive Player in that year's Cotton Bowl Classic (where UCLA won over Texas A&M after a 10-2 season). He was also a finalist for the Davey O'Brien Award, which awards the best of all National Collegiate Athletic Association (NCAA) quarterbacks. He was named a third team All-American by the Associated Press and The Sporting News, and was second team All-PAC team (behind Ryan Leaf). He finished 8th in the balloting for the Heisman. Not bad, especially considering how he broke many UCLA school records and was 1st in the nation in passing efficiency with a rating of 168.6.

His senior year (yes, all of the above was only his junior year) he set more records in passing and offense and became the PAC-10's all-time career leader in offense. He was also the PAC-10 co-offensive player of the year, won the Pop Warner Memorial trophy for the best senior player on the west coast, was first team All-American from the Associated Press, was awarded the 1998 Johnny Unitas Award for the top college quarterback in football, and finished third in the voting for the Heisman Trophy. He also earned the MVP award in the Senior Bowl.

In September of 1999, McNown was charged with the illegal possession of a handicap parking pass while playing football at UCLA three years earlier, in 1996. He pled no contest. Others charged included: Skip Hicks, Larry Atkins, and Brendon Ayanbadejo. Also, the FBI investigated McNown and other UCLA members who were suspected of having ties to a suspected mobster. However, he passed a polygraph and after investigation, was completely exonerated. 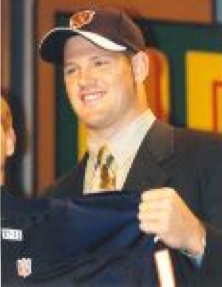 He was drafted by the Chicago Bears in 1999 with the 12th overall pick in the 1st round. The only quarterback to be drafted higher by the Bears? Jim McMahon. McNown was named the season's starter, but was a contract holdout for most of training camp. Head coach Dick Jauron then announced that Shane Matthews would be the starter, but that McNown would play at least one series every game to gain experience. He started his first game on October 10th (following a hamstring injury from Matthews). After a poor start to a game against the Rams in December, he decided to sit out the second half. Jim Miller replaced him, and then was suspended later in the year, giving the rookie the opportunity to shine again. He ended his season by breaking franchise rookie records for passing attempts and completions.

The next season, he was named the starter over both Matthews and Miller, but as time went by, his performance worsened. He then injured his shoulder during a Philadelphia game when linebacker Mike Caldwell tackled him onto the almost asphalt-like (according to players) fake turf. He was replaced by Miller, who then injured his shoulder in another game, and was replaced by Matthews. (Confusing, right?) McNown played one more game that season, and was benched for the final game of the season.

McNown was traded to the Miami Dophins in 2001. It's been said that the major reason for trading McNown was his attitude. Players have said that he was known to brag about his $6.1 million signing bonus around veterans who were making the NFL's minimum. Jerry Angelo told the Chicago Tribune once that highly paid young players need to be taught how to behave around lesser-paid veterans. *hint**hint* Also, many remember his harsh comments about teammates after poorly played games, like when he suggested that he overthrew his receivers because they were too tired to run after his passes or when he told Bears fans to not bother coming to the games if they were going to boo him. When you get a combination of bad attitude, the blame game, and poor performance, it's time to go.

McNown was a third-string quarterback and never saw playing time with the Dolphins. The Dolphins then traded McNown to the San Francisco 49ers in 2002. The 49ers were hopeful - they were looking for a west coast offensive quarterback. However, McNown reinjured his shoulder during preseason, and was placed on injured reserve after finding out he needed season-ending surgery. This ended his NFL career, he was released by the 49ers in 2003. 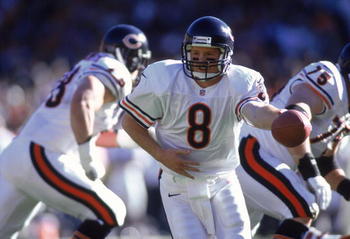 He finished his career with a QB rating of 67.7 He then worked out with the Calgary Stampeders, but was never signed.

McNown is currently 34 years old. He still holds many of the UCLA passing and offensive records, as well as the privellege of being the only UCLA quarterback to go 4-0 against the Bruins' rivals, USC. In October of 2009, McNown was inducted into the UCLA Athletics Hall of Fame.

He is also well known for frequently visiting the Playboy Mansion, and ultimately stealing Hugh Hefner's girlfriend, Brande Roderick, Miss April 1999. This pushed Hef over the edge, causing him to ban McNown from the Mansion for life. While that relationship didn't last long, Tim Couch (Cleveland's then QB) made the mistake of introducing his girlfriend, Heather Kozar (the current Playmate of the Year at that time) to McNown. He sent her flowers, even his Porsche, and eventually she moved in with him. She ended up marrying Couch in the long run, but still, how shady of Cade! However, he insists that he doesn't read Playboys and has never seen her layout. (Who believes this!?)

Dying to know more? Check out a post by Dane written earlier this year: Worst Bears Draft Picks of All-Time

So WCG'ers, how do you feel about Cade? I know most people despise him, but do you think he was really that terrible or just injury-prone?

Any other players you'd like to see on Taking a Look in the Bears History Book?