Share All sharing options for: The 10 Most Important Bears for 2011 - #8 Earl Bennett 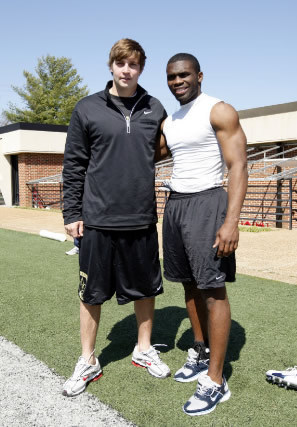 Trying to weigh one players worth over another is a difficult exercise.  When the topic is as subjective is this one is, it's more of a jumping off point for good discussion with our readers than it is a set in stone ranking.  But, I give it the old college try.

Up at #8 is the best wide receiver on the roster, Earl Bennett.  All the talk about him being a good fit to play in the slot does a disservice to his skills.  Bennett is a starting quality in receiver in the NFL, and he very well could be the #1 the Bears are lacking.  I would be surprised if he isn't a starter come week 1.

Mike Martz's recent comments about getting Bennett more involved in the offense and his being able to play outside tells me they realize how important he is to the offense.  I still expect him to line up in the slot on occasion, but he should be a starting receiver for the Bears.  He runs good crisp routes, he has great hands, he has deceptive speed, he'll fight for the ball, he'll block his ass off in the run game, and he'll fight for yards after the catch.  Sounds like the description of a number one receiver to me.

Even if a wide out is acquired via free agency, I think Bennett will step up to be that guy for the Bears, and be that guy for Jay Cutler.  He started 15 games in 2009 and caught 54 for 717 yards, and I do expect him to get starters reps in 2011 so a thousand yards with about 80 catches is in his sights.

You say you want a #1 with a little more swagger, a little more bravado?  Bennett is a confident player, but he's not really diva-like, but if you remember he did switch his jersey number in 2009.  From the Bears official site:

"It wasn't anything specific," Bennett said. "I just wanted to change my number. I feel like ‘80' fits me a little bit better. I think it's in my character. I didn't really think ‘85' really fit it.

"Number 80 has so much tradition behind it with Jerry Rice and Cris Carter and those guys, and hopefully I can become one of those guys and be a legend like they were."

You hear that Bears fans?  Legen...

* Special thanks to David B. Bass of Vanderbilt University for the photo above.  It was taken at Bennett's Pro Day, and it was a week before Cutler was diagnosed with Diabetes.