Share All sharing options for: Taking a Look in the Bears History Book: Keith Van Horne

Gazing upon Keith Van Horne's mammoth physique could be intimidating. He was a big guy playing a football position where they are all big guys. He just didn't seem to be a guy you wanted flexing his muscles in your face... A generation later, offensive tackles like Van Horne commonly weigh 50 pounds more. They look more like sumo blockers than sculpted athletes, and although they are strong and fast, the tackles of Van Horne's era seemed more fearsome because they looked like football players.

As you could have guessed, this week we'll be looking at another member of the '85 Bears. This Bear was not only busy on the field, but off it was well - even when retired. In fact, most of this post is about his life after football! Take a look with me after the jump to learn more about this beloved Bear!

Keith Van Horne was born November 6th, 1957 in Mt. Lebanon, Pennsylvania. He attended Fullerton High School, in Fullerton, California, and then went to college at the University of Southern California. He played football at USC and was an All-America tackle. He was also runner-up for the Outland Trophy, as college football's most outstanding lineman.

After his 13 years as a Bear in the NFL, Van Horne and friend, Kevin Mullins, tried their hand at producing movies.

"I've been kind of having a good time trying to develop film projects," Van Horne said. "We have some good ideas and hopefully have landed a documentary with Showtime filming it. It's still in the early stages to say the least." 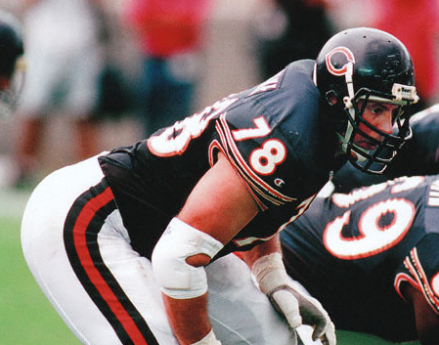 In 2000, Van Horne won a $1.6 million lawsuit over Mancow Muller, the host of "Mancow's Morning Madhouse" at the time. Van Horne was a disc jokey on WLUP-FM and was leaving from finishing up his overnight talk show in 1994. The two men passed each other in the hallway (the two different stations both owned the same studios in the same building). Apparently there was an argument and afterward, Muller went on air and accused Keith of "stalking, chasing, and threatening to kill him" in their conversation.

Calling Van Horne "psychotic," "nuts," "extremely violent," "over the edge" and "a Charles Manson who works out," Muller said: "He is trained in killing people. This man should be put behind bars. He is dangerous. . . . If they find my body in a sewer in the next 24 hours, somebody say it could be Van Horne."

Van Horne then filed a multi-million dollar defamation suit against Muller and Evergreen Media, the station. Keith's lawyers accused the station of being negligent for hiring Muller, despite his reputation of acting outrageous on air. This part was later rejected.

While neither Muller nor his current employer have to pay a dime (his former employer must foot the bill) Muller's troubles are far from over. Not only are stations hesitant about hiring him, but at the time of the settlement, he was facing a $100 million lawsuit filed by Janet Dahl (Steve Dahl, a rival radio personality, is her husband). The suit claims that on his Q-101 morning show, Muller "repeatedly and falsely referred to [her] as engaging in adultery, fornication and sexual promiscuity in the vilest of terms."

Back to Van Horne and Muller, here are their own takes on the lawsuit:

"I feel vindicated as a result of the settlement," Van Horne said. "I hope that station management will now exercise better judgment in managing Muller's on-air conduct. Muller calls his show `The Free Speech Radio Network,' but, although I believe in free speech, it is not a license to lie."

Muller, who now hosts mornings on WKQX-FM (101.1), said: "I have defended my right to free speech for over half a decade in this case--and I will not abandon that most precious constitutional right." 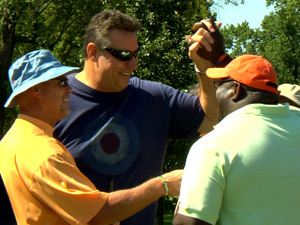 Keith married Eleanor Jane Mondale in April 1988. She was a disc jockey at WCGK-FM in Chicago and wrote a couple of books. Her father, Walter, was the former Vice President and Democratic Senator from Minnesota. When asked how he proposed to his future wife? "I just asked her if she wanted to hang out with me for the rest of our lives."

Pete, his brother, was a first-baseman-outfielder was a Chicago Cubs draft pick. Keith is currently 53 years old and lives in the Chicago suburbs.

*Note: This video is 45 minutes long... tune in at 2:30 and Van Horne talks about his football memories and then proceeds to build a trophy with the guys... feel free to watch as long as you like - he's very personable!

We'll end with a quote from Van Horne, talking about how this long after the Super Bowl there were still endorsement opportunities and they were wanted at dinners to speak publicly, etc. :

"They love the Bears," Van Horne said of the fans. "I mean, a Bears fan is a Bears fan. But they have a special place in their hears for us, and we certainly appreciate that. It's quite a blessing to be able to have those opportunities still 20 years down the road. It's really neat."

Want to know some of Van Horne's opinions about the offensive line after visiting training camp last year? Look here!

Any other players you'd like to see on Taking a Look in the Bears History Book?