Well Chicago Bears Fans What Should My Next Post Be?

I dunno, how about a Best of the In Game Thread?!! That's right, this Saturday the Bears play their first preseason game and, as always, that means an In Game Thread. What's this, the rookies might be asking? An in game thread? What does that mean and why should I care? Well join me after the jump for a thorough explanation and a to toast our regulars and newbies alike.

First of all let me extend a warm welcome to anyone who wants to join the in game thread with me this Saturday. The in game thread is your opportunity to join your fellow Bear fans during the game and "talk" about everything under the sun (including the game as it is happening). But why would I want to take time away from the game to blog, you might ask. Well, for one thing, you can vent, gripe, cheer, rejoice and generally commiserate with some of the best Bears fans in the world. It's sorta like being in an all Bears sports bar while watching the game except you don't have to care about what you look like cause we can't see. For another thing it can provide updates concerning the game for those who don't get the broadcast. It's not quite as good as play-by-play but it will give you a general feel for the game. And finally, if you join the in game thread this season you'll have a chance to win some toast.

See after the thread is long done and gone I go back and read through the threads. I find comments that are witty, intelligent, amusing or even bizarre (occasionally all 4) and I copy and paste them into my own post. It's called (wait for it) The Best of the in Game Thread. And at the end of the post I choose several posts for my Academy Awards section. These are the posts that were the best of the best, so to speak. Well this year I'd like to award my readers with a prize for the best comment of the year. I would like to give them toast. But not just any toast. This toast would be the kind of toast you can only get with your very own Chicago Bears toaster. It toasts the Bears logo right onto the bread. See, through a minor family snafu I have two of them. One is still in the box and I'd like to ship it out to one of you good people at the end of the year. I'll choose my ten favorite posts of the year from 10 different posters. Then I'll open up the voting to you good folks at WCG. The post with the most votes gets the toast (Damn fine alliteration if I do say so myself) or they at least get the toaster courtesy of me. 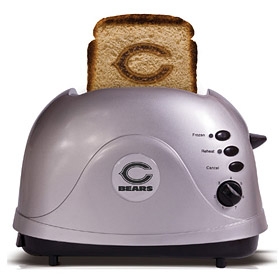 So join me this Saturday for the thread, post a few comments where and when you see fit and who knows? Maybe you'll win the toaster. But you won't win it this Saturday because preseason posts don't count. (But post season posts do) Consider the preseason a warm up for the posters. (Hey, just like the players do so we'd better see lots of rookie contributors there.) It will give you some idea what kind of game you need to bring to make it into the Best of. See you guys on Saturday....