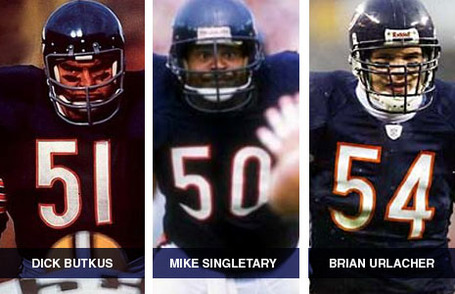 Jump with me to see a few of each candidate's credentials.

Before I get started, any respectable list that claims to display the top middle linebackers in Chicago Bears' history should always include Bill George. George is considered the creator of the middle linebacking position (and the 4-3 defense), arguably being the first player to stand up from his middle guard position and drop back in coverage. This helped the eight-time All-NFL linebacker record 18 career interceptions, and 19 fumble recoveries. George was an 8x Pro Bowler, 8x All Pro, and was inducted in the 1974 class of the Pro Football Hall of Fame. For what it's worth, I was hard pressed not to include him in this STR. However, I had to choose three, and I thought the selections below would lead to the best debate. On to the games...

*You must sign one, trade one and release one.

Please note that tackles, sacks, forced fumbles and other defensive statistics were not recorded during Butkus' and Singletary's playing days, and some of the information in the charts above is considered "unofficial". Also, the information above is pulled from multiple reference points including nfl.com, pro-football reference and many others. Some of these sites have conflicting numbers, and I tried to be as "official" as possible.

Use the comments section to tells us your selections, and the reasonings behind them.