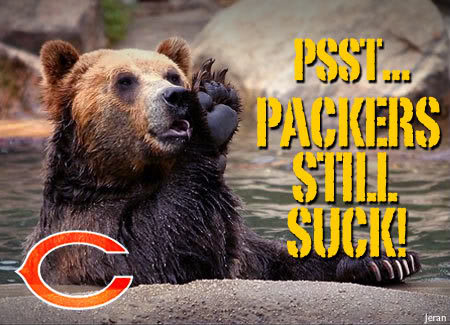 Feels good to write one of these again. While it's too early to say this game could decide the season for the Bears, it's not too early to say that this is a big game. The Bears come in having looked really good against the Falcons and pretty good for a half against the Saints, and thus sit at 1-1. The Packers, meanwhile, got out in front of the Saints and had to withstand a final goal-line attack, and the Panthers... well, the Packers are 2-0 and sit atop the NFC North tied with Detroit. A win pushes the Bears and Packers into a tie for at least second, pending if Minnesota can take out Detroit. A loss makes it a two-game deficit, but psh, like that hasn't been made up for during the season in NFL history, right?

Linkage after the jump.

The AP game preview is here. First line ONNTSA. You've been warned. For a preview devoid of "Da masses criticized his toughness for weeks!", The Sun-Times breakdown and official preview at your service.

If you like hearing Fox execs get drilled for "using the wrong word," don't feel bad, so do I. If we're talking about an apology for each wrong word used, why isn't he still talking now? And take a listen, see if the national apology happens today. My guess. No.

There's a good likelihood Cutler will still be a hot topic. And Joe Buck himself says "There's no Jay Cutler bias whatsoever." I'll let you guys have fun with this.

I'm not sure if "Antidote" is the proper word here, Potash, but yes, the defense does handle the Packers offense better than most.

Pompei thinks the Saints game was a welcome slap in the face to Martz to use the running game.

UDFAs a credit to scouting? In a sense, I suppose. I like to see higher draft picks scouted well, too.

If you needed something to fuel your rivalristic hatred of all things cheese for a day, enjoy da Coach.

And... Further adventures in replay.

Gameday procedures for today, the early game thread will pop at 1:00 ET/12:00 CT. First quarter thread will pop at about 4:00 ET/3:00 CT and each quarter will come up as the game progresses. Recap will be up within 15 minutes of game end and you'll get a Sunday Night Football thread before that game kicks off.

And with the propers out of the way... BEAR DOWN!