Excerpt: "Walter Payton: The Hero No One Knew"

Share All sharing options for: Excerpt: "Walter Payton: The Hero No One Knew" 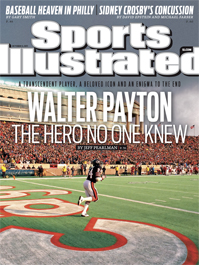 We couldn't tell you how often press releases and promotional items come through our inbox on any given day, and for the most part, they are not even worth reading.  Today, however, was a different story.

We received a heads up on an article coming out in this week's Sports Illustrated-  An excerpt from an October 5th release of Jeff Pearlman's book Sweetness: The Enigmatic Life of Walter Payton.

Pearlman interviewed over 700 people during his research, and wrote a book that will undoubtedly punch many NFL fans in the gut regarding the life of one of the most respected athletes of all time.

Look for the new edition of SI on stands now, and the book to hit stores next week.

Below you will find some of the excerpts.

One of the moments Pearlman revisits is the weekend of Payton’s 1993 induction into the Hall of Fame. Pearlman says that unbeknownst to the public, Payton had been living apart from his wife, Connie, more or less since his retirement in 1988, though they remained married for fear of how a divorce would affect their children, Jarrett and Brittney, and Walter’s well-cultivated public image. Connie made the trip to Canton that weekend in 1993 with the kids, and according to Pearlman so did a woman, Lita Gonzalez (not her real name), with whom Walter had been in a five-year relationship, one that would continue until the year he died. Pearlman writes that Payton was anxious throughout the weekend, mostly staying in his hotel room with his girlfriend while his family was in a separate suite. Payton’s then executive assistant, Ginny Quirk, tells Pearlman that she was given the task of keeping the women apart:

Payton’s longtime agent, Bud Holmes, tells Pearlman that he received a call from Connie after the ceremony, asking him to introduce her to Lita, who sat a row behind Connie during the event. Holmes says:

Pearlman says that by the mid-90’s Payton was depressed and even suicidal. In a letter to a friend, Payton said he imagined himself murdering those around him and then turning the gun on himself. In their interviews with Pearlman, both Holmes and Quirk recall receiving calls at all hours of the day from Payton, threatening to end his life. As they tell Pearlman: