Share All sharing options for: WCG Exclusive: Brian Urlacher says "I've been a spectator this year"

You just knew that when Nike stormed its way into the NFL that new jerseys would just be the start. Yesterday, they rolled out the red carpet for fans, media, and Bears players in the coldest football city in America - Chicago - to unveil their new line of winter-weather gear, Hyperwarm. 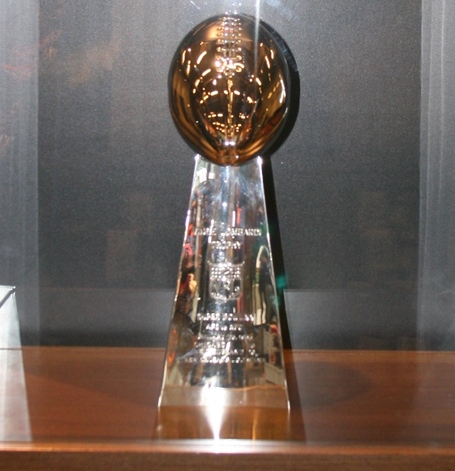 The Super Bowl XX trophy, which will not keep you warm, was also on hand.

The event started off with a presentation by Charles Tillman on the new gear. As a native Southerner, he talked about how tough it was for him to get adjusted to playing in "Bears weather." He said that while last week's game in roasting hot Jacksonville took some adjusting to, that the cold "makes you not want to play. You have to be mentally prepared for the cold." He talked about 2004 game against the Houston Texans where it was so cold "it hurt to breathe... my nose hairs froze." Since Reebok never offered good base layer clothing, Tillman has been secretly wearing "a couple of" Nike undershirts since. Echoing what Devin Hester said to WCG when Nike first entered the NFL scene, Tillman said that, overall, "the technology is a big hit with us." 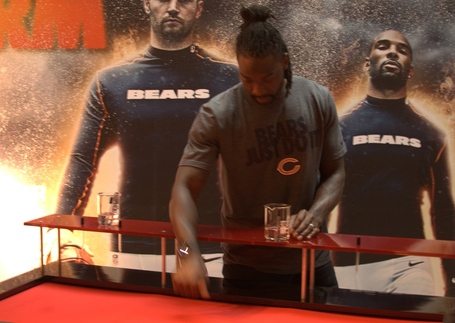 Such a realistic poster! Charles Tillman puts the "you can't get this wet" claim to the test.

Tillman also uses a pair of customized Nike gloves no matter what the weather, as he needs extra padding around the knuckles. Not to keep his hands any warmer, however: as he put it, "I punch. [Normal gloves] might bruise my knuckles." He also has a "custom" solution to keep his feet warm in the winter - he doubles up on his socks, and stuffs hand-warmers into his shoes to keep his toes warm. He also has another secret piece of gear in his arsenal - contact lenses. While he has perfect vision without them, he wears amber-tinted lenses for outdoor games and yellow-tinted lenses for dome games, which give him the advantages of a tinted visor without its troubles.

Veering away from the topic of gear, Tillman talked about his various cross-training routines that he does outside of Halas Hall. He's an avid swimmer, does pilates and pliometrics, and sometimes breaks out the strobe goggles to work on improving his hand-eye coordination. While he "almost broke his nose a couple of times" using the goggles, considering both him and Tim Jennings have been training with them recently, I would say the risk has been worth the payoff.

After all the talk about the new gear, it was time to try it out. The Nike folks decked us media folks head to toe in the new gear and took us out to a football field for a training session. I proved to have the hands of Roy Williams in the passing drill and the feet of J'Marcus Webb in the footwork drills, but the gear held up well: I stayed plenty warm despite a heavy breeze off of the Lake and plenty of sweat on my body. And while I didn't get a chance to test this feature out until it started raining later in the evening, the base layer's water resistance is quite good - I was able to take a walk around the block and stay completely dry. After my performance in practice, I don't see myself ever getting the chance to try out the gear in a game, but I'll at least be able to stay warm the next time I tailgate in sub-zero temperatures. 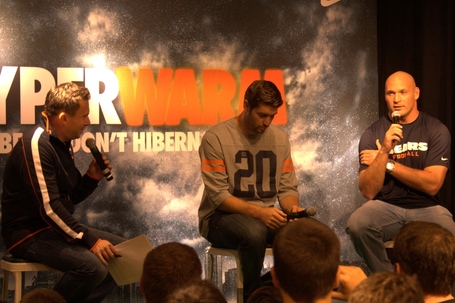 Waddle wasn't available, so they had to send Silvy to run the Q and A with Cutler and Urlacher

By the time we got back to NikeTown, the event was in full swing, with members of the Bears Drumline on hand to entertain the fans waiting to see Jay Cutler and Brian Urlacher, who were also on hand for the event. The two had a brief Q-and-A session with the public before heading to their next round of Q-and-A with the media. You can tell Cutler was pumped for it. 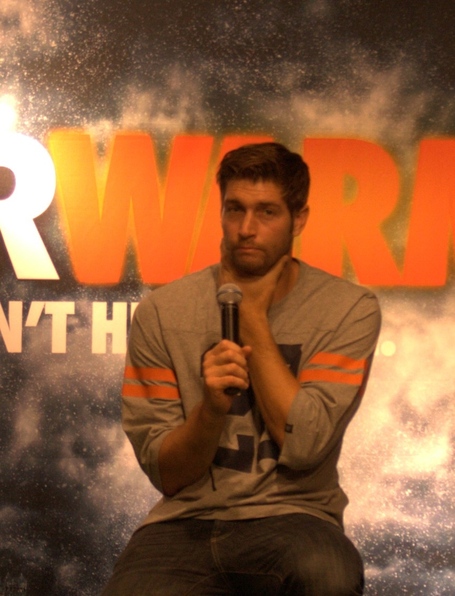 While Jay managed to elude me, I did get a chance to chat with Brian Urlacher about the season so far.

Urlacher was quick to acknowledge that he has still hasn't gotten up to full game speed yet, saying of his season so far, "I haven't done anything. I've been a spectator this year. I make a few tackles here and there, and make the calls." He has been enjoying the view from the field, though. He said of Tim Jennings' breakout season that "he had a great spring, a great training camp. He's always had great hands in practice, but it's good to see him finally get some in games." He also said that Jennings hasn't gotten enough credit for his tackling skills, a key requirement for any Tampa 2 CB. On the back end of the secondary, Urlacher has been very pleased with the play out of the Bears' two young safeties, Chris Conte and Major Wright, pointing out that Wright has "twenty tackles, three picks, always in the right spot. He's probably been the most consistent guy on our defense. Everyone said [our safety play] was a big question mark going into the season, but he's done a great job for us."

Urlacher is also loving the rotation of players in front of him, as it has made his life a lot easier. Not one to mince words, Urlacher pointed out that in Rod Marinelli's 'everyone runs to the ball' defense, "when the ball is thrown, [the defensive line] have to turn their asses around. It's tough to do when you're that big, but they all do it and make plays." The upshot for Brian is that "it's fun to watch" - when everyone rallies to the ball, he has less work for himself.

Brian said that the number one goal for the bye week is for everyone to get healthy and "get their legs under them." After that, the practice plan is simple: "Take the football away, run to the football, and then whatever happens, happens. We do a pretty good job when we play hard and get takeaways."

Despite his aging defense, Urlacher isn't worried about teams getting an advantage on the Bears by using a no-huddle offense - "We're a bunch of veteran guys. We know the calls. It's not a big deal for us. We practice it every day." The other situation an offense could take advantage of the Bears age - the two-minute drill - doesn't worry Urlacher either: "We're either running Cover 2 or a blitz, so it's not hard for us." While Urlacher may never be the physical force he was before, having a player with his knowledge of the system is invaluable. Let's hope the time off helps him get back a bit of what he's lost. Worst case scenario, he'll at least be a little bit warmer while he watches the rest of his team play lights-out defense.