WCG reporter Steve Ronkowski had a chance to catch up with Forte, Davis, and Bennett while they lent a helping hand to Chicago's worst high school football team.

No NFL team has ever had to suffer through what Chicago's Tilden High School has over the last four years. Their football team has gone an incredible four years without a single win to their name, but their fifteen players have continued playing the game despite the tremendous adversity. Event sponsor Duracell partnered with three members of the Chicago Bears' offense to try and give these dedicated players "power-up" both on and off the field. 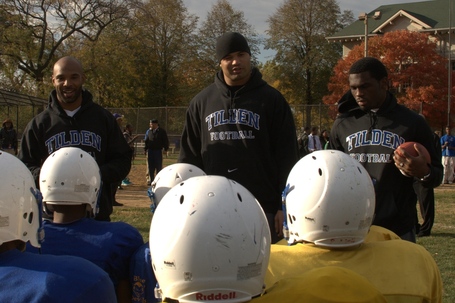 Forte, Davis, and Bennett rally the troops before practice

Joined by teammates Kellen Davis and Earl Bennett, Matt Forte surprised the Tilden students yesterday morning at an impromptu assembly to help build support for the beleaguered football team. More than that, he brought a message to the whole student body of encouragement and support, asking each student to trust the power within them to achieve their goals. He and Duracell also surprised the students and staff by donating much-needed supplies - TI calculators, a ZOLL automatic defibrillator, and an impressive collection of football training equipment - to help the team and the student body make their dreams a reality. 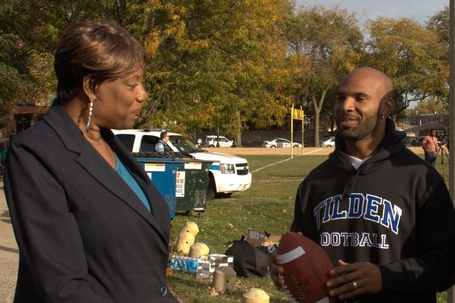 These generous donations were a welcome gift, but the Bears that were on hand also donated one of their most precious assets: their time. The trio stuck around campus for the day, and then hit the practice field with the school's football team to serve as assistant coaches for the afternoon. They broke down the huddles, led the player groups in blocking, route running, and ball handling drills, and rallied a strong group of Tilden students to cheer on the practice. Like Tilden's team, the three Bears at the event told WCG they were striving for the same two things as Tilden's team, consistency and success. And while Tilden's goal is simply to break their losing streak with fundamentally strong play, the three Bears there were clear about what consistency on offense can get them: a Super Bowl. 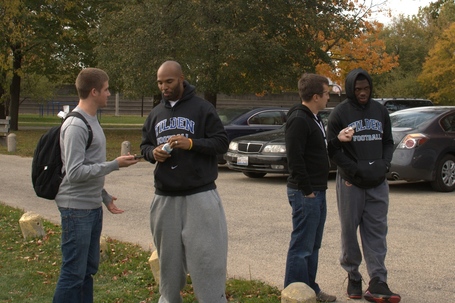 Matt Forte and Earl Bennett Meet with Members of the Media

Matt Forte's message for Tilden? "It doesn't matter, really, about wins and losses. Winning is good, but outside of football, they can be successful in whatever they want to do." In the world of football, success is measured by dollars as much as wins, and while he still seems a bit annoyed that the team didn't "take care of the guy that's on the team and has been working hard" first, he's been "getting along well" with Michael Bush.

Forte sees progress on the offensive line, saying "It's always happened that way. The past couple years, it's started out a little slow in the run game, and it's progressively gotten better. This year, we struggled a little bit, but... the offensive line is getting better week to week." As far as what the team should work on moving forwards, "The key is to get better at the run game. If they want to double the receivers and shut that down, we need to be able to run the ball." His personal goal is simple: 1000 yards rushing. His goal for the team is just as straightforward. "As a team, everyone wants to make it to that Super Bowl. This team has been there before, and we want to get back there and take care of business this time." 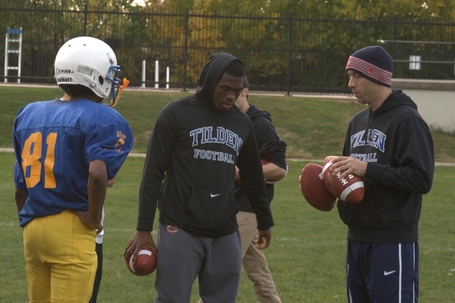 Earl Bennett is "fully recovered and ready to go" moving forwards. As far as how he fits into the new, more crowded wide receiver picture, he feels his role "is pretty much the same. Before I went down, we were clicking, they were spreading the ball around. We were winning, and as long as you keep winning, you don't change your recipe."

Bennett's greatest role on offense has always been his ability to come through on third down, the secret of which "comes down to being quarterback friendly, being in your position, and... being on the same page [as Jay Cutler]."

While the run game is almost the same, for the receiver group it's been a "totally different offense. It's very wide receiver friendly. It gives us a chance to add a little flavoring to our routes, and it gives us a chance to give [Tice] some input. Mike Tice has been doing a really good job of spreading the ball around... We have to continue to focus on what we do well as an offense and build on that."

The turnaround at halftime last week? "Really big," Bennett said with a laugh. "We needed to get out there [after halftime] and prove what type of team we were." He was happy to help out at the event, regretting that he couldn't go back to his now-torn-down high school in Birmingham to help out there as well but saying it's "always good to give back to the community." Bennett's got his sights set on the prize as well: "I've got one goal: win a Super Bowl. That's it. We have the weapons to do it, we just have to go out every Sunday and prove it." 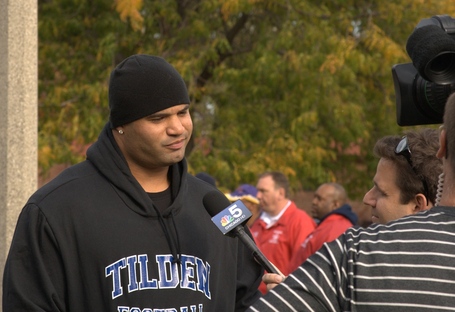 Tight end Kellen Davis hasn't felt his role as a blocker has changed much this season, saying it's not a "huge jump" from Martz' system as coached by Mike Tice, to Tice's own system, but he does like the biggest change: giving Jay Cutler the chance to audible. As Davis explained, "The biggest difference is that we are trying to get an advantage with the number count in the run game" and that Cutler can always audible to a run when there are only seven defenders in the box.

Overall, Davis said that "we're starting to get to where we want to get in the run game. We got Matt to 100 [yards] in the last game, but we should get Matt to 100 in every game." And while the offense's focus during the bye week is on "everything," Davis trusts the offensive coaches to "reflect on our tendencies, see what we're good at, and what we need to be better at. Hopefully they can come back next week with some stuff that can help us take that next step."

Kellen Davis can't quite relate to the Tilden's struggles, having lost "maybe four" games his whole high school career, but did play the ironman: he lined up at wideout, running back, tight end, outside linebacker, and defensive end in high school. As for his and the team's goals, he first mentioned the need for "consistency" before saying that the "first goal is make the playoffs, and I think we can make a good run at it this year... I'm looking forward to seeing what we can do in the post-season." 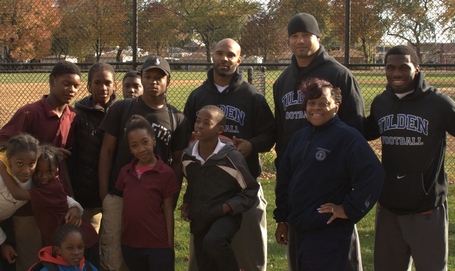 I love the tone coming from the three players, as they clearly understand what the team can be if the offense really comes together this season. With the defense playing their best since 2006, if the offense can bring an equal level of intensity and consistency, this team can go far. Instead of the wild predictions in the preseason, however, we have a more qualified optimism: they know they have to get better overall, but also know just how good their skill players can make this offense be.

It is this same message of success through hard work that the three brought to Tilden, and if the Bears on-field performance is any guide, it's a message that can help transform Tilden's football team as well as their own.

Many thanks to Duracell for sponsoring this "Trust Your Power" event, and for their and the Bears generous donations of supplies and their time to Tilden HS.