We're more than just Chicago Bears fans around here. It's football 24/7 for some of us, so enjoy our look around the NFL.

Share All sharing options for: NFL Thoughts Week 6: Chicago Bears and Beyond

Remember when the AFC was thought to be a top to bottom superior conference to the NFC? It doesn't seem that long ago, but things sure have changed in 2012. Do you realize that if the Denver Broncos can defeat the San Diego Chargers tonight, there will only be two teams in the entire AFC with winning records.

Things haven't gone as planned for some teams around the NFL, and a few others are starting to get back to normalcy.

Before I get into my Thoughts, did you know that Windy City Gridiron Weekend Warrior Steven Schweickert did a Thoughts post two better, by adding some Musings and Ramblings to his NFL Thoughts in his weekend column. Check It Out!

1) With the 49ers, Texans, and Patriots all losing, I wonder if the Chicago Bears will be solidly be in the top 5 of various NFL Power Rankings? Grantland already has their top teams listed out for this week, and sitting on top of their list is the 4-1 first place Chicago Bears.

2) Guess which team has the best point differential so far at +78... Yes, the Chicago Bears. As Grantland pointed out in the link above, the Bears 4 victories were all in dominating fashion.

3) Pete Carroll has the Seahawks playing good football right now. Their defense is legit, and offensively it was a masterful game plan against the Patriots.

4) And then of course there's this. You Mad Bro? Tom Brady talked a little trash to Seattle DBs Earl Thomas and Richard Sherman, so Sherman tweeted the following; "He told me and Earl to see him after the game when they win..... I found him after...." 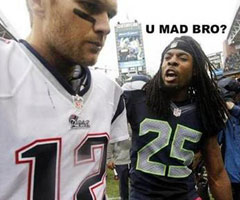 5) If you're the 49ers, how do you allow the Giants to come into your house and smack you around? It was a thorough thrashing by New York, and it looks as though they have their ground game in sync now. Bears fans won't like this, but the G-Men may have the best D-line in football.

6) After a rough week in Green Bay with dissension in the locker room being rumored, Aaron Rodgers went into Reliant Stadium and had his way with the vaunted Texans defense. Houston losing Brian Cushing is a big blow, but not the reason they gave up 6 TD passes.

7) I was surprised Robert Griffin III was cleared to play in a game a week after a concussion. But there he was, single handily beating down the Vikings. RG3 had 182 yards through the air and 138 on the ground for 320 total yards. The Redskins had 361 total net yards for the entire game.

8) Could Sunday have been the last we see of Ravens linebacker Ray Lewis?

9) Who would have predicted after 6 weeks the 3-3 Miami Dolphins would be in first place in the AFC East? Well... technically their 3-3 record is tied with the other 3 teams in their Division, and with their 0-1 Division record they are listed in the 4th spot, but 'Fins fans will take it!

10) I don't think the big 38-10 win by the Buccaneers over the Chiefs was Tampa Bay righting the ship, I think it was more Kansas City continuing to be bad.

And making a rare Thoughts appearance is an 11th Thought...

11) The end to the Cowboys game was about as bad a clock management situation as you'll ever see in the NFL. The NBC Sunday Night studio crew pointed out just how lackadaisical the Dallas receivers were in getting back to the line of scrimmage. There's simply no excuse for the way that game ended.