When teams play with large leads, they tend to have different gameplans on offense and defense. Some teams pin their ears back and go for the throat, and some teams move to a more conservative approach from their usual plays. Determining when that transition is helps clarify context in using statistics.

A football team plays differently with a lead of sizable margin on both sides of the ball. When you play with such a lead: on defense, the defense will play differently, playing to the time and score, and on offense, they'll run the ball more, they'll take what the defense gives and punt more. You call plays to not only down and distance, but to time and score. With that in mind, there's a few stats that can be misleading, PPG, YPG, Completion Rating. So, I'd like to introduce the differences between Garbage Time and Effective Time.

Effective time is 'time in the trenches', times when you're making plays in close games, times when you're catching up when you're behind by 10 points, times you're trying to put the game away, make it noncompetitive and enter Garbage Time. Garbage Time is when you're playing from too far behind, or too far ahead to make the game competitive with the time left. Captain Obvious says: When you play to win the game, winning by 1 is all you need to win the game, and sometimes the score doesn't reflect the play of the game.

So, in order to further grasp this, you have to look at the individual plays. Assuming the 'any given Sunday concept', and each team actually starts with a 50% chance to win the game as the score is 0-0; the actions of the game increase and decrease either teams chance to win the game. The more plays you make to increase your chances at scoring, and scoring itself, the more likely you are to win the game. An example would be in Week 4, during the Chicago Bears rout of the Dallas Cowboys, during the first half, until 4:21 in the second quarter when Robbie Gould scored the first points in the game, it was still a relatively equal chance to win. Obviously you have to assume both team will score more points, but, it puts the Bears ahead, and gives them a greater relative chance to win, albeit a slim margin. 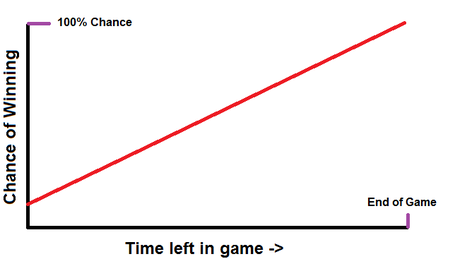 This really simple graph really says: if you score first, and neither team scores after, as the game progresses, your chance to win increases until you hit 100% at the end of game. It's a simple concept, but it factors into what we're going to do next.

When the percentage is relatively even, "Between the Twenties" if you will, a team is still in effective time. This is where you have to be effective with your gameplan. This is where being balanced, and playing to your strengths, according to your gameplan helps, it's where teams like the San Francisco 49ers make their hay. Low scoring affairs where they're able to stay balanced, run the ball, and put teams away with very modest margins of victories consistently. You could also look at strong defensive teams like Dallas, Seattle, Arizona, and Philadelphia, these teams stay in the game for a long time because of their stifling defense, but they have to continue playing strong, effective defense the entire game because often the games are close, the margin of victory small, and their offense has to continue trying to pull away.

Each of those 4 teams (not including SF) have point margin in victory or loss by an average of 1 touchdown in each of their games. They need to play at full efficiency, at least defensively, 100% of the game, because of how close the games are. When you start deviating from your game plan, you get what happens in Philadelphia in Week 6, when the newly departed Juan Castillo starts playing the game like it's no longer in effective time, that the game isn't close down to the wire, and lets Calvin Johnson singlehandedly wreck the team.

Teams with good offenses but poor defenses, like the Detroit Lions, or the Washington Redskins, who have to play 100% on Offense throughout the entire game also fall into this category, where you have to be perfect on offense in order to remain competitive, and when they're not, they'll lose close games.

And this is where Garbage Time comes in, it's the opposite of what those teams do, it's what separates the really good teams from the mediocre teams. Really Good teams spend a majority of the time in the second half in Garbage Time, while mediocre teams have to fight until the end. A quick way to look at it would be:

When teams have a relatively small chance to win, say, after the Bears go up 24-7 at 6:11 in the Third, after Lance Briggs intercepts Tony Romo and returns that ball for a defensive touchdown, the percent chance for the Cowboys to win gets smaller and smaller as time passes. And as that percent chance gets smaller and smaller, teams like the Chicago Bears end up playing differently. What we call the 'prevent' defense that gives up a lot of yards, and a lot of points, is actually a calculated risk that allows 'buffer' points to be used. Other teams, while in garbage time, get considerably more aggressive, and feel that giving up big plays is an OK risk in return for turnovers and sacks.

Teams like Green Bay and Detroit exemplified this last year. New Orleans, with Gregg Williams as DC, was a big proponent of this as well. When your team gets out to a large lead, you can throw the book at them, and create pressure, and cause confusion and increase that gap further. When you're playing with a large lead, you can let your pass rushers go full bore and not care about the run game because the run game can't hurt you with the time left, and the deficit to shrink.

It's what happened in San Francisco last week against the New York Giants. 5 sacks when the point differential was 17 points. How many times were the Niners able to run when the score was like that? 0 times. What's the Niners offensive strength? Strong running. How did the Giants respond in garbage time? Hand the ball off to Ahmad Bradshaw and David Wilson, who ran for 105 yards. The Giants played passively on offense, instead of running up the score, and putting further separation from the Niners, they knew that their defense would prevent them from scoring 17 points, and allowed them run the ball, spread the load, and win the game in garbage time throughout the majority of the second half.

When you're up 17 points, three scores, and you have one and a third quarter to go, you've spent the last 39 minutes playing effective football, sometimes you play it differently. Instead of pinning your ears back and going for the kill, sometimes you play passively, use that buffer. The Bears were in the same situation against the Colts, 10:06 in the 3rd quarter, Bears up 34-14, what do the Bears do? Force the ball to the middle of the field, force them to chew up the clock with only 'Cover 2 throws'. You know the type, the ones where you get short, high efficiency, middle of the field plays, the 'prevent' defense, with the safeties 20 yards deep and the LB's not pressing up hard against the line.

Take a look at the next few drives:

5 minutes, 12 plays, force the offense to make short, high percentage passes, and not allow them to take a lot of deep shots, and most importantly, not stop the clock to move the ball. 40 yards. A majority of those yards though, came from two passes, one to Reggie Wayne, one to Coby Fleener. Both were in soft spots of the zone. Both resulted in few YAC. Fleener's reception came right in the seam, and Wayne's was deep on the open side, between the CB and the Safety. But notice, both of those passes remained inbounds, the clock kept rolling, and even in a hurry up, no huddle offense (which this was not), time keeps flowing, keeps passing.

Again, 12 plays, 74 yards, 5 minutes. The Colts happened to score on this possession, but, they weren't allowed to strike deep, or strike fast, they had to convert a 4th down and take time off the clock. A the beginning of the 4th quarter, the Colts were down 20 points, and taking 5 minutes to score would require 15 minutes to score 21 points, and that's assuming offside kicks were successful too.

Contrarily, on offense, the Bears ran the ball. Ran the ball a lot, but unlike the Giants, weren't afraid to force the defense to play honest against the pass.

But, as they ran the ball, they took their shots, they ran the clock down. 4 minutes, 7 plays. We talk about it as 'foot to throat', but, in reality, it's about taking what the defense is giving you. When you're ahead with a lead, your defense has to defend the run, have to get the stop, have to take away your ability from moving the chains. As an offense, it forces you to do two things you don't want: Take Deep Shots and Lower Percentage throws to stop the clock, and run the ball for few yards. Green Bay did this often, once they established a lead, they exploited the one dimensional defense with their short passing game. Much of it was in Garbage Time, but that was because, as I noted before, they were building a buffer to allow the defense some leeway to play more aggressive and give up big plays from time to time. It's why the Packers defense, while not great, is actually relatively effective during 'Effective Time'.

When playing without the lead, the Packers defense has a hard time slowing down an opponent, but, with the lead, they were able to use a heavy pressure, opportunistic defense to put space between the teams. They're 2-4 (out of 23 games) in games they're not leading going into the 4th quarter through the beginning of last year, with losses to the Kansas City Chiefs, New York Giants, San Francisco 49ers, and Seattle Seahawks (with wins at New Orleans in 2012 and Detroit in 2011). Yes, the stat is a bit wonky, but, when you apply the context that the average margin of victory in those games was 6.5 points,? You see a team that, in close games, isn't as strong defensively in close games. Average total points in the last 23 games by the Packers? 52. Average total points in those 6 games? 46 points.

Garbage Time and Effective Time aren't hard and fast rules, they depend greatly on the status of the game and the teams at hand, what your strengths are, and what your weaknesses are. By pointing out effective time stats, and garbage time stats, you're able to get a better clarity of how good a team is, because if you collect 6 sacks when your up by 24 points, how relevant is that? If you pass for 350 yards, but you were down by 30 the entire time, how relevant is that? When you look at the Bears, and see are they a 'balanced team', figure out, are they running only to wind the clock down, or are they running well during effective time? Stats are nice, but knowing when teams are imposing their will when it counts leads to the better ability to accurately indicate and evaluate team weaknesses and strengths.