The Bears' front four has been dominating opposing offensive lines using a new package designed to beat the pass. WCG breaks it down.

The dominance of an offense can be judged by how well it can execute a a play - run or pass - despite everyone in the stadium knows exactly what's coming. On the flip side of the coin, a defense can be judged by how well it can shut down the opposition in such situations: if you can stop a run on third and short and a pass play on third and long, you're playing solid defense. Rod Marinelli has developed a great sub package for this second scenario, a personnel grouping designed specifically for passing situations. This "Four Rushmen" package did wonders against the Jacksonville Jaguars.

The Bears' starting defensive line features two edge rushers - Julius Peppers and Israel Idonije - and two big guys in the middle - Henry Melton and run-stopper Stephen Paea. In obvious passing situations, however, Marinelli has taken to the notion that his defense would be best served by getting the best four Rushmen into the game regardless of their listed positions. In this package, Paea comes out of the game, Julius Peppers swings over to defensive tackle, and Shea McClellin comes in at defensive end. Speed on the edges, speed and power in the middle, and way too much talent to block all of it.

Blaine Gabbert discovered what happens when you have these four pass-rushers all coming after you early in his outing against the Bears. With Jay Cutler opting to help the poor Jaguars out by giving them the ball on the edge of Bears territory, it was up to the D to keep them out of scoring range. After an quick incompletion and a one yard run, the Jags were facing third and nine on the Bears 48. With Jacksonville in an obvious passing down, Rod responds with the obvious counter, showing an all-out blitz with this "Rushmen" package. Here's how they lined it up: 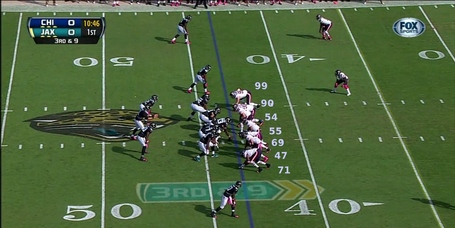 McClellin (99) is out on the left edge of the offense, with Peppers (90) lined up just inside of him. Urlacher and Briggs (54 and 55) are aligned across from the center, showing a Lovie Smith staple, the double A-gap blitz. Right before the snap, Chris Conte also sprinted up to the line, threatening to blitz between Henry Melton (69) and Idonije (71) over on the right side. This look could confuse the quarterback - he sees man coverage at the snap but ends up with zones - but the main goal is to confound the blocking scheme in front of the quarterback. With the center first having to make sure Briggs and Urlacher don't blitz, it will be much harder for him to support his guards, who otherwise have to block Peppers and Melton by themselves. The end result of all this confusion for the offensive line? The center waits for a second, then chooses to help block Henry Melton to his right. Only problem is, both Peppers and McClellin are now getting singled. 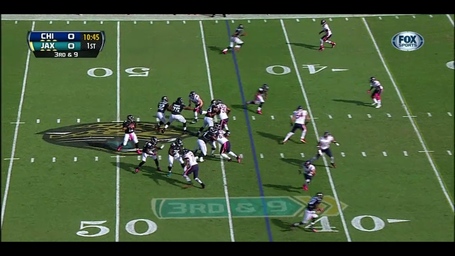 Conte, Briggs, and Urlacher all drop into coverage, cutting off Gabbert's primary options, a pass to the tight end running up the left hash or to the receiver in the right flat. Meanwhile, McClellin and Peppers are both able to bring the heat against their single-man blocks. With Peppers about to break away from his blocker and McClellin pushing the left tackle back into Gabbert's lap, Gabbert pulls the trigger on his dump-off option to Maurice Jones-Drew. With MJD hearing the footsteps of Urlacher, Briggs, and D.J. Moore nearby, Jones-Drew turns his head around too soon and drops the pass. The pressure from the front four forced the issue, and the zone coverage behind it made sure the pass available to Gabbert had no chance of success.

For fake blitz looks like this to work, you actually have to bring that pressure sometimes. The Bears did exactly that in the third quarter. With the Jaguars backed up inside their own ten and facing another third and nine, we get a surprisingly similar look from the Bears. The Bears once again lined up with Idonije, Melton, Peppers, and McClellin across the line, with both Briggs and Urlacher were milling around the line of scrimmage at the snap. 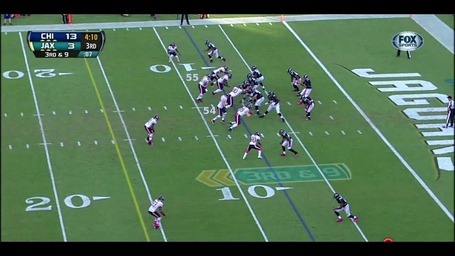 The Bears have one safety (Chris Conte) way over the top of this formation so they don't get Berrian'd, and Major Wright is playing center field on the left hash to defend against any possible slant or crossing routes, but the rest of the secondary is in man here. With Charles Tillman, D.J. Moore, and Tim Jennings manning up on the three wide receivers, it is up to Briggs and Urlacher to cover the tight end on Gabbert's right and the running back to his left. Should either stay in to block, however, it's up to the Bears linebackers to beat that block on their way to the quarterback. Here's how the play develops about a second after the ball is snapped: 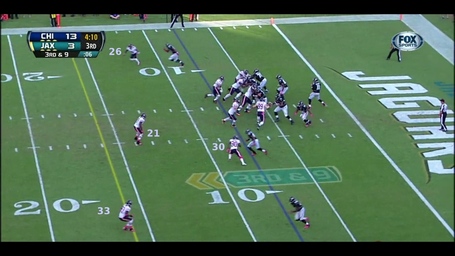 The key to this rush package getting home is protecting against the quick pass, and Tim Jennings and D.J. Moore ensure that Gabbert has no quick option by playing excellent man coverage. And while Tillman is playing with a big cushion, Gabbert never swings his head around to look at this receiver, so Gabbert has to wait for someone else to get open. While he waits, the running back to his left sneaks out of the backfield on a route, drawing Urlacher with him. The tight end to his right, Marcedes Lewis, has stayed home to block, and Lance Briggs accordingly brings a delayed blitz. Unfortunately for Lewis, Briggs is simply too much to stop:

While Briggs came up short of scoring an easy two here with a safety, the damage had been done. This Rushmen package is a deadly weapon against the pass, as it get at least one of the Bears' elite pass-rushers in a one-on-one matchup. The Bears can fake a blitz to confuse the blocking scheme, as they did in the first example, or actually blitz, like they did here, but the end result is the same: somebody's going to get into the backfield.

By eschewing run defense in favor of pure pass-rush, Rod Marinelli has cleverly adapted the look of a 3-4 front into his 4-3. Why bother leaving two run-stuffers in when it's obvious the other team is going to pass? Instead, take out a tackle, bring in an "outside linebacker" in the form of Shea McClellin, and set them all loose on the QB. If a team does try to run against this look, they will probably discover that Julius Peppers is just as good against the run as he is against the pass. If teams go max protect against this look, the Bears will retreat into zone coverage and comfortably rely the front four alone to get it done. So, when you see Peppers slide his way into the middle of the defensive line, get ready - somebody's fixing to get a sack.