The Bears came out strong on offense, scoring their sole touchdown against the Lions on their opening possession. Was it because of their left guard and tackle, or in spite of it?

There's one subject I avoid touching in my X-and-O breakdowns: offensive line play. I don't avoid the topic because the o-line is so bad it upsets me to write about it, but because it is very hard to evaluate how well the line played without knowing the exact play-call. Sometimes, a guy is supposed to let someone into the backfield untouched, after all. Still, I figured now was the week to look at this hardest-to-assess position group, if only because the Bears look prepared to play grind-it-out football as long as their defense stays hot. On that first drive, I saw some strong blocking from Chilo Rachal and J'Marcus Webb, but there was also a bit of ugly mixed in there. Still, when it mattered most, Rachal and Webb held up their end of the bargain and were instrumental in getting the Bears into the end zone on their opening drive.

While the national media loves to give grief to Jay Cutler, no one has had more hate piled on him by the Chicago media than J'Marcus Webb. On the Bears' first play from scrimmage, however, it was his next-door neighbor Chilo Rachal who played the role of goat for the play. The Bears lined up with a tight end close to each side of the line, with Jay Cutler under center and Forte the lone back. 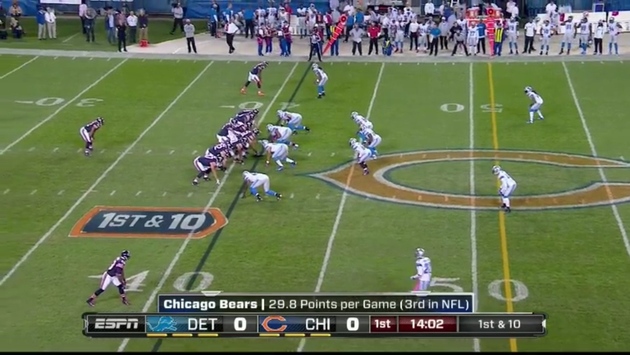 The Lions are in their base Cover 2 look here, and with only seven men in the box, Cutler opted to audible into a run play. Smart move on his part, as he has seven blockers to wipe out the seven men the Lions have close to the line, but for this plan to work, each blocker has to win a one-on-one matchup. The blocking scheme the Bears used here is straightforward enough: block the man in front of you, and if there is no defensive linesman in front of you, go get a linebacker. Chilo Rachal, however, has a bit of a problem on his hands, as he is lined up directly across from 300 pound defensive tackle Nick Fairley. 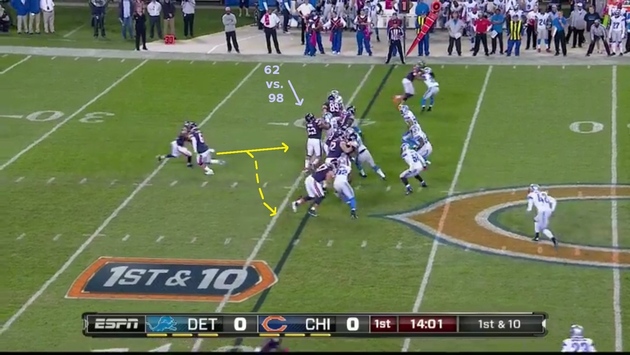 Every Bears blocker has managed to get a push on his man by this point in the play, except for Rachal. This causes problems for the play, as Forte was hoping to hit the hole that should have opened up right where Rachal happens to be standing. Forte is forced to veer away from the solid yellow line he would have liked to run on, and instead took the cut-back option dotting away to his right. Lions safety Amari Spievey (42), who quickly read the run and was already rallying to the ball, got himself in a perfect position to take away the edge from Forte. 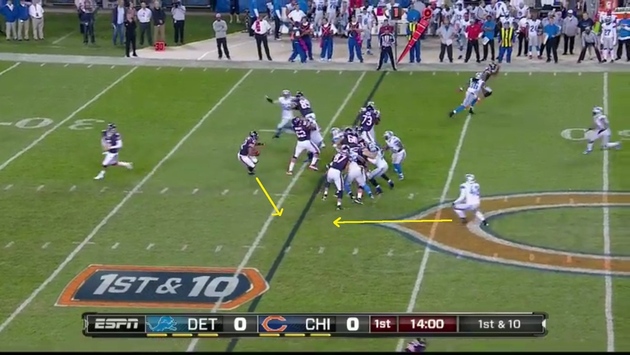 Spievey meets Forte at the line of scrimmage, and it is all Forte can do to fall forward and get a cheap yard or two out of the blown-up play. Jon Gruden blamed TE Kellen Davis for this one not working, but as I see it Davis did a great job on his block here: he blocked his man from the right hash all the way over to the left hash, and is the only reason Forte has a cut-back option at all. Had Rachal gotten a better push on his man, however, Forte would have gotten into the second level of the Lions' defense, as J'Marcus Webb and Matt Spaeth did a good job of taking care of their business on the left of the line.

With RG Gabe Carimi completely whiffing on Cliff Avril on the next run play, which also went for close to nothing, Jay Cutler faced an immediate third and long. You would expect the Lions to send pressure, but they chose to send eight into coverage to prevent the equally obvious pass to Brandon Marshall. Here's how the Bears lined it up: 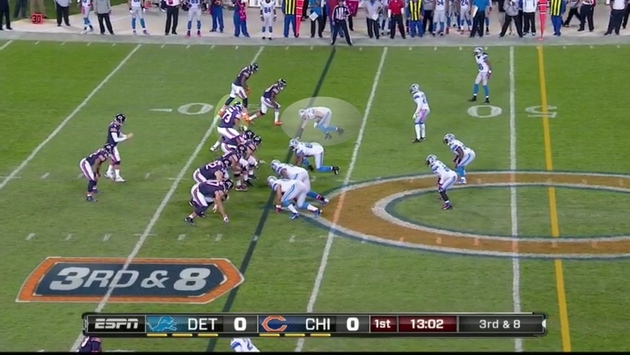 The Lions Wide 9 look puts J'Marcus Webb in the unenviable position of having to block Kyle Vanden Bosch (highlighted) by himself, but Webb gets the job done despite the strong bull-rush that Vanden Bosch puts on him. 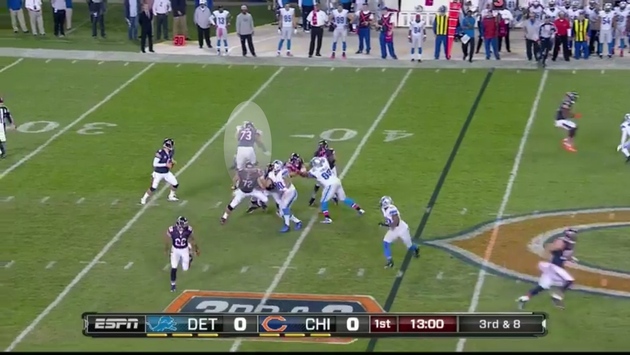 Webb ceded ground to Vanden Bosch, but he never let him get past. At just the right moment, Webb turns Vanden Bosch's momentum against him, shoving him past Cutler and out of the play. Since nobody had managed to get open for Cutler, he takes off through the hole Webb and Rachal have opened up on the left side for him. 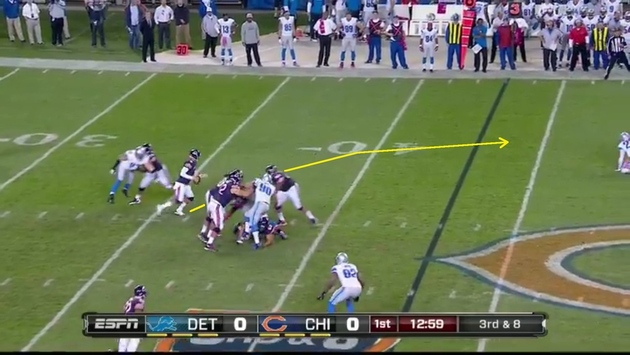 Webb managed to save the day on this one by keeping Cutler clean, and Rachal does his part as well, holding the edge against the two defensive tackles while Cutler ran past them. Nice work here by both linesmen.

The right side of the line once again played the role of goat on the next play, letting Cliff Avril in off of the right edge to harass and eventually corral Cutler for a sack and half-yard loss. Despite the lack of success on the ground during this drive, Tice and Cutler remained persistent. Instead of a straight-ahead blocking scheme, however, it was time for another football classic, a power run off of the left side. This, of course, puts our LT and LG right in the thick of it. If they miss their blocks here, it's a run for no gain, but if they do their jobs, it's a big play. 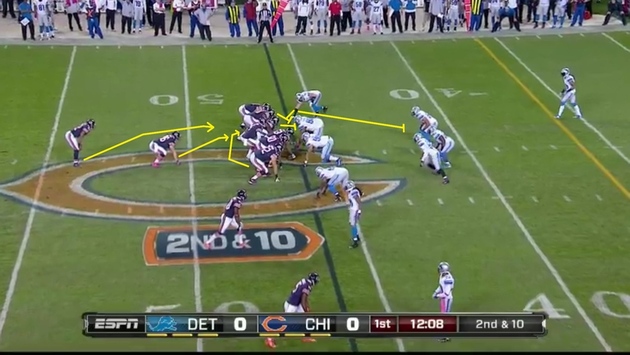 While the link above can give you a much more thorough explanation of what's going on here, I outlined the key blocks that happened on the left side of the line. Rachal needs to push the big guy to his inside past the center and out of the way. Webb starts the play by helping Rachal block the defensive tackle, but he then must quickly release to get after the linebacker ahead of him. Once Rachal and Webb have secured the running lane, the fullback and pulling right guard (Lance Louis) will escort Forte into the hole, with each of these two blockers hitting the first defender they find. As you already know, every man on the Bears does his job perfectly: 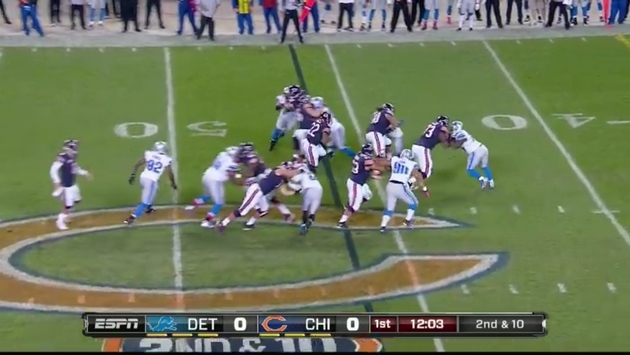 With Webb and Louis leading the way for Forte here, Detroit didn't have much of a chance getting Forte until it was too late. While the big guys might struggle blocking someone equally as big as them, linebackers don't stand much of a chance of stopping Webb once he's got a head of steam going. Heck, once he got rolling, Webb did his best to keep pace with Forte:

Webb did well here as a run-blocker, as did Rachal. While I might not be changing my citizenship over to the J'Webb Nation any time too soon, I do think he has become less of a liability as he has in seasons and games past. If only Gabe Carimi could shake off the rookie mistakes, the line would be downright mediocre. With the Panthers coming into Chicago already licking their wounds on defense, however, I think we will see a strong performance from the whole group this Sunday, one that the team can build off of as it gains momentum moving into the toughest part of its schedule.