There's been rumblings about certain first round picks by the Bears over the past week. Chris Williams is up and gone, Gabe Carimi looks like our weakest lineman, and Shea McClellin has to show something, prove something in his first year.

When the Chicago Bears played the Detroit Lions, I feel like there was a certain spotlight on Shea McClellin, as he's had a bit of time to settle in the system, learn some things, and maybe show us that he's improved since the last time he saw some considerable playtime. I wasn't disappointed this past week. What I wanted to see out of him was his ability to play the run, his ability to lock on to a defender and control his gap without getting blown off the line of scrimmage. You don't want to see him getting blown back, but you don't have to see him destroying who's blocking him on the O-Line like Julius Peppers would do. Managing expectations of what you expect your top level talent to do is something that's not easy to quantify. But I felt that coming into this season, the things you want to see from McClellin is as follows:

Some of these are hallmarks of defensive line play for the Bears, maintaining the contain against outside rushers, executing stunts, are keeping the play flowing towards the linebackers. These are mental processes that an effective member of the Bears line has to learn. The others, the outside speed, and the closing speed, and the run game, are particularly towards the strengths and weaknesses I felt that McClellin had coming into the Bears. In a previous writeup about the NFL draft class of 2012, I talked a bit about my opinion of Shea McClellin, and I don't feel my criticism levied at him was unwarranted. I was definitely wrong about where I thought he'd be drafted, but as the story goes. It doesn't matter where your drafted, when you're drafted. You're here, you're playing.

I wrote about McClellin saying:

McClellin on the other hand is a different prospect... he moves well in space, isn't overly fast, but he moves so much better on the field. I think that timed speed doesn't do real game speed justice, and how well his reaction time is off the ball, and his absolute control of gap assignments. I used relentless once before, but this guy, he's like KVB levels of relentless, no loaf, 100% on every play... and what makes it amazing is that for a DE, his stamina is fantastic. He's not overly powerful, but he's stupidly energetic. McClellin has probably the bigger upside, but the lower base.

And that's what we've seen. It hasn't been a mirage of ability on the field. But this is the NFL, you have to do it better. You have to get better, and you have to show the flashes of potential early. The question is: Has he passed the...

Now, I won't say it was a breakout game for McClellin in Detroit, but to see him playing effective ball regardless of the down and distance was more than I thought would be his game for the first year, he's passing the AQ test, not by flying colours, but by little steps at a time. And, even though the speed of the NFL demands results 'now, now, now', it's not always the best way. Patience helps reach ceilings, especially in learning. Throwing people in the fire with full responsibility isn't how you develop talent in the NFL, it's building blocks, and something I feel that Rod Marinelli and Lovie Smith constantly strive for through redshirting and old school limited starts. When McClellin was picked, I felt he would be used in a Mark Anderson role. Third downs, passing situations, sack machine. But, you have to look at Smith too. He was burned by Anderson by handling his development that way. I think what we've seen from Smith and Marinelli is a conscious decision to work with the tools they have, and teach McClellin the new Bears way. The Boise package? When you break it down, it's entire goal is to get the pass rushers into space. It's about getting McClellin in as a free blocker by moving pre and post snap to confuse responsibility, and allow him to be effective in executing stunts, while adding another wrinkle in a disciplined defenses arsenal. It's adding something McClellin is familiar with, with the mental responsibilities of what the Bears line is responsible for.

When he's outside with his hand in the dirt, he's been lining up, what I feel, is just a body width or so wider than what everyone else lines up. Not quite in the wide 9, but definitely just enough outside the tackle where I feel when McClellin goes from his hand in the dirt, on those five step drops, he'll brush by the tackle and use that outside speed to force the pocket up.

Real early in the Detroit game, 1st Quarter, Third offensive snap, 3rd and 6, Bears come out in their Nickel with Urlacher, Briggs and Conte mugging the A and B gap, and McClellin is heads up in 4 point between what looks like Brandon Pettigrew and Tony Scheffler, in a 2 TE set on the left side of the formation. On the snap, it's a 4 man rush, Conte, Urlacher and Briggs drop into coverage and McClellin is too far outside Jeff Backus to engage him off the snap. This his how the wide 9, which Gunther Cunningham and the Lions have been partial to, works. On five step drops, like what Stafford does here. There's a wide open lane for speed guys like McClellin to attack the point of the drop. Backus does a good job of moving behind him to get and engage McClellin, and this is where I feel McClellin showed me where he's going to be good, but not quite yet. As he reaches the apex of his rush with a full head of steam, he has the lateral motion to move back and essentially jump at Matthew Stafford. With more seasoning, McClellin uses his hands earlier and rips over Backus and makes a sack there. Even this early, his presence, and Stafford's vision of McClellin out of the corner of his eye, probably lead to the throw that was timed too early and incomplete. This is one of the looks that Marinelli wants to give to the opposing defenses, like in the following triptych...

In the run game, on a non-clear running down, the Bears come out in a 4-2-5 over set (below), with McClellin out wide of the LT, and Kelvin Hayden playing in the slot, but nearer to the formation and the line. Lions in the single back 3 wide formation with the TE on the right side of the formation. Nothing fancy here, just a bit of run game one gap responsibility, with McClellin standing on the outside containing, using good handwork (i.e. one hand on the LT) to keep his other hand free and able to release into the runner if he cuts outside. 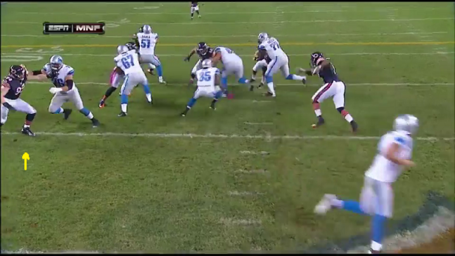 What I'd like to have seen here is a little more strength in not getting turned as much by Backus, and that's something I think will happen in time. It's a bit of lower leg stregth that I think isn't quite there yet, from this and other plays, but the technique is mostly what you want to see on plays like this.

One of his best plays last night was something I felt really left me feeling like his instincts though were as good as I've thought. Before the snap, McClellin takes a step further outside, and the RG pulls left to down block McClellin. He blinks at the fake draw, holding up his momentum to maintain his assignment as the play could develop right at him. McClellin uses that to Akido-style push off of the RG, Stephen Peterman, by using his movement against him and lunges at Stafford. At the same time, Corey Wootton takes on RG Gosder Cherilus, gets him to go too far downfield, executes a sweet spin move, and Stafford moves up into the waiting arms of Stephen Paea (who was just chipped by Mikal LeShoure), and it's just a sweet move on the slow developing fake draw.

Put it all together... it looks a little like this.

Is McClellin 'here' yet? No. Will he be? That's still up in the air. But from what I've seen in this game, and the past few, he's making slow, noticable strides in the way he handles and conducts himself on the field to play disciplined Bears football. I can't tell you now that he's going to be the sack artist we've waited for to rack up 16 sacks. But, will he be someone who makes plays on the line? For years to come, I believe. I think McClellin will be a good #2 DE on the line, the Robert Mathis to your Dwight Freeney. I think that's a reasonable goal for him, and a fine, managed expectation of a first round pick. I don't think he's going to lead the league in sacks ever (schematically, if the Bears ever lead the league in individual sacks, I do think something would be wrong), but I do think he's can develop into the effective 8-10 sack guy from the outside who can create pressure when teams want to pass.

Here, McClellin gets across the back of the field, and with a little bit of traffic on the right side of the formation, LeShoure can't get around the corner and McClellin flies down the field. Also. Urlacher on that play was just ridiculous, That's what smart players do, be patient, wait it out, close off the corners.