Cutler and Tice spread out the love and the ball on Monday. Here's how it worked.

Devin Hester was at least nice enough to come out and say it: he just wasn't feeling the love anymore. Brandon Marshall was also less than pleased, and just like Hester, he has been trying to squeeze just out a little more love from an already-enamored Jay Cutler. Well, the two got their wish on Monday's game against the Cowboys vaunted defense. Marshall was set up for success to the tune of eight catches, and also played his part as set-up man to get Hester on the scoreboard for the first time this season. Even with all the love being spread out between the receivers - heck, even Dane Sanzenbacher saw the field for this one - Jay Cutler got the biggest present of the night. Cutler was put in straightforward, "read one defender and throw" situations, and with the time he was given by the offensive line, he was able to make sure that Tice's goodwill was spread around the field to the tune of a touchdown for each of the scorned receivers.

You can argue back and forth about what truly makes a number one receiver a number one receiver, but I think we can all agree it includes being able to consistently take on a double-team and win. No slouch, Marshall did himself one better than this on a third-down conversion play, zipping through the zones of three different defenders and winning. Lester is right to give praise to Kellen Davis, as his believable-enough decoy route is what made the whole thing happen. 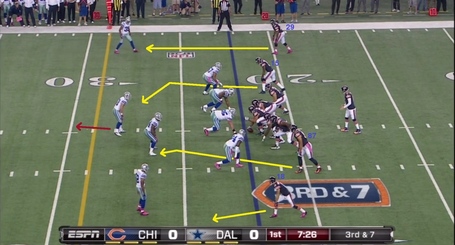 The Bears emptied out the backfield for this one, moving Michael Bush (29) out to the WR position at the top of your screen. Marshall (15) lined up in the slot below him, and Kellen Davis (87) and Dane Sanzenbacher (18) rounded out the gang down on Cutler's left. The Cowboys obviously expected a pass - there's no RB in the backfield, after all - but opted to drop eight into coverage instead of bringing the rush. The nickelback across from Marshall has the job of slowing Marshall's progress for a couple of yards before releasing him, as someone had to stay close to the line of scrimmage to keep an eye out against a QB sneak or a comeback route by Bush. The middle linebacker across from Kellen Davis, who is responsible for the space from five to ten yards past the line of scrimmage, is the key read for Cutler. If the linebacker simply waits for Kellen Davis' route to come to him, Brandon Marshall will come open as he transitions from the short zone to the deep zone being covered by the other middle linebacker, the one whose motion into the backfield is shown above in red. But if our first linebacker makes the wise guess that Cutler is thinking Marshall here, Davis will come open - the LB loses either way. Here's how it looked after the LB decided to stay on Davis, with labels for the three defenders whose zones come into play. 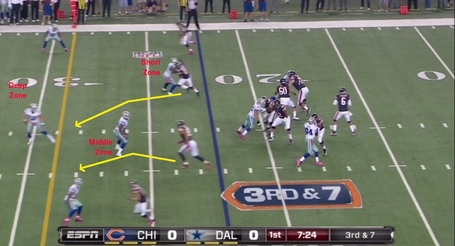 With the protection holding up well against the three-man rush, Cutler has time enough to make his read of the middle linebacker. Marshall powers his way out of the press coverage, strides into the window between the two middle linebackers, and strolls his way into first down territory after making the catch.

A lot of the Tice/Bates passing game against Dallas was focused around "two receivers versus one defender" type of plays for short yardage, but the pair didn't completely rein in their inner Rex Grossmans: they wanted to go deep. Who better to answer that call than the also-unhappy Hester? Give 'em some love, or at least some single coverage: 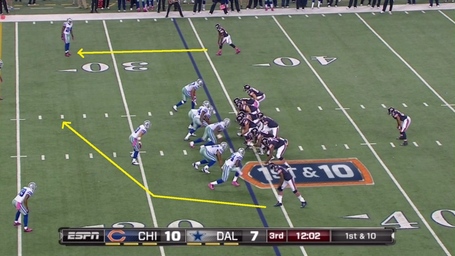 Right now, the defense has a safety over the top of Hester - you can barely make out his shoes poking into the shot above the right hash. But the D isn't going to make the mistake of leaving Marshall in single coverage to double up lowly ol' Hester, since Marshall (left slot above) did just burn the 'boys for big yardage on the last play. Marshall's route out of the slot puts him just into the safety's zone, and the safety can't resist the temptation of doubling Marshall. With the double-coverage on Marshall, Hester has two simple jobs: make one guy miss, and get open. 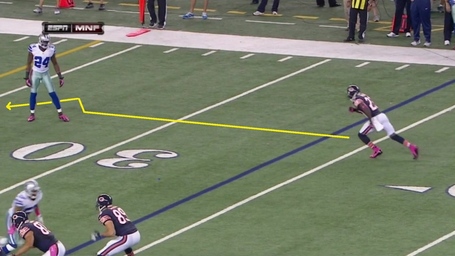 Hester's route, which has him start out by running right at his defender, presents Morris Claiborne with a puzzle: Hester could continue to run straight down the field, or try to cut around the him to either side. Hester takes advantage of the rookie's indecision by sprinting forward, selling a perfectly executed fake to the right, then pivoting hard back to the middle of the field. With Claiborne now three steps behind and the safety still doubling Marshall, Hester is ridiculously open. He scoops up the pass and rolls his way into the end zone.

There's really only ever been one trick in the Ryan family playbook against a team's passing offense: the defense can always bring one more guy than the offense can block. The problem with this, as Buddy found out against the Dolphins in '85, is that you can beat an all-out blitz with a lot of short passes: quickly toss the ball over all those defenders running at you, and you've already knocked seven defenders out of the play.

Still, with the Bears up in the fourth quarter and edging their way into Robbie Gould's field goal range, blitz they must despite the risks. This one is an all-out, eight-man rush, but the play Cutler dialed up was the perfect response: 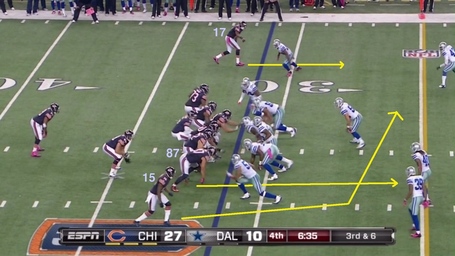 Jeffery, who is helpfully pointing out to anyone who cares to notice that the cornerback across from him is blitzing, simply works straight up the field. Cutler probably already sniffed out the blitz, as Brandon Carr (39) followed Marshall (15) while he motioned across the formation, signaling man coverage and a high likelihood that the Cowboys aren't bluffing here. Man coverage on Marshall is always a good thing, but doubly so in this play - Carr gives Marshall way too much room at the snap. Carr conceded the first five yards to Marshall, but Kellen Davis is able to make sure that Marshall gets the rest of them as well. 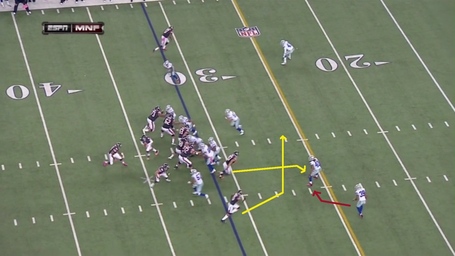 Once again, Davis' route is run right at his defender. Had Carr played up closer to Marshall, he might have had a chance to avoid being picked out of the play by his own man, but Carr retreats with the assumption Marshall is heading straight down the hash. Marshall converts his route into a slant at the perfect time, putting both Kellen Davis and his defender in between Carr and himself. The real key to this play, however, is our old whipping boy J'Marcus Webb. Out on the left edge all by his lonesome against DeMarcus Ware, he stones Ware's bullrush, which forces Ware to try to stunt his way through the middle of the line. Before Ware or anyone else can get to Cutler, however, Marshall comes free over the top. From there it was pass, catch, touchdown. After that, it was Orton time: the game was over. The Bears offense executed a perfect blitz-beater.

Cutler once again got dinged in the media for "BAD LEADERSHIP!!!#*1!!" due to his tiff with Tice during the game, but few have commented on the two major positives I saw out of him in this game. One was on the field, feeding two of the bigger egos on the teams with touchdowns to keep them happy. The other came after the Marshall touchdown. ESPN showed a shot of Cutler talking to Webb after the play, and you can see Cutler saying something to the effect of "You made that touchdown happen." And if the pass-blocking and play-calling continues like this, look for a lot more touchdowns and a lot less moping.