There were many clamoring for the Bears to "Pay The Man" as Matt Forte's contract expired last season. As the season nears 75% completion, was that money as well spent as it could have been?

Two games out of 11 left with an ankle injury. One game missed entirely.

And so the story of #paytheman goes. Fan favorite, and now oft-injured running back Matt Forte got his money, but his production is presently leaving something to be desired. Ranked 18th in the league in rushing, here's Matt's stats on the ground:

Well, it is and it isn't, considering he's paid to be a top-10 guy, and he's not producing anywhere near a top-10 level. But let's look at yesterday's game as a microcosm of his 2012 season, and compare it with the other prime player at his position, back-up Michael Bush.

"But Kev", you'll say. "Forte obviously went out with the injury, so his stats would've been much better."

Would they have, though?

Let's take a look at something real quick. Here's each player, and their down, distance, field position, and length of carry on each rush. 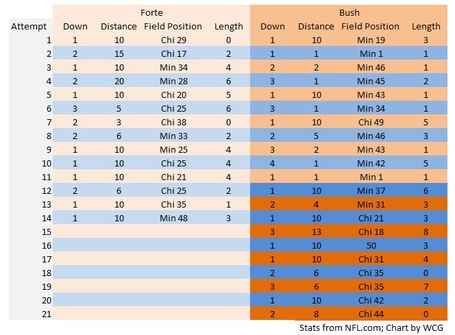 Note, the darker-shaded area for Bush is every carry he took after Forte went down with his injury in the 3rd quarter. This includes the last five attempts, which all occurred during the last 2:28 of the game.

Here's some things that stand out. Forte's first rushing attempt for 0 yards is where he fumbled it. Note also his 7th carry, which also resulted in zero yards. Generally speaking, Forte was in when the Bears were looking at an early down, or a long distance. Bush, on the other hand, has multiple instances where the Bears have a yard or 2 to go. Now also note, Bush had two carries in First & 1, at the Minnesota 1 yard line. He converted both of these for touchdowns. What stands out about that?

The Bears aren't putting their starting running back in on goal line situations, or even short yardage situations. How can you not trust the starting back to get the tough gainers when needed?

The need for a "short-yardage" back like Michael Bush says a lot about the abilities of the running back in the front, and the fact is, Matt Forte hasn't shown the ability to score consistently or convert the short situations. This has caused the Bears to invest a lot of money in the running back position, in both an over-paid starter and a highly-paid back-up..

Now nursing a re-injured right ankle as the Bears enter the most crucial stretch of the situation, it begs the question, was Matt Forte's contract worth it? Given what the Bears are going to have to do on the talent management front the next few years, I'm inclined to say no.

Matt Forte is no longer needed to be half the offense. He's not the receiving threat he was previously used as, he's not running as well as his contract suggests he should, and he's not used in conversion situations. So what's he doing here?