Despite the Bears' winning ways, many have grumbled about the slow starts on offense. Are there problems with the first-down playbook, or is the problem with our expectations?

The Bears defense has been rolling over opponents left and right this season, but the offense has found itself victim to such a fate on just as many occasions. Based on how the Bears called their first-quarter offense against the Titans, however, I suspect that this is as much by "design" as it a fatal flaw in the offense. Far from suggesting that Mike Tice is finding new and exciting ways for Jay Cutler to get sacked, I mean that the offense is playing with two simple rules in mind:

1. Don't call something that will lose the game for you.

The Bears have been content to chip off what yardage they can at the start of a game. With the defense having moved its way from being discussed as the best in the league to being discussed as one of the best in the Super Bowl era, all Jay Cutler has to do is not turn over the ball for an early drive to be "successful." Take sacks if you have to, accept three-and-outs if things don't go well out of the gate, but don't take unnecessary risks. In short, the plan on offense is to wait for the opponent to screw up first, and then to strike decisively. Instead of having Jay Cutler drop back for another first-down sack, run the ball early and often and wait until the time is right to go for the big one.

Content to start slow, the Bears took their greatest offensive strength - running behind their guards - and milked it for everything it was worth in the first quarter. After the Titans fell apart under the weight of a 28-2 first quarter deficit, the Bears broke out the "fun" stuff to the tune of three Brandon Marshall touchdowns. but the Bears had to set up for this good stuff with some ground-and-pound football. You can't run play-action and screens until the opposing defense is afraid of your run game, and after the first quarter, the Titans were plenty afraid of Matt Forte.

This set-up job started on the first offensive snap. After the Titans took all of one play to turn the ball over for the first time of the game, the Bears offense had the ball right around midfield. Tice and Cutler kept it on the ground with the first of many runs behind the unsung offensive hero of the game, RG Lance Louis. Here's how the first-down play began to develop:

It's a play that seems fated to succeed on this first glance. The two receivers - Devin Hester outside and Brandon Mashall in the slot - are strong blockers, and with Lance Louis (60) pulling out to the right side to lead the way for Forte, the Bears seem primed to punch this run into the Titans' secondary. A few problems develop as the play moves forward, however:

While Louis (60) is in perfect position to wipe out the linebacker and set Forte free, Marshall (15) whiffed on his block against the nickel-back, and the defender is able to rally and tackle Forte for a mere two-yard gain. The real problem is on the back-side contain: while all Kellen Davis (87) had to do was keep his man from swiping Forte's feet from under him, he also whiffed on his block and was forced into holding to keep containment. An A+ for effort, but an F for getting flagged. The Bears got backed up ten yards after the penalty, but ran the ball again behind Louis again on first and twenty for another minimal gain. This brought the Bears to second and seventeen, a for-sure passing down, right? Tice and Cutler didn't seem to think so...

The Bears try the whole "pull Louis as a lead blocker and get Forte outside the edge" again and find a bit more bang for their buck: Marshall makes his block, Webb holds his edge against the DE, and Louis leads Forte for a eight yard rumble. Sure, the Bears could have passed for a first down here, but Tice's foot is wisely off of the gas pedal. With the Titans in two-deep coverage, better to take the easy yards underneath and play for field position. The Bears rode this philosophy to a three-and-out, of course, but time would validate Tice's conservative strategy.

This first drive did a couple of good things for the Bears, despite its lousy outcome. The commitment to the run helped set up the play-action that was broken out on the next drive, and the run plays also gave the line that "go out and hit somebody" spark that helped set up the Bears' first offensive touchdown. After Devin Hester came up one block short on his first-quarter punt return, the Bears were in prime position to open up a 14-2 lead. Tice went to the sure thing one more time: another run featuring the blocking of Lance Louis.

From left to right, here's what the line ended up doing on this touchdown scrum. LT J'Marcus Webb (left edge) pushed ahead to block the weak-side linebacker, LG Chilo Rachal pulled out to help Kellen Davis (87) seal the right edge, and Roberto Garza and and Lance Louis pushed the two defensive tackles towards the left sideline to crack open a lane for Matt Forte. Like Webb, RT Gabe Carimi is also responsible for a linebacker, and heads straight after the MLB. He's lucky the ref's eyes didn't follow him, however, as you can see Carimi getting away with a bit of a hold as the blocking developed: 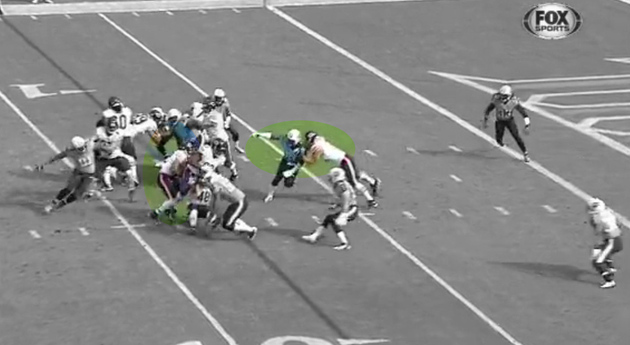 Carimi, circled on the right, has his man by the collar, but Forte (circled left) doesn't much care how Gabe gets the block done. Forte hits this admittedly tiny hole with a big burst and proves powerful enough to keep the play alive until his linemen can push the pile over the goal line for a touchdown. It's a touchdown for the Bears, and a validation of Tice's playcalling so far: thanks to Louis and Rachal, the line was able to get this one done on the ground.

Successful between-the-tackles running from Forte is a bit out of the ordinary, but so is Tice's commitment to starting off with the run. Having finally discovered how best to employ the blocking skills of his two guards, Tice was able to run the ball-control offense that this team was hoping for when they promoted Tice to offensive coordinator. The Bears O has proved that it can come up with points when the team needs them - see the Carolina game if you doubt me - but they have also gotten better at playing within the greater gameplan.

If Mike Martz's hope was to make Jay Cutler into the next coming of Kurt Warner, Tice's goal has become be to turn Cutler into a QB more like the Texans' Matt Schaub, a game manager first and a gun-slinger second. Schaub's most important job is handing the ball off to Arian Foster, sure, but Schaub is equally skilled at getting the ball to his receivers, especially Andre Johnson, once defenses have keyed into the run. Imagine that - an offense that makes its living off of its Pro Bowl running back and #1 wide receiver, one that plays smart football and keeps its defense out of tough-to-defend situations! Just like the Texans, the Bears don't need their offense to be world-beaters. Grind it out, get the points where you can, and long as the offense doesn't become Bears-beaters, Tice and Cutler will have done what they needed to.