Alshon Jeffery got a strong lesson in what exactly offensive pass interference is. Time for you to get the same.

Offensive pass interference has long been a penalty in the NFL, but until this season, it was rarely called. In case you missed last Sunday's game against the Packers, that has changed this year. There were times in that game that you had to wonder if the refs were feeling a bit sympathetic towards the Packers, who were victims of a missed offensive pass interference call in the infamous "Fail Mary" play at the end of their game in Seattle.

In the latest edition of the NFL rules, the rules for OPI are straightforward enough: take all the rules for defensive pass interference and apply them to the receiver equally. Indeed, the NFL rule book draws almost no distinctions between the receiver and his defender in their rules for interference. One of the few distinctions, however, was the first reason that Jeffery found himself on the wrong end of a penalty.

For reasons that are obvious, a defender can't get flagged for PI until the ball is thrown. Receivers, however, are under scrutiny from the moment the ball is snapped until someone touches the ball. In other words, what is perfectly legal "bump and run" coverage for a defender is a ten yard penalty for a receiver. Let's look at a few stills from Jeffery's first penalty. 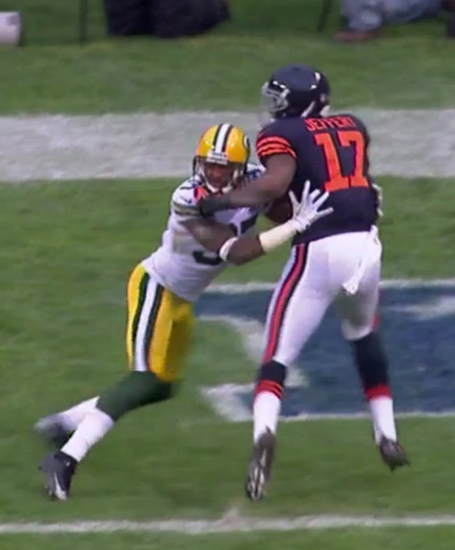 This is a moment after the snap on the ill-fated fourth-down touchdown toss to Jeffery. Based on where Packer Sam Shields' hands are, you could call this defensive holding. The rulebook, however, is definitive in allowing a bit of contact to defenders within five yards of the line of scrimmage: a defender can either "[maintain] continuous and unbroken contact within five yards of the line of scrimmage" or contact an eligible receiver "with a quick extension
of arm or arms." In other words, a defender can put his hands on a receiver or give him a solid push within five yards.

In that shot, it's an easy no-call - the contact so far has been perfectly legal. A half-second later, however, and Jeffery takes it a bit too far: 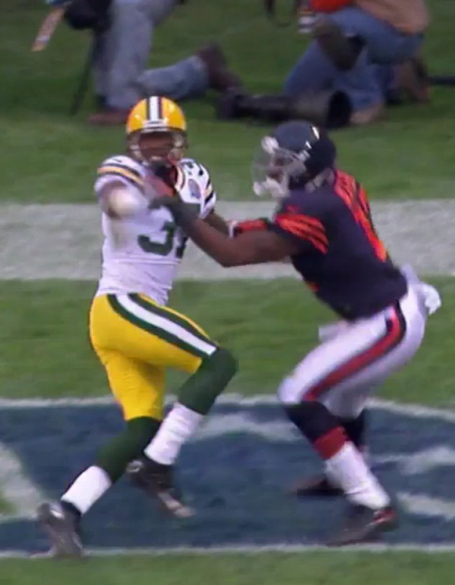 As the last of seven reasons a player can get flagged for interference states, a player cannot "[initiate] contact with an opponent by shoving or pushing off, thus creating a separation in an attempt to catch a pass." If a player gets his arm out that far from his body to contact an opposing player, it will get flagged every time. Put another way: would you have been upset if the defender did that to Jeffery and there was no penalty? If Jeffery wanted to fight off Shields, he could have. Next time, fight off his arms, not his torso.

That penalty was pretty nit-picky, but it was perfectly in line with what the rulebook says. There is no definitive film angle of the second OPI on Jeffery, but his third penalty might as well have been a demonstration on how to break the interference rule by illegally pushing off. 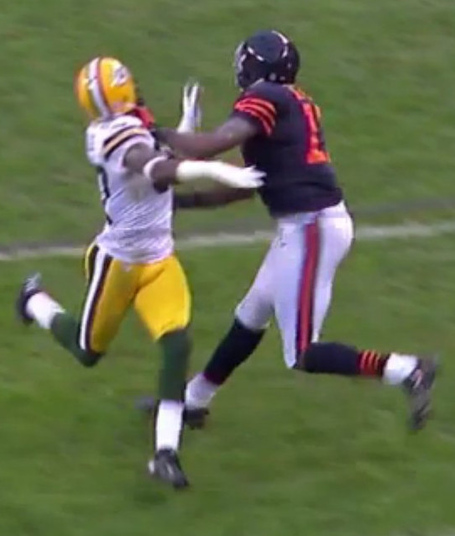 You. Can't. Push. Off. Brandon Marshall needs to have a chat with Jeffery about how to use your hands and body without getting flagged, as the elder receiver is an expert at breaking through tight coverage without drawing flags.

Here's what bothered me, though. The ref watching Jeffery was calling it real tight, but he let this slide on an even-more critical fourth-down play: 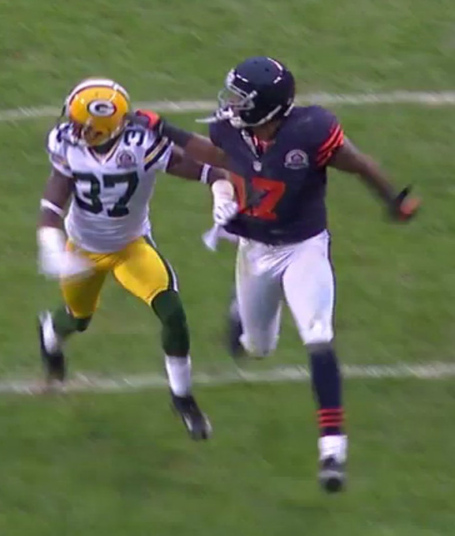 I call shenanigans on the refs and defensive pass interference on Sam Shields for this play. If Marshall is the one to teach Jeffery how to battle off defenders without getting dinged for it, perhaps Devin Hester can give him a lesson in drawing penalties when you're being contacted. In Hester's defense, falling down is easier than catching a ball...

I know that complaining about the refs is a refuge for losers, scoundrels, and Packers fans, but that missed call at the end was a pretty big mistake by the refs. You hate to see games "decided" by penalties, but just like the "Fail Mary," this one was decided by the refs completely missing one. Could Jay have finished the drive, gotten the two-point conversion, and forced overtime? We'll never know.