Nightmares for a Week: Clay Matthews

Clay Matthews has caused headaches for the Bears since he entered the league. Week 14's thrashing exposed the immaturity in the Chicago Bears offensive line.

Share All sharing options for: Nightmares for a Week: Clay Matthews

When the Bears faced off against the Packers, many of us were holding our collective breath at the fearsome man-head of Clay Matthews. All week he wasn't supposed to play, he was supposed to be out again this week.

But Sunday came, and there he was.

Now, I believe the Bears offensive line isn't the worst in football. It's not the worst right now, it's not the worst when they're actually healthy. They're bad, yes, I'm not going to tell you that they are going to be mistaken for an elite squad, but, there are certainly worse. Green Bay included. But, as I was watching, there was one play, one play I heard after the game spark a fire in me that wanted to quash a thought process.

This line must be terrible if it is wholly incapable of defending against a simple stunt, and it's all due to the coaching.

I heard this line, and was thinking, how do... what? I. Can't. Even. Do they even know why stunts exist or what their purpose is?

Lets explain it really quickly. A stunt is when a defensive linemen, or outside linebacker exchanges roles with a defensive lineman. The Bears favour stunts as their preferred method of creating misdirection and opening up holes for the defensive linemen in order to gain advantage and confuse the offensive line through miscommunication.

When people say, hey, the Bears aren't effective in confusing defenses, because they can't blitz like a 3-4 team, you say, yes, sure, you're correct, but what the Bears do is stunt, early and often, and effectively. It's something that's a classic technique that goes back to the time of the Steel Curtain's Tampa 2 roots.

It's something that's not a novel concept, and in 4-3 defenses, you most often see the DE and the DT in the 4-3 trade responsibilities, and there's a couple of different ways to go about it in technique on how the pass rushers originally engage, and then seek to hand off.

Very simply, you have this (from SBNation's Clemson Blog, Shaking the Southland) 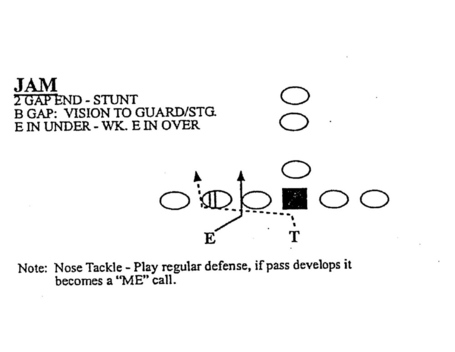 In this particular example, the right defensive end would penetrate in the B gap, and the Tackle would read the play, as it's happening, and much like an option route on the offense, make a choice as the play develops to either stick in the center of the formation, or loop over the end and try to pull a blocker to the right die of the formation.

Sometimes the OT will pick up the inside rusher when the OG passes him off, while waiting for interior pressure, sometimes the OT will help double block the inside rusher, especially one like Henry Melton or JJ Watt, who are legitimate pass rushing threats inside. Sometimes the OT will man up on their defender and follow them as they loop around. Sometimes they'll even travel over, not just one, but two linemen, in what's called a scoop. There's literally, dozens ways you can execute a stunt, and all have their merits and necessities in learning and executing in order to confuse offensive lines and their responsibilities. Not just in how you engage the blockers, but in who's stunting with who.

Rod Marinelli does a fantastic job with coaching the linemen the nuances of the stunt. There's very few teams in the NFL who run the stunt as well as the Chicago Bears, not just out of 4-3 teams, but in the entire NFL. The very first sack of the game, by Corey Wootton, was indeed on a stunt as well. Green Bay's interior linemen didn't do a great job of picking up Wootton, and there he was, in the middle, while Aaron Rodgers was trying to step up. Putting pass rushers like Julius Peppers and Corey Wootton into space is key.

The basic concept of stunting is to open up controlled spaces for players to penetrate, while this is great for passing plays, it's not as great against running plays, because, obviously, you're opening up holes where you're not going to have a great sense of gap control as you would in a tradition pass rushing front because of the movement on the line. When offensive linemen are moving, you're often get holes for good RB's or dual threat QB's to take advantage of. What obviously assists the Bears in executing is the quality of linebackers they have when they stunt and they happen to be caught against the run because of their ability to read and react to the flow of the line and cover the gaps effectively.

If you're a defense, your ideal situations is to replicate with what happened with James Brown on the first play in the second quarter.

Green Bay lines up in their 2-4-5, which is their default nickel formation, with Jerron McMillian pressing in the center of the line with a single high safety to counter the Bears 2x1, 3WR,1TE, 1RB personnel. Jeffery is lined up on the single side, with Hester and Marshall the 2 receivers on the right side of the formation. 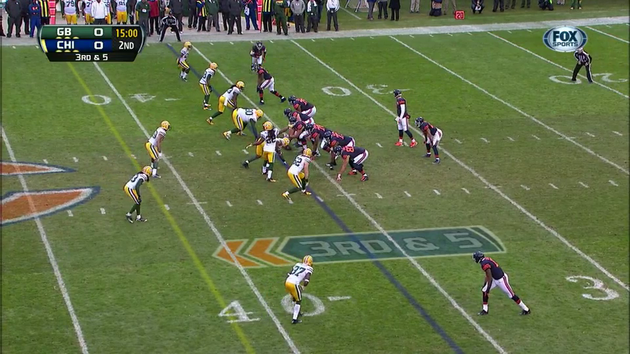 What the defense is going to do is move Mike Neal outside, he's going to move from his DT position, and push out, and engage Webb. And just look at how open the center of the formation is. Clay Matthews is outside of Kellen Davis, and loops around inside behind Mike Neal. 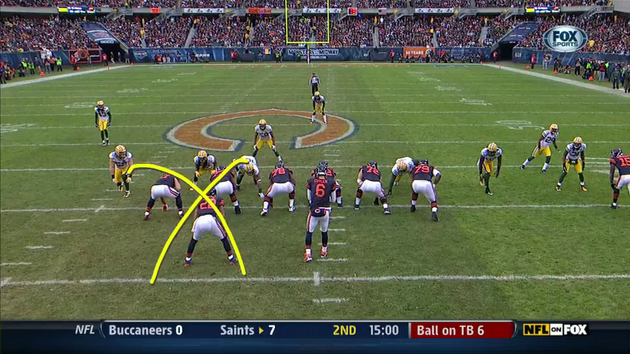 Webb sits and waits for Matthews, who has a bit of space to rush the passer, while we see Mike Neal starting to turn James Brown. 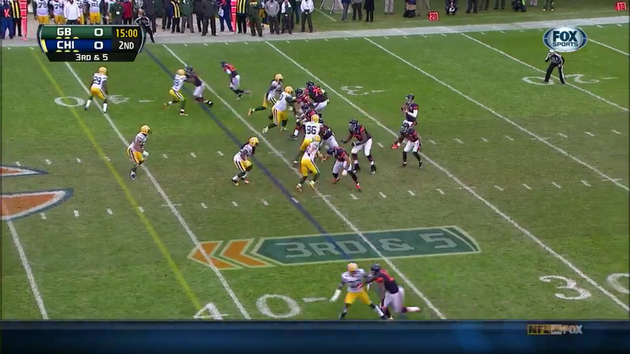 Kellen Davis goes out, and Forte hesitates to look like he's going to chip if available as he rolls into the flat, and the Bears are running 5 man routes. 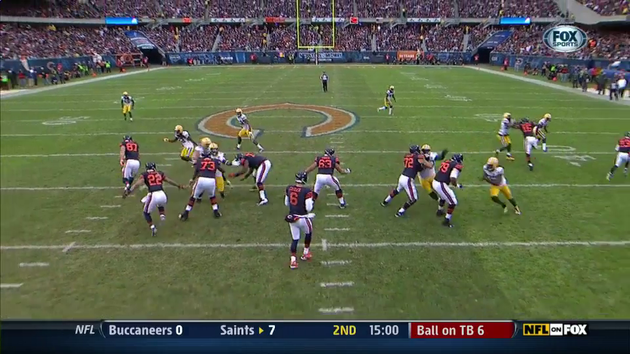 And this is where it starts getting awful. Webb picks up the passed Neal, but doesn't get enough of his body on him, doesn't step up into his responsibility and try to push Neal outside with his direction of travel. James Brown on the other hand? Ole. Ole. Ole. 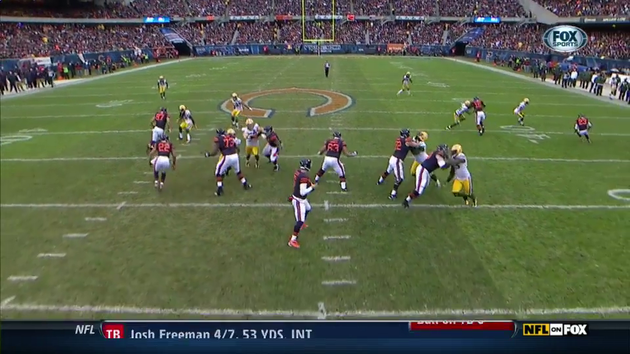 Do you see that free space that one of the most dangerous pass rushers in the game has to penetrate? That's what stunts do. They exploit lines that aren't coordinated. If Brown had his feet under him here, he might have been a little better off, he might have been able to push Matthews into Mike Neal and forced him to go around. 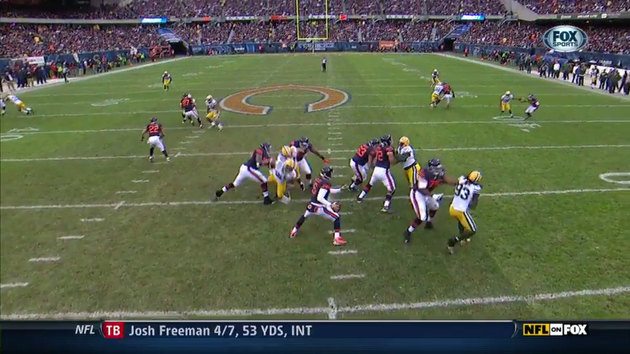 And he, correctly recovers, sort of. Mike Neal ends up on the ground, and Matthews stumbles over Neil to pull down Cutler for the first sack of Cutler in the game.

But in this little microcosm here, this view, this was the coverage that has plagued Jay Cutler. Marshall on the right has 2 men bracketing him, tough, tight coverage on the outside receivers, and a decoy in Kellen Davis, because we know he isn't a real threat. Forte has a little bit of space, but a man with his eyes on Jay Cutler if he decides to throw that way.

It's not a bad play call, no, but when 2 of your 5 receivers out on route are basically hosed, it's a really tough spot unless you can let the play develop and the line has to stay intact.

But we see what happened.

It was a bad effort by Brown. Horrible even. But somehow people feel that, Mike Tice, who's working on the most bare bones of offensive line talent right now, with injuries plaguing 3/5ths of the line, is doing a piss poor job running the offense because James Brown committed a colossal failure in not even getting a hand on Clay Matthews to protect Cutler. Because a UDFA who came out of Troy as a raw, long OT prospect, is not only starting, playing guard. Four guys got injured, and somehow this failure is indicative of how bad the line is and how bad of a coach Mike Tice?

Yes, it's poor execution by James Brown, an awful mental mistake that caused an already banged up Cutler to look like he was getting up a little slow. But, these are mental mistakes, something that most first year players make. Something that Mike Tice looked at, and held James Brown accountable (since we're on an 'accountability streak') and benched him.

People like Marc Silverman of Waddle and Silvy (ESPN 1000) say, it's a travesty, it's unthinkable, it's a reflection on the coaching staff and the player on doing something so brainless as what Brown did.

I say, it's part of the process, it's part of playing rookies, playing injured, depleated rosters. Gabe Carimi is injured, is playing with a bad knee, and still needs some time to develop into a regular starting RT. Jonathan Scott is a veteran, but is playing with a hamstring injury, and Gabe Carimi had to replace him at RT for stretches. Lance Louis is out. Chris Spencer is injured. Roberto Garza is healthy. James Brown is a UDFA who's had minimal time to prepare, Edwin Williams is nothing more than a backup LG who's good okay at best in pass protection, and came in when James Brown was benched. J'Marcus Webb is J'Marcus Webb. There were 5 different people inserted into the line throughout the game. It's a valid concern, but, with the injuries and lack of production. I think Tice was right to hold his players accountable, recognize the injury weaknesses, and try to find something that works.

I think it's an easy choice, even if it's not profitable in the long term.

The simple fact is, the Bears gave up 4 sacks, and it probably could have been a lot more. But, the Bears were smart on the line, smart in calling plays that kept Cutler safe enough. Yes, he was getting hit, yes he was probably holding onto the ball a little long, but, he did not take the same beating he took in Week 2. Maybe emotionally, maybe mentally, but physically? Not close to the beating Cutler's had in other games this year.

The line, cobbled, still managed to do a decent job the past few games in keeping Cutler upright. Yes, there's still loads of problems in how many times a TE is kept in, still plenty of problems with receivers catching balls, and Matt Forte hitting holes with any sort of effectiveness, but, looking at this line, and how, with shoestring, a bit of gum, and a rusty hanger, they sort of resemble an offensive line that's still a little better than Green Bay or Arizona. Not like that's something that I feel Mike Tice, Lovie Smith, or Phil Emery are content with resting their laurels on, but something that, when healthy, can be less of a liability in the future