Unable to get off the bus running, the Bears finally found a stride in the fourth quarter, only to see familiar demons come back to haunt them. Yes, the defense failed miserably, but the offense did not do them any favors.

That was the Bears rushing attack in the first quarter. And that, quite honestly, is pathetic. Jay Cutler had more than that on one scramble in the quarter. Marshawn Lynch more than doubled that ON HIS FIRST ATTEMPT.

And it kept up for a while. Let's take a look at the overall attempts chart for the Bears yesterday. 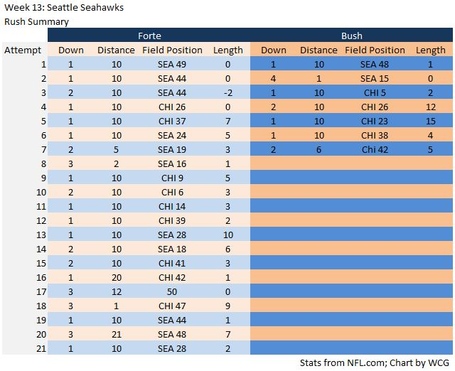 I know, it is pretty sad looking, isn't it? I've discussed Forte's issues recently, so I won't go into that too much. However, the running game looked bad for most of the first part of the game, particularly on 1st down.

Of fifteen first down rushing attempts by the running backs, 10 resulted in a gain of two or fewer yards. That's not so great. That's not a mirage--after his first four attempts, the starting running back had -2 yards. These were the results of running into the back of blockers, not keeping feet moving, and just general badness.

But they they started to figure it out. Particularly on the 4th quarter drive that failed so, so miserably. Here's the play-by-play of the ill-fated drive in question.

Nursing a 4 point lead not quite midway through the fourth quarter, the Bears offense goes into clock-grinding, run-heavy mode. Here's the kicker--it is ABSOLUTELY working.

The Bears are giving creative enough looks, and getting enough push. On 3 back to back runs, the Bears kill two minutes of clock, and Bush moves the ball 24 yards, bringing the offense near mid-field. With the Seahawks reeling from what is a suddenly potent, punishing run attack, the Bears go to their favorite play in the arsenal-the momentum killing timeout.

But shockingly, no ill effects. The team doesn't over think it, they come out of the timeout, stack big, and Forte pushes into Seattle territory. They burn another forty seconds or so off the clock. Things are coming up roses for the Bears offense, and it's starting to look like a team that's about to go down and ice the hopes of an up-and-coming Seahawks team. The Bears aren't too far from field goal range, they dictate the tempo, hell, they might even get to the endzone and make it a two score game.

On first and ten, Forte only gets a yard, but that's ok, because you expect Seattle to stack bigger against the run. And then, just when you think to yourself, "Hey, this offensive line is doing alright. I haven't even heard J'Marcus Webb's name today," it slaps you right in the face.

Son of a...well fine. Things happen. It's now going to be 2-14, and it's exactly the kind of time Jay looks for Marshall and just zips him a 14 yard. The Bears are still in it.

Then this play happens:

You'll notice that's a link, because if you're a masochist, you can hit the link and watch the botchiest botch of all botches again.

Now, I can never purport to know exactly what the play call was supposed to be. It looked like it was supposed to be a FB fake with a HB counter to the right side. If it was, IT WOULD HAVE WORKED SO HARD. The Seahawks crash down on E.Rod's direction immediately, the guards get outside and seal that edge, and it could have been the play that shot the Seahawks out of the sky.

However, Rodriguez's elbow knocks the ball out of Jay's hand, and he does everything he can to make sure it's not a midfield turnover. This sets the Bears up in 3rd and forever, Seattle smells blood in the water, and calls a timeout to preserve clock.

The Bears settle to keep it safe and run a little more time, get a few yards, and punt. Then the defensive collapse begins for the Seahawks 97-yard go-ahead drive.

The Seahawks do some great playing and clock management of their own, and the Bears overcome the odds to tie the game. Until the defense fails again in overtime.

The problem with all of that is that it was so tantalizingly close to not happening. Offensive execution early in the game would change the situation with regards to points and complexion, obviously. Missing the 4th and <1, and the dropped long pass to Bennett.

The true turning point can truly be pointed to in the middle of the above drive, though. Those are the things good offenses won't do. The Bears will get to that level. But it needs to happen sooner or later for the chance to make a playoff appearance more meaningful than perfunctory.