The read option is often called a "college offense," but it made the Bears defense look like a Pop Warner team. Here's how the Seahawks read their way to a win.

Share All sharing options for: Bears Playbook - (Not) Defending the Read Option

The read option has long been a staple offensive play in lower levels of football, but with the rise of a new generation of true dual-threat quarterbacks, it has experienced a renaissance at the NFL level. The Bears were first-hand witnesses to the 49ers' version of the read option two weeks ago, and found themselves getting gashed time and again by Russell Wilson's equally effective option plays this Sunday. Let's look at two plays that demonstrate how the read option works, and look ahead to some ways the Bears can adjust to this play in the future.

The Bears had held the Seahawks in check for much of the game, but Brian Urlacher and company were knocked onto their heels during the Seahawks final two drives by the option play. The option is such a successful play because it is fundamentally smart football. The "read" of the read option is made by the QB on one of the defensive ends. If the defensive end crashes around the tackle to stop the quarterback from running, the QB hands the ball off to the running back, who heads downfield between the tackles. If the defensive end pushes towards the middle of the line to defend against this inside run, however, the QB runs the ball around the edge the DE could have guarded. The offense also gets an extra blocker no matter where the ball goes: the DE is read out of the play and does not need to be accounted for by the offensive line.

Here's one example of the option play at work in the fourth quarter: 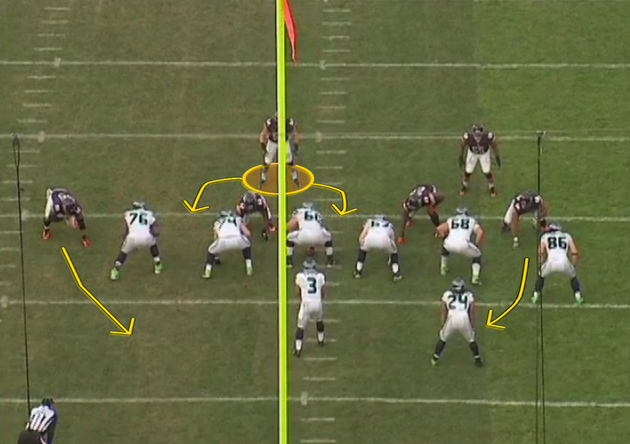 The yellow lines here do not indicate what the Bears actually did, but rather what they should have done. The classic response to the option is to have both defensive ends contain the QB within the pocket, forcing the run to the inside. It is then up to the linebackers, such as Brian Urlacher (highlighted), to identify where this inside run is going, avoid the block, and make the tackle. The Bears' defensive line, however, ended up playing this one as if it was a "standard" pro-style run play. 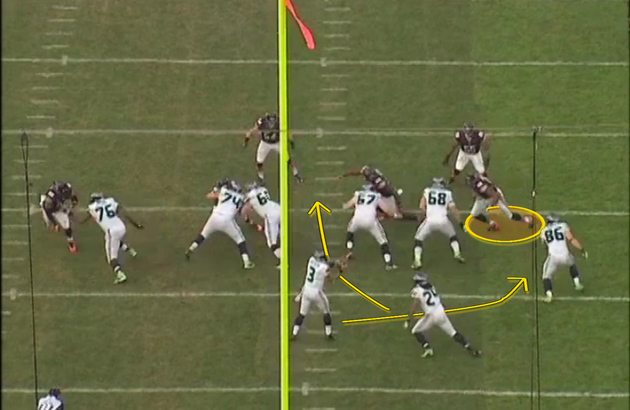 Here we are a moment after the snap. Israel Idonije, highlighted above, is Wilson's read player, and the yellow lines show the two run routes available to Wilson and Marshawn Lynch. Notice that the tackle across from Izzy is the one linesman who is not engaged with his man: #68 knows that Idonije won't be in position to break up the play, and the linesman keeps himself unengaged so he can get after a linebacker as the play develops. Wilson sees Idonije's inside move, and makes an outside move in response - this one is a QB keeper. With his tight end (#86) able to seal Idonije in and his right tackle free to engage the linebacker, Wilson is able to cruise over to the edge and pick up an easy first down. Idonije would have been better off attacking the edge and forcing the play inside, as the two defensive tackles have occupied the three offensive linesmen, leaving Brian Urlacher free to make the tackle if the play came his way.

The Bears defensive ends seemed to catch on to the idea that they needed to contain Wilson in the pocket by the time the game was in overtime. The Seahawks, however, were ready for this obvious adjustment. Remember, the read option allows an offensive to redeploy whichever blocker was supposed to take on the player being read. In this overtime play, Seattle used this extra blocker to blow a giant hole in the heart of the Bears D. 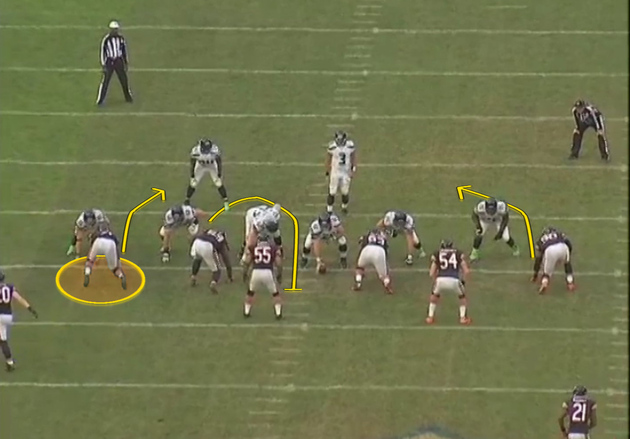 This time around, the yellow lines show what the Bears defensive ends actually did: pinching the QB into the pocket. Idonije, however, had the privilege of being wrong again when Wilson read him coming his way. Wilson handed the ball off to Marshawn Lynch, who could have driven a truck through the hole blasted open between the center and right guard. Witness: 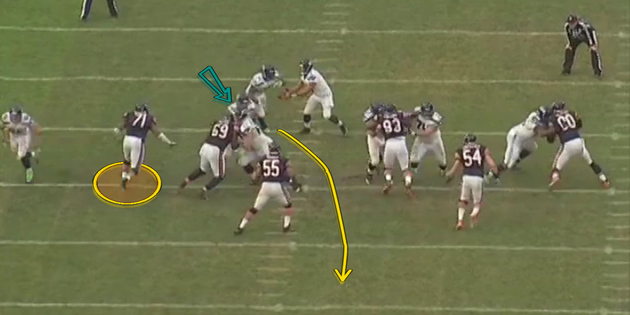 As Bears fans have been forced to find out this season, the read option can be a highly effective set of plays in the NFL. Still, there's a reason you don't see all 32 NFL teams running it: the option can be contained with sound defense and destroyed by freak athletes. There is, after all, a reason that Julius Peppers was not the read defender in either of these two plays. While beasts like Peppers are as rare as gold at the college level, there are enough players in the NFL with his combination of size and speed to make it tough on an option team. Leave Peppers unblocked, and he'll have the speed to get into the backfield and the wingspan to tackle either player once the handoff is made. Idonije is no slouch himself, however. Here's the very next play from overtime:

Idonije (highlighted) was once again the read player, but he played this one with speed and smarts, quickly taking charge of his edge to force the play towards a blitzing Kelvin Hayden off the other edge. The defensive ends are only part of stopping the read, however: the linebackers and safeties have to do their part as well. It is up to the linebackers to fill whatever inside gaps the offensive line creates, and the safeties have to follow suit and help clean up the play. On this one, both Urlacher and Briggs were happy to finish off Marshawn Lynch after Henry Melton and Stephen Paea held him up at the line of scrimmage.

It is plays like that this last one that give me hope that the Bears will have some options of their own on defense to counter the read option. It might be a rough road to the playoffs without Brian Urlacher at the helm, but at least #54 will have plenty of time to dust off his college playbooks and remember how to turn an opposing QB's options into taking a sack or having his running back squashed in the backfield.