Share All sharing options for: The Superfans present: NFL.com readers are stupid

We would like to thank Windy City Gridiron Site manager Dane Noble for allowing us to have front page permissions so we no longer have to be at the whim of the posting schedule of Lester Wiltfong, Jr.

If you are reading this, then it is most likely that you are not stupid, as you are able to read. But if you are one of the readers of NFL.com that voted in their "Greatest Team Of All Time" Tournament, and you elected to vote for the 1976 Oakland Raiders over a certain Mike Ditka led defensively-dominating, offensively smash-mouthing, special teamsly Butt-Heading team that plays in the Greatest City in the world, a certain team that captured the imagination on an entire nation, the actual Greatest Team Of All Time, the one and only 1985 Chicago Bears, affectionately otherwise know as Da Bears, then my misguided friend, you are in fact stupid. 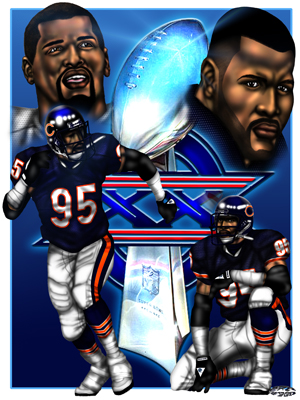 We would like to offer our condolences for the obvious ignorance of those that went with the Silver and Black over the Navy and Orange. Maybe it's genetic and you had no choice. Maybe you've had a screw knocked loose or maybe you didn't understand the poll.

The poll, in and of itself, is quite erroneous. First off, the title of said poll should have been The Second-Greatest Team Of All Time Tournament. Because anyone that knows their way around a football, knows that the greatest team of all time played in Super Bowl XX. And we're sure as Hell not talking about the team on the losing end of the 46-10 final score.

We are of course talking about the team that had the Black And Bruise Brothers manning the trenches. The team with the Junkyard Dogs woofing it up and terrorizing offenses league wide. The team with Mad Mac, The Fridge, Speedy Willie, Samurai Mike, The Colonel (or the Sackman if you will), LA Mike, Mongo, Danimal, The Hit Man. The team with the Greatest Football Player ever to lace up a pair of cleats, Walter Payton, aka Sweetness. A moment of silence for good old number #34...

The author of "The Rise and Fall of the Greatest Football Team in History", one John "Moon" Mullin currently of Comcast Sports Net Chicago, was equally taken aback by the travesty. In his book, he had none other than the head coach of the 1976 Oakland Raiders, the Boomtastic John Madden, deliver the forward in his tome. And in his forward, Madden had some interesting things to say about not only da 1985 Bears, but his own 1976 Raiders, and those 4 time Super Bowl champion Pittsburgh Steelers. From Mr. Mullin:

John (Madden) first cleared up any thought that those 1970s Pittsburgh Steelers teams included the "greatest," recalling that he coached against those teams and the Bears were better.

Then John told me "[the ’85 Bears] reminded me a lot of some of the Raiders teams we had. But we never had that dominant defense."

When that appraisal comes from the head coach of those ’76 Oakland Raiders, somebody needs to think about a re-vote.

We agree kind sir, and we also have to come clean...

For we may be just as guilty as those that voted the wrong way in the poll. For you see, we didn't partake in the tried and true Chicago tradition of vote early and vote often. Each of us Superfans cast one single solitary vote.

After ceasing our laughter at the absurdity of the poll in the first place, we each gathered around the Swirski family laptop, whilst we consumed copious amounts of Beer, sausage, and the like. We each cast our vote. One lonely vote for the each of us. Oh sure, we considered stuffing the ballot box like Todd stuffed his mouth with his own personal invention, Da Poltalianwurst. Which is a Bratwurst stuffed inside of an Italian sausage, stuffed inside of a Polish sausage. But that is neither here nor there... as we feel we let down Da Chicago Bears nation.

We want to issue a formal apology to all those that were hurt in the voting of the 1976 Raiders over the 85 Bears. We pledge to never allow such a miscarriage of football justice to cast a shadow over our beloved city ever again. We feel your pain Bears fans, and we will make amends.

P.S. We have included a much more appropriate poll for your voting pleasure.