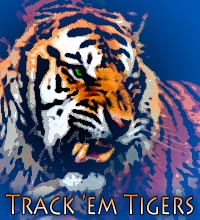 The Chicago Bears didn't draft one single offensive lineman in the 2012 NFL Draft. This fact has some fans calling foul on Bears GM Phil Emery. You may be among those wondering, how can a team with so many question marks on the o-line ignore the position?

But they did pick up a veteran free agent guard about a week ago, and a couple rookie free agent linemen immediately after the draft, including former Auburn Tiger offensive tackle A.J. Greene. Maybe not the rookie prospect many of you were hoping for, but at least they are adding some competition. After the jump some more info on Greene.

Just like we did last year, we'll be talking to some college websites of the Bears rookie additions to get their take on Chicago's new players as they move into the professional ranks. Acid Reign of the Auburn Tigers SBNation site, Track 'Em Tigers was nice enough to pass on some thoughts on the Bears latest tackle prospect. Here's his initial reaction to the Bears signing of Green;

Frankly, I'm shocked that A.J. Greene got invited to any NFL camp. He's battled injury his whole career and even in his senior year was in way over his head against SEC defensive linemen.

Not a ringing endorsement. I wonder if he'd be a solid prospect if he were healthy?

However, I have always wondered what he might do when he was healthy. Maybe he is now.

It seems all we have is "wonder" at this point Bears fans... Here's his quick synopsis of Greene's Auburn career;

2007: Redshirted at defensive end.
2008: Reserve DE, various injuries prevented him from cracking the playing rotation.
2009: Moved to offensive tackle, buried on the depth chart.
2010: Made a move during spring and fall camps, and wound up as the starting right tackle. Had huge problems in game 2 and 3 trying to block players like Pernell McPhee of Mississippi State and Dequan Bowers of Clemson. Broke his ankle against Clemson and was lost for the season.
2011: Was limited in pre-season camps due to the ankle, but seemed to be Auburn's most fundamentally sound lineman on a young unit. Started every game at left tackle, but hobbled all year and moved with a noticeable limp. Was a liability against the SEC's better defensive ends.

Now you may read that and come away thinking, 'injury prone camp body', but I came away with, 'fundamentally sound tackle prospect'. Then again, maybe I'm just in a good mood because I just had an amazing lunch.

CBSSports didn't have Greene listed as a potential prospect, and maybe that's because;

Greene skipped the NFL combine and Auburn's NFL Pro Day this year, but seemed to have a change of heart a few weeks ago.

And what prompted the change of heart; Would you believe a sign from God?

OK Mr. Reign, anything else you'd like to chime in about the Bears and their new camp body tackle prospect;

I don't really know what the Bears' situation is on the offensive line is, but I'd be worried if he's anywhere near the starting lineup this year. Might be one of those practice squad players who gradually improves. I think it's more likely he gets a visit from the Turk.

We all know about the Bears offensive line situation, so we realize that even the fringiest of fringe players could have a legitimate shot at cracking the Bears 53 man roster.

Thanks again to Acid Reign of Track 'Em Tigers for his insight.

Editor Note: Yes we realize that there wasn't 5 questions in this particular post, but all future Q and As we have scheduled in regards to the Bears rookies will be in the Five Questions With... section.