I really hope you're not late to Windy City Gridiron's Five Questions With... series. We've had Q&As published all week about some of the Bears rookies, and to borrow a sports metaphor, we plan to finish strong. Today we're talking with Drew Champlin about Chicago Bears undrafted free agent offensive lineman James Brown. Champlin is the beat writer that covers Troy athletics for the Dothan Eagle, which is a daily newspaper that serves Dothan, Alabama and it's surrounding communities, and he also maintains the Dothan Eagle Troy Blog. 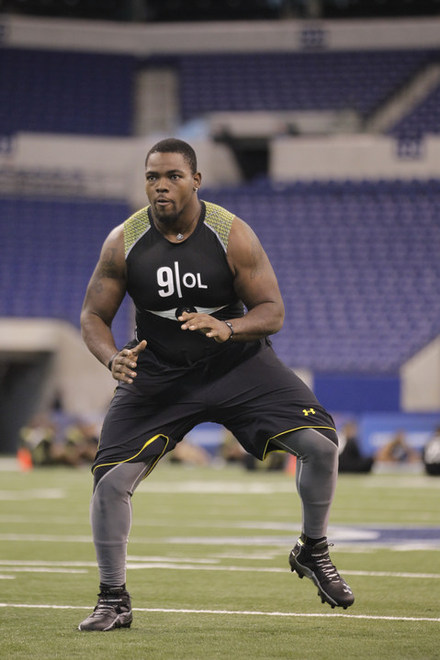 Windy City Gridiron - The big question that most Bears fans have is why did a kid that most experts predicted to be a 3rd round pick fall all the way out of the draft?

Drew Champlin - I guess he could be considered a "tweener," playing tackle at the college level and doing it very well, but being the size of an NFL guard. Maybe some red flags came up and teams were concerned on using an early round draft pick. Regardless of the reason, Brown has a chance to prove everyone wrong and still make a nice living for himself.

WCG - I read that Brown cut a lot of weight during his time at Troy, did he have any problems with fluctuating weight or staying in shape during his career?

Drew - He was about 350 as a sophomore, 335 as a junior, but he never looked fat and carried it well. He also never had to come out of a game because of fatigue. What dropping down to 310 did as a senior was help him elevate his play.

WCG - Bears fans enjoy the "get after it" mentality from their offensive linemen, what is Brown's temperament like on the field?

Drew - I'd say he gets after it, but I don't see him as a dirty player or one who does anything cheap. He's just a solid football player who graded out well during his career at Troy.

WCG - I know one of the concerns about Brown is playing at a smaller school, but during his time at Troy did he ever match up against any NFL caliber defenders and if so how did he fare?

Drew - The defenses he faced not from the Sun Belt, but in big conferences were Arkansas (2009, 11), Florida (2009), Oklahoma State (2010), South Carolina (2010) and Clemson (2011). I'd say the games where sacks came from the left side that I can remember were in Sun Belt games, so he certainly elevated his play when the big linemen came calling.

WCG - Do you think Brown is a guy that may benefit from some time on the practice squad or do you think he has the all around skill set to stick on the opening day roster? Keep in mind the Bears offensive line isn't their strongest position group...

Drew - He's got the all-around skill set to stick on an Opening Day lineup, especially if a team like the Bears isn't deep or proven there. I do believe he'll be a starter in the NFL at some point in his career, probably sooner than later.

Thanks to Drew for giving us his unique insight from working the Troy beat.

And if you missed any of our previous Q&As here they are;