Five Questions With "Building The Dam" about Brandon Hardin

Share All sharing options for: Five Questions With "Building The Dam" about Brandon Hardin

When the Bears drafted former Oregon State Beavers corner back Brandon Hardin in the 3rd round, there was a collective "who" from most Chicago Bears fans. Then it was brought to light that he missed the entire 2011 season because of injury and that they intend to move Hardin to safety. It didn't take long before grumbles of Jerry Angelo 2.0 started to creep up about current GM Phil Emery. But let's find out a little bit more about Hardin before we all delve into our inner meatball...

This is the second straight year the Bears dipped into the talent pool of Oregon State, and just like last year, we had a chance to talk to Andy Wooldridge who is the editor for the SBNation Oregon State Beavers website Building The Dam, and the editor of OregonPrepSports.net.

Windy City Gridiron - Many Bears fans are concerned with the injury history that comes with Hardin, were his injuries the nagging kind that would call into question his toughness or were they freak occurrences that limited his playing time?

Andy Wooldridge - Prior to the surgery for the shoulder injury, Hardin never missed a game, and that included special teams kick coverage even once he became a regular starter. And he was working back into condition towards the end of the season, before being cleared for contact. The injuries in his red-shirt freshman season were to one hand and the other wrist, and he played through them. So no, toughness was never in question.

The shoulder injury, which was a chipped bone that required a screw be inserted, was just a football collision thing. The nature of the surgery required the whole regular season to heal, but instead of writing off the year, the plan was for him to return for a bowl game, which, unfortunately, Oregon St. never reached. And he practiced for and played in the East-West Shrine game. 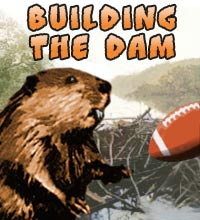 WCG - The Bears plan on having him play strong safety, which should help with covering the bigger breed of NFL TE. How was he in coverage when he played corner at Oregon State?

Andy - Usually isolated in 1 on 1 coverage against speedy wideouts. Hardin's overall effectiveness was sometimes criticized, but he was frequently put in very difficult positions, due to an overall defense that frequently offered no safety help, something not many corners can handle without getting burned occasionally. When not tasked with singly covering 1/3 of the secondary, he was actually pretty effective. And size was something he could handle.

WCG - Bears fans were witness to a little bit of the "no wrap" tackling technique last year, what kind of tackler is Hardin?

Andy - Hardin was a good tackler, with 47 solo tackles, plus 16 assists, as a corner. He's physically big enough to take down receivers in space. And because he was often isolated, he couldn't afford to risk the big hit approach, so he had to actually tackle.

WCG - I saw Hardin rated as high as being a 3rd round prospect and as low as being a 7th rounder. After watching him play through his college career, where you surprised with him going in the 3rd round?

Andy - I was surprised to see him go in the third round, because I thought missing his senior season would cost him, in terms of not having gotten a lot of attention, as well as not having that extra year of experience. It speaks to the recent trend of measurables meaning as much or more than recent production.

I had thought he would be about a 5th or 6th round pick after his junior year, who probably would have moved up a couple of rounds with a good senior season that he never got to have. His athleticism was never in question, but experience is a very valuable asset for any DB, and he was and is still learning and improving.

WCG - His measurables were outstanding, did his speed and athleticism in shorts translate to the football field?

Andy - Very much. It's what got him on the field both as a special teams gunner, and as a corner. It's also why he stayed on special teams, he was one of the fastest and best players on the team, and needed to be out there as much as possible.

I wrote earlier about him often being hung out in single coverage situations that were sometimes of questionable wisdom, and its because the opinion was that he could handle it better than anyone because of his tools.

We'd like to again thank Andy and Building The Dam for spending some time with us.