The Chicago Bears will run the "Stretch" play

Share All sharing options for: The Chicago Bears will run the "Stretch" play

In Matt Bowen's recent Tribune column he shared some of his notes from Bears mini-camp practice. Bowen talked about some personnel groupings, some formations he saw, and some plays that caught his eye. Something that caught my eye in his article was his mentioning that the Bears would be running the Stretch play this year. After the jump the passage I'm alluding to...

The Bears ran the ball from the shotgun alignment and used the "stretch" (one back run) in Ace personnel. Zone blocking up front in the "stretch" gives the running back the opportunity to press the edge of the defense or cut back.

The Ace formation is one of the top two positional groupings that he witnessed them running at practice. Ace is one running back with 2 wide outs and 2 tight ends. Often times one of the TEs is flexed off the line so he can motion around.

(Fellow WCG writer Steve Ronkowski did a fabulous job looking at some passing plays that could be run from the double TE set, and you can find that post right here.)

There are many variations of Zone blocking that is used when running the Stretch play, and the offensive linemen have various rules to follow depending on where the defender is lined up, but Zone blocking at it's most basic is simply all the o-linemen stepping the same direction. (I looked at the Zone scheme a little more in depth for WCG about a year ago, and you can find that post right here.) The o-linemen are all moving in unison and either double teaming or scraping off for a 2nd level defender depending on how the defense reacts. Zone blocking is a staple of Mike Shanahan offenses, and the Texans and Falcons use it as well to name a couple other teams.

The running back, as Bowen mentioned, is looking to either get outside or to cut back. Some schemes also give the back another option and that is to hit the first crease he sees. Some coaches teach, "Bang it, Bounce it, or Cut back" when teaching the runner how to read the play. Once he receives the hand off, if he has a lane he's to bang it up the hole. If it's not there he's to keep bouncing it outside and look to get around the edge. It everything looks congested play side, he's to cut back and run to daylight.

In this first diagram you see the Ace formation's standard double tight look, with two TEs (Y and F) and two WRs (X and Z).

The blockers all are stepping right when the ball is snapped and the QB is handing off to the tailback for him to run right. In the tailbacks pre-snap read he would have noticed the defense has 7 in the box with the safeties both back, this tells him that the "cut back" option for the play shouldn't be needed.

Depending on the scheme taught in this particular play the the back is either reading the right tackles block or the Ys block. If it's a true outside stretch call he'll read the end mans block, if the Y is able to reach around and seal, the back is sprinting outside, if the Strongside linebacker is able to set the edge, preventing the ball carrier to get around, the runner will bang it up and get what he can. 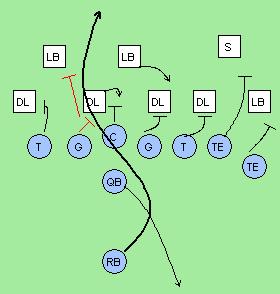 On this second play you you can see an example of the "cut back" option of the stretch play. The offense is still in an Ace formation, but this time the 2nd TE (the TE that is off the line of scrimmage) is aligned near the inline TE (the TE next to the RT). He could have lined up there, or motioned over to his position, but either way the offense is trying to outflank the defense.

The defense has 8 in the box with the safety up protecting against the strong formation the O is showing. The tailbacks pre-snap read should alert him that the defense is stacked against him running right and he should be prepared to cut back.

On the snap everything looks the same as the stretch play, the back starts off right, the blockers all step right, but in this instance the back read the defenses overload, 5 defenders vs. 4 blockers, and decided to cut it back. With a stretch play the backside blocks are just as important as the called playside blocks as they never know if a cut back will happen. The offense has a 3 on 3 on the back side and the runner should be able to find some daylight.

The Indianapolis Colts with Peyton Manning under center made a living with the stretch play. It's a good running play to do play action off of, and with a mobile QB like Jay Cutler it sets up some backside bootlegs. The stretch play is designed to get the defense flowing one way, then if they fast flow to the ball the cut back or the bootleg will hurt them.