Welcome back to the final installment of my look at the Denver Broncos offense that has made its way to Chicago. Today we're going to finish up the break-down of the Shanahan/Bates offense by looking at how the Broncos took advantage of their most deadly combination: the Cutler-to-Marshall pass. The short answer: play action, and lots of it. Head below the fold for the long answer, complete with even more Xs and Os.

In my brief look at how Mike Tice used his last #1 receiver, Randy Moss, we saw how Tice manipulated formations to get favorable looks for his receiver. The offense Bates called in Denver did many of the same things - moving Marshall across formations and otherwise attempting to get #19 into one-on-one coverage. The biggest trick that Bates relied on to generate major pass plays, however, is one we only see after the snap: play-action. Indeed, in one 2008 game against the Saints, Bates called no fewer than four run-fakes to draw in the linebackers and safties and allow Marshall to get open for big plays.

The game we have been looking at - the 2008 match-up between the Browns and Broncos - was not a great one for Marshall. He looked somewhat lost at times, breaking left when Cutler expected him to break right, cutting off routes too soon, and otherwise seeming out of sync with Jay on numerous occasions. The funny part is that despite this Marshall still ended up with 89 yards and a touchdown - not shabby for what appeared to be a mediocre outing.

Let's look at Marshall's first catch of the game, a 15-yarder from second and nine. As I mentioned previously, the Broncos loved to run their offense out of a two tight end set: it allowed them to run a full range of run and pass plays from the same formation. On first down, the Broncos ran behind the left guard for a mere one yard gain. Now, on second, Cutler lined up the team in the same exact formation. Here's what it looked like: 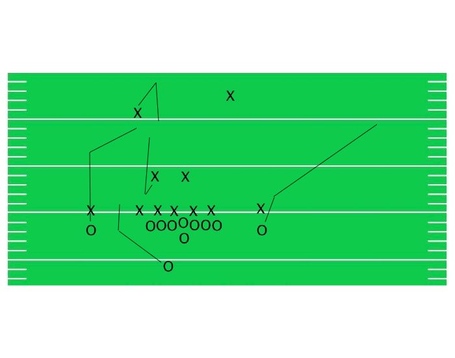 Brandon Marshall is the first "O" on the left here. The Browns are showing a linebacker blitz off of the left side of the line, and the linebacker does end up crashing the line. Both tight ends stay home to "run" block on what appears to be an almost identical play to the last: a run to the left side. With the blitz coming, the Browns make sure they won't get burned deep by playing a Cover 2 shell. The middle linebacker (first "X" on the left in the second row back) bites hard on the run-fake, however, leaving his middle zone completely unprotected. First, Marshall heads straight upfield to get clear of the cornerback's (the "X" across from him) zone. Marshall then reads the (lack of) coverage in the middle and runs a slant into this zone. By the time the linebacker realizes it's a pass, the ball is already on its way to Marshall for an easy reception. He's brought down quickly, but the play was more than good enough for a fresh set of downs.

This play is not particularly creative or innovative, but it is somewhat telling as to what Marshall can do to defenses. First of all, consider that the Browns are playing a deep zone coverage against what appeared to be a run play. With Marshall on the left of the formation and speedster Eddie Royal on the right side, the Browns had to respect the pass even on a run down. Instead of sending a safety closer to the line of scrimmage to better defend the run, both safeties backpedalled off the screen before the ball was even snapped: the Browns knew that no matter what, they couldn't leave Marshall in one-on-one coverage or risk giving up a big play. There are few cornerbacks in the league who can cover Marshall by themselves, so his mere presence on the field can force teams into a "softer" zone scheme.

Also, this play is a straightforward example of a key element to the Bates playbook - play-action. Bates clearly likes how run-fakes can open up soft spots in zones and keep the defensive secondary guessing. While Brandon Marshall is a "go up and get the ball" kind of receiver, Jay Cutler is very much a "see it, throw it" kind of quarterback: he waits to see a receiver come open before rifling the ball to him. When a play-call can create a moment of hesitation in a safety or linebacker through a run-fake, Marshall can get the separation he needs so that Jay can find him down the field. Without the run-fake, the linebacker would have been in position to defend or intercept the pass, and Cutler would have either had to have taken the ball himself or dump it off to the running back for a minimal gain. With the linebacker out of position, though, it's a pitch and catch first down. While Cutler to Marshall was a deadly combination, its success came not only through their athleticism but also through a bit of trickery.

Hope you all enjoyed my series on the Bates-Shanahan offense. If you're anything like me, you probably didn't get to see all that many AFC West match-ups in Chicago back in the day and could use a bit of a brush-up on what they were up to out there. I hope you learned a thing or two along the way and that you're ready to see this new-look offense in action. After all, the preseason is less than two months away...