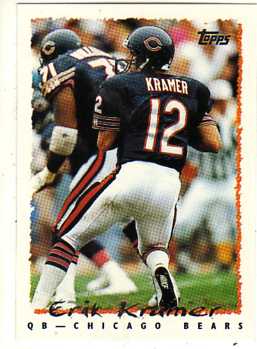 Here we are smack dab in the middle of the football doldrums. We're still more than a month away from the Bears opening up training camp and the only real newsworthy item still dangling over the Chicago Bears is the Matt Forte contract situation. And frankly, I'm tired of talking about that.

But the off season is a great time to take a look back and learn a bit about Bears history. So in a continuation of last year's series, I'll sporadically take a peek at some of the greatest individual seasons in Chicago Bears history.

This time out we'll look at a season many consider to be the greatest quarterbacking job ever in Chicago. Erik Kramer's 1995. And yes, he was leading a Ron Turner offense.

In 1995 the Bears went 9-7 finishing 3rd in the 5 team NFC Central. Kramer led the NFL's 9th ranked offense, in a year that saw the Bears historic bread and butter, the Defense, have an off year. The 1995 Bears D checked in at 19th. Had head coach and defensive mastermind Dave Wannstedt been able to get his D to play better the Bears could have had a playoff team.

The season started swimmingly for Kramer and the Bears. In a week 1 home opening beat down against the Vikings Kramer threw for 3 touchdowns and 262 yards. Receivers Curtis Conway and Jeff Graham both topped the 100 yard mark in the 31-14 Bears win. In week 2 the Packers and some guy named Brett Favre famously had a 99 yard completion to Robert Brooks. Even though Kramer struggled with his numbers, it's interesting to note that he threw a TD pass to defensive tackle Jim Flanigan, who used to play in the Bears short yardage packages.

The Bears would travel to New York and take out the struggling Giants in week 13 by a score of 27-24. Kramer was 25 of 38 for 268 and 2 more TDs. Noteworthy in this game was Bears wide receiver Michael Timpson rushing for a 6 yard TD and catching a 9 yard TD pass from Kramer. How often has a Bears WR scored both rushing and receiving in the same game? And how often has anyone mentioned Michael Timpson on Windy City Gridiron?

The Bears lost their next two with Kramer putting up pedestrian numbers, but they bounced back to claim victory in the final two weeks of the season. Kramer went 20-28, 256yds, 1 TD in a 31-10 win against the Buccaneers, in a game that saw Trent Dilfer throw 3 picks (HaHa). In the season finale Kramer had his longest run of the season, a big 11 yarder against the Eagles. He wasn't known for being very fleet of foot.

For his magical 1995 season Kramer completed 315 passes, 2nd best in the history of the franchise, attempted 522 throws, also 2nd best, for a 60.4% completion percentage, which is the 5th best percentage for quarterbacks that started at least 9 of the Bears games.