No, Seriously, The Bears Need to Score More Points

Share All sharing options for: No, Seriously, The Bears Need to Score More Points

Look, Jay Cutler gets it. The Bears need to score more points as a collective unit. End of discussion.

Well, not quite the end, per se. As Dave Gilbert wrote about yesterday, the NFL is continuing to grow into a league more based around a solid-to-dynamic passing game. It stands to reason that as plays become bigger and more dynamic, there should naturally be an increase in scoring. And oh there has been.

After the jump, let's take a look at how the Bears stack up in the points department with playoff teams since the divisional realignment. We'll take a look at some graphs, and see if there's anything we can extrapolate from these details.

Why not use total points? That's how the game is won. It doesn't matter what phases they come from, if a team scores more points, they'll win. Now, it's not a tell-all statistic. For example, in 2011 the Giants actually had a negative margin of victory. [That's (points score-points allowed)/games played] They won the Super Bowl, so anything's possible.

That said, points scored is usually an pretty good indication of offensive performance. What we've done here today is taken the six playoff teams each year, and calculated the average of their total points per . Then we've charted the Bears number that year in a simple line graph. 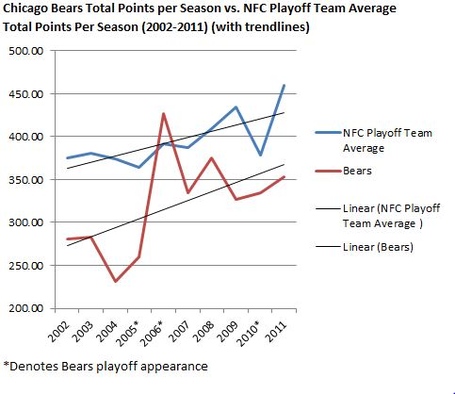 Oh, that's right, the Bears have spent a lot of time below that average. In fact, over the last 10 seasons, the Bears have only scored more points than the average of the playoff teams once. That was during the 2006 season, when the Bears ultimately lost to the Colts in the Super Bowl.

So let's look a bit closer. For starters, the Bears were really bad at scoring points early this century. Particularly bad when compared to the playoff teams that year. The Bears have narrowed the gap considerably under Lovie Smith's tenure, but there is still quite a bit of way to go.

But there's something else in there, and it shouldn't go unnoticed. Both lines are trending up. Playoff teams are scoring 30+ more points per season on average than they were just ten years ago. The Bears line is trending up at a slightly higher rate, but they're going to need to make a big jump to get themselves into the arena of the constant contenders.

"But Kev...we've got a dominant defense. What does it matter if you don't score as many points, if you're not allowing as many?" 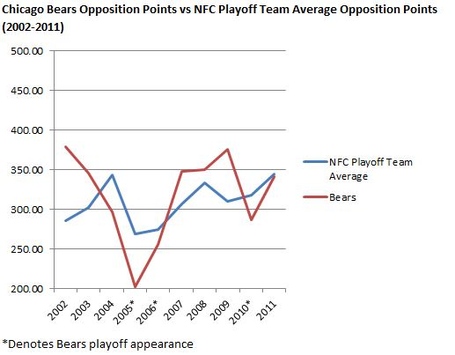 So, it's the same general idea. Both lines are trending upwards, but the Bears are a heck of a lot closer to the numbers that the playoff teams were putting up. (Helpful hint for you graph-haters: In this instance, we want the red line to be below the blue line.)

The thing that should stand out pretty quickly is that the Bears have been ALL OVER THE PLACE in the last 10 years. From 2005-2007 they went from giving up a ridiculously low 202 points to nearly 350. Since then, they've bounced around that NFC playoff average pretty consistently for the last five seasons.

As the graph shows, the Bears have, for the most part, played playoff-caliber defense, particularly during the tenure of Coach Smith. So then, why have they only been in the playoffs three seasons out of the last ten.

So do the Bears have enough to get it done this year? I think so. An ability to move the ball through the air should help shorten that gap considerably. Do you think these numbers really mean much? Discuss it below and sound off. Any other stats you'd like to see brought together? Let us know that, too.

***Stats pulled from pro-football-reference.com If you haven't been there, seriously, Do it. So much info.