Every offseason, many NFL players do their part in helping teams make employment decisions... Today, defensive tackle Nate Collins has likely ensured he will not be employed in Chicago for very much longer, having been suspended by the league for violating the Substance Abuse Policy.

[Update: If this suspension stemmed from his arrest in February for pot, then the team may have expected this.]

In addition to his one-game suspension, he's been fined an additional one-game paycheck. Details won't necessarily be made public, but our guess is that it relates to a February arrest for marijuana possession and tinted windows while still a member of the Jacksonville Jaguars.

He is not to be confused with the Nate Collins that works at Krogers in Flower Mound, TX.

In other news, former Bears WR Rashied Davis' dog broke its leg, and he tweeted a picture about it. We send our best to Rashied and his 'killer'.

#tbt my killer with a broken leg. It was pitiful to watch. 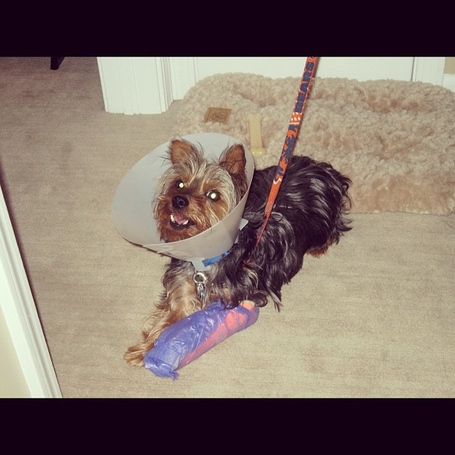