Alan B. Shepard and Shabbona Elementary Schools Have The Smartest Kids In The World

Share All sharing options for: Alan B. Shepard and Shabbona Elementary Schools Have The Smartest Kids In The World

Hello to all my fellow Chicago Bears Brothers and Sisters out there in Windy City Gridiron land. We know you're as excited as we are that Chicago's Journey To the Super Bowl has officially kicked off in Bourbonnais. We will of course be bringing you our Annual Prediction Special next week, where we give our take on the entire season, but we wanted to bring your attention to another group of prognosticators that may be just as good as us Superfans.

As reported by ESPN Chicago, the incredibly intelligent people over at Alan B. Shepard and Shabbona elementary schools have revealed their Super Bowl prediction for this upcoming season. And their pick; Our Beloved Bears 28 and the New England Patriots 17. While we agree with the outcome of said Super Bowl, we disagree on the final score. Each and every one of us believe that if the Patriots manage to make the big game, that the final score would be equal the greatest final score in the history of the NFL, 46-10 Bears. Bear down my friends. 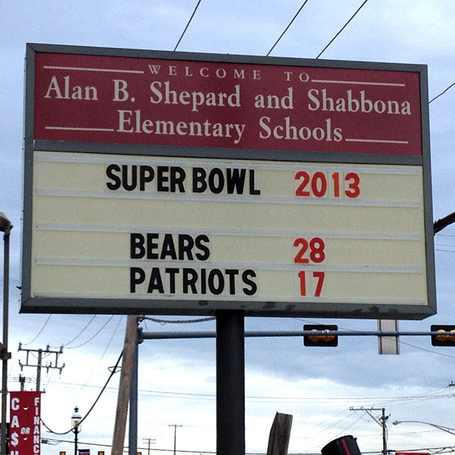