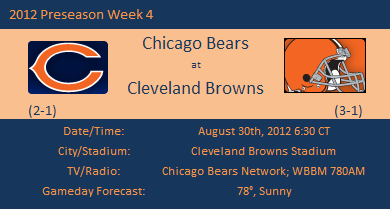 Ah. The 4th preseason game. That wonderful time where we watch the bottom half of the roster and 22 guys who won't have jobs tomorrow battle for spots that were determined 2 weeks ago.
This year it's the Browns. Oh, wait, that's every year, as the Bears don't want to travel too far and it's nice to see the Dawg Pound now and again. Note: I'm completely aware that there's a typo in the image that suggests the Browns have magically played one more preseason game, but the outcome of this game is so utterly forgettable that I'm not even going to be bothered to go update the graphic. Consider it the charm of the preseason.

Side note: Did you see that the Dolphins plane hit another plane? That's ri-damn-diculous.)