Inside the Playbook: The Shea McClellin Pass-Rush

Share All sharing options for: Inside the Playbook: The Shea McClellin Pass-Rush

For how bad the offense looked during last Thursday's game against the Packers, the defense played an impressive game. I was most impressed by the play of one guy who came into the season as a question mark: first-round pick Shea McClellin. There was a lot of grousing surrounding his selection by the Bears - He's too small! He's a 3-4 outside linebacker! - but he proved with his play against the Packers just how valuable he can be in this defense. He might not look like much on the sideline, but as Aaron Rodgers found out last Thursday, speed kills.

The number one reason you draft a guy like McClellin in the first round? He's fast, and he's able to leverage that speed to whip around blocks and get after the quarterback. We get a hint of his ability to do just that at 8:45 in the first quarter. The Bears had the Packers backed up to a 2nd and 16, and Rod Marinelli knew that it was time to dial up a good pass-rush. He put Shea in the best position to beat a block with pure speed: the "Wide 9" over the left tackle. 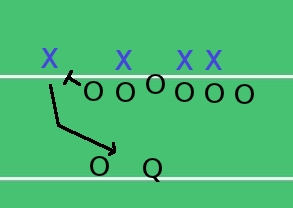 This outside positioning gives McClellin a perfect opportunity to use his speed to beat Packers LT Marshall Newhouse. With a free release into the offensive backfield, Shea is able to blow past the arm block of Newhouse. Corey Wooten is also able to break through the Packers line, and he arrives at just the right to to help McClellin finish off Rodgers for a ten yard loss.

McClellin only gets credit for half a sack on this one, but his play here is exactly what the Bears were hoping for when they drafted him. In passing situations, McClellin has enough acceleration to blow past blocks and get to the quarterback before the QB can scramble or get rid of the football.

Strangely enough, despite everyone's complaints that Shea's talents would be better used in a 3-4 than a 4-3, Tampa 2 defensive ends are often expected to have as much range as 3-4 OLBs. In Marinelli's defense, it is the job of every defensive player to rally to the ball, and with the linebackers often dropped into coverage, a quick defensive end can be a major asset. McClellin didn't make any major plays like this in the game, but during one play in the second quarter (13:45 or so), he nearly beat known speedster D.J. Moore to a gang-tackle of John Kuhn after a wheel route catch-and-run. McClellin, who had been motioning between gaps on the line in a two-point stance (Gasp!) before the snap, rallied from about ten yards deep in the backfield to five yards down the field to split the tackle with a few other Bears. I suspect his speed will prove as valuable as Julius Peppers' when it comes to pursuing plays. Neither can chase down a WR or RB at full speed, but if the offensive player gets slowed up or tries to make a move on the defender in front of him, both have the ability to be there in time to clean it up.

On his first full sack of his career, Shea proved he could catch up to at least one player on the move: Aaron Rodgers. It came in the fourth quarter, with only 4:27 left in the game. While the game was pretty much over at this point, there was still a slight glimmer of hope that Jay could somehow get it done on offense if only the defense could get him the ball back. With Rodgers facing third and ten and looking to ice the game with another set of downs, it was do-or-die here for the D. McClellin lined up on the right side this time, slightly outside of Packers RT Brian Bulaga. Rodgers gets the ball, but the pocket quickly collapsed around him on both ends - both Julius Peppers on the left and McClellin on the right were about ready to push the tackles opposite them right into Rodgers' lap. Rodgers takes off, but this little GIF tells the rest of the story:

While Rodgers might have gotten away from Henry Melton with an almost-respectable stiff-arm, McClellin's quick release from his blocker and his acceleration get the Bears exactly what they needed here - a punt and one last chance to make a game out of it.

Is McClellin the second coming of Julius Peppers? Probably not. Luckily for the Bears, however, they already have a Julius Peppers. McClellin doesn't need to be a beastly, take-on-two-blockers-and-win kind of defensive end, at least not yet. His job is to beat the single-man blocks he see because offenses are worried about Peppers, and for at least one game, it looks like he'll be able to fill that role quite nicely.