After drafting Shea McClellin, who projected to be a 3-4 outside linebacker, Lovie Smith and the Chicago Bears find unorthodox ways to use McClellin in Lovie's quest to confuse offenses.

There's one thing you can't accuse Lovie Smith of: not being creative in his defense. After the first few years of trying to explain that just because he runs the Tampa 2 doesn't mean that's all he runs, we've come to the point where everything he does seems to reflect the goal of confusing the heck out of the offense, though copious amounts of stunts, showing coverages that aren't actually called, and my personal favourite, pressing the A-Gap. With the addition of Shea McClellin, there was a lot of hubbub about how he was a 3-4 OLB not a 4-3 DE, and he's not being used effectively, blah, blah, blah, wasted pick, Emery is Angelo 2.0, terrible at talent evaluation, there's going to be a regime change because Emery is drafting 3-4 OLBs, and next year we're going to be a 3-4 team.

It's inconsequencial. This guy is a player, and Lovie is smart enough to utilize the Chicago Bears' first round draft pick in ways that improve the team and the defense.

The Boise Package is three down lineman, and one standing lineman.

No, no, no, Kay! You have it all wrong, it's three down lineman and a linebacker in a two point stance!

Maybe, but what's the difference. We have down linemen playing in coverage on zone blitzes (Idonije and Peppers are usually dropped into coverage), and 4-3 linebackers standing up and rushing the QB after mugging the A Gap. What the important thing to remember is: it's always about role and responsibility. Regardless of what it looks like McClellin is doing, where he's standing, how he's standing, he has a job in the scheme, and most of the time, it's about getting to the quarterback.

In the Packers game, 13:48 in the second quarter, 3rd and 7. Packers lined up 4 wide in shotgun, Nelson on Rodgers left at the line of scrimmage, Finley in the near slot, and Jenning and Jones to his right, Kuhn in the backfield. Bears counter with 3 down linemen, Ends on the 3 Technique, Peppers lined up at DT in the 1 technique, 1 standing lineman, and and their nickel formation, safeties 14 yards deep showing Cover 2. 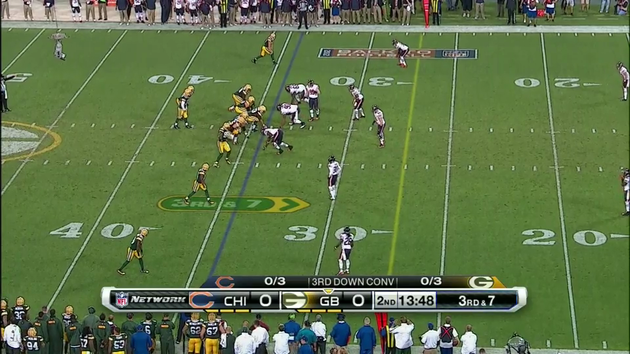 And there's Shea McClellin roaming the gaps, maybe not probing for weaknesses, but causing the offensive line to at least have to account for what may, may not be happening, where he'll strike like a cobra. Look at it as if it was a pre-snap stunt. They've done pre-snap stunts a few times thus far in the game, to mixed success, where Melton and Paea flipped sides as the protection shifte. The line already allowed 3 sacks thus far.

At the snap, McClellin's essentially even with the rest of the DL. The Center, LG, and LT, all move left, and pick up Peppers and the Henry Melton at RE. McClellin stands up, lets the pile move to his right and accelerates through the hole like a patient RB causing the interior of the pocket to collapse, and spins off of the LG who comes up and gets a hand on McClellin. 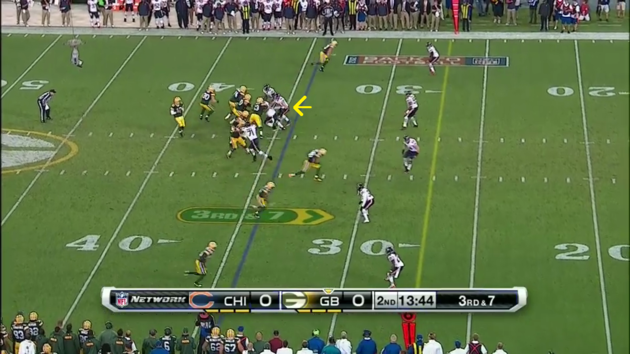 Rodgers sidesteps, steps up and throws a short dump to Kuhn who meets Briggs and Tillman 4 yards short of the first down. 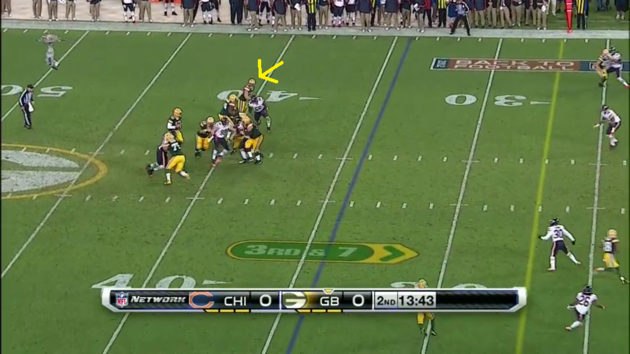 When you think of it, McClellin's standing up or in a three point doesn't really matter when you look at what Marinelli and Lovie are throwing at pass-blocking lines these days: Lots of interior pressure with Peppers, Paea, Okoye, and Melton all being very efficient against the inside of lines, hard and fast pressure outside with McClellin, Peppers, and Corey Wooton, stunts, a few blitzes. Anything to confuse the line in their responsibilities and allow for unfettered penetration into the backfield. And guess what: It's working. The Bears are at the top of the list in Defensive Sacks this year through Week 3.

So, to break a common myth: you don't need to play a 3-4 zone blitz to confuse the line, you just need to throw your pieces in an order that the offensive line doesn't always understand. Seeing things it's not used to seeing in an order that you don't always expect. Confusion is a strong weapon that's equally as dispensable from a 4-3 front as it is a 3-4 front. One of the really pertinent points that Dick Stocton and John Lynch brought up was the fact that the Bears defense doesn't have to blitz to pressure the quarterback, and that allows them to blitz when they want to, not when they have to. It was probably the most luminary point they made all night about how effective the defense has been at shortening the clock. The Tampa 2 works as a synchronous unit. If one part is working well, the other parts are better, and if the other parts are better, the other parts have less resistance. It's not a coincidence that the secondary is playing better, the linebackers look good, and the defensive line is really putting the clamps down on offensive lines.

The next time we saw the Boise package was the Rams game, 1:54 in the 2nd quarter. This time, the Rams are 5 wide, in the shotgun. Again McClellin is roaming the A and B gaps, and the Bears this time rush 3, drop 8 into coverage, including McClellin. 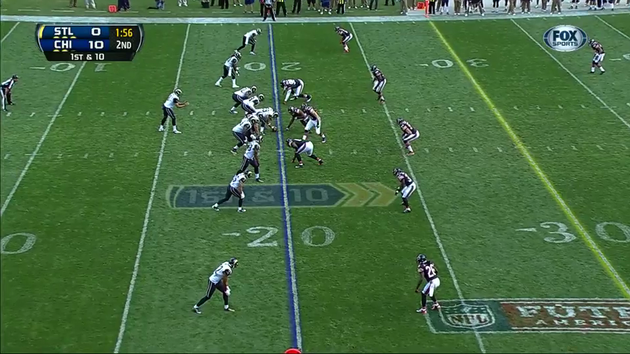 The Rams once again, dump it off to the left and Steven Jackson takes it for a few yards. 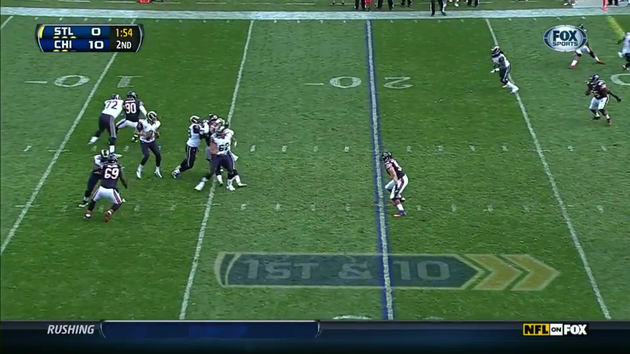 Once again, in the offense is in 4+ wide, and the Bears counter by playing to their defensive strength on the line, and DROPPING EIGHT on a first and ten. If you're a QB, and you have 5 men in against 3 pass rushers, but you have 5 men out on routes against 8. That's not a place you necessarily want to be in if the three against you are Melton, Peppers, and Idonije. McClellin was roaming the shallow center watch the crossing routes and accounted for Bradford if the line created a pocket for him to escape. And if Bradford tried to escape, there would have been Shea McClellin right there to accelerate into his scramble. Bradford didn't have an opportunity to throw anything downfield, and Jackson came back to the ball and picked up the dump for a few yards on first down.

The pattern with the Boise package seems to be less about down and distance, and more about the personnel it faces. The Boise Package has been is 3-1-3-5 with 5 defensive backs, and has thus far only been utilized against 4+ receivers from the shotgun. It's not used all the time, and McClellin hasn't been significantly more effective out of the Boise package than the regular 4 down linemen set, but it's presence is another wrench to monkey with opposing QB's heads.