Inside the Chicago Bears Playbook: The Quick Pass

Mike Tice hasn't turned Cutler-Marshall into Culpepper-Moss just yet, but settling for a bit less finally got the offense moving against the Rams.

Share All sharing options for: Inside the Chicago Bears Playbook: The Quick Pass

While Mike Tice has been trying to show off his fancy new weapons on offense, the Bears offense is no more ready to become the second coming of Culpepper-Moss as it was to be the Greatest Show on Turf Poorly Maintained Grass. The Bears - for the third season in a row - have once again started dialing it back in the passing game, forsaking the chance of a big gain for the chance that Jay Cutler can throw the ball before getting sacked. I did see echoes of an NFC North offense of old, but not one from the Vikings. On at least one drive, Tice channeled his inner Mike Holmgren and called short pass after short pass. Not only did this keep Cutler on his feet, it moved the ball and put points on the board.

The Bears D had stopped the Rams yet again as the third quarter wound down. But with the Rams wisely refusing to kick to Devin Hester, it was up to the offense to open up a real lead and give the team some breathing room. With the run game dead in its tracks and the deep ball failing to connect, there was really only one option left. Short passes - lots of short passes.

Jeff Fisher is no fool, however. He saw just how bad the Bears O looked against the blitz-happy Packers. On the Bears' first play of the drive, he guessed right that Cutler was thinking pass. He sent both of his cornerbacks after Jay on first down, figuring that the blitz could get home before the receivers completed their routes. But while Fisher guessed right that the Bears were going to pass, he was wrong about how little Cutler was willing to settle for. 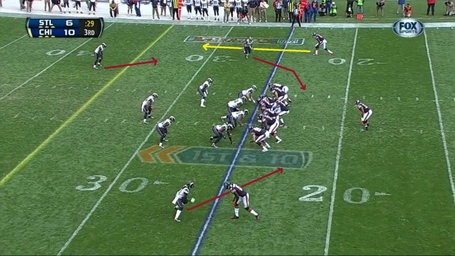 As soon as the ball was snapped, Cutler could see the right cornerback (top of your screen) following the invisible red line on his way into the backfield. Jay didn't have to think twice: he threw the ball right over the top of the blitz, finding Alshon Jeffery (also top of your screen) completely open seven yards downfield. The safety over the top of Jeffery wasn't able to rally to the ball until Alshon had continued upfield for another three yards. This is the essence of good play-calling and good quarterback recognition - Jay saw the blitz, knew he had his "hot" receiver open, and pulled the trigger. Quick pass, quick first down.

Mike Tice, seeing the success of this first quick pass, called in another one on the very next play. 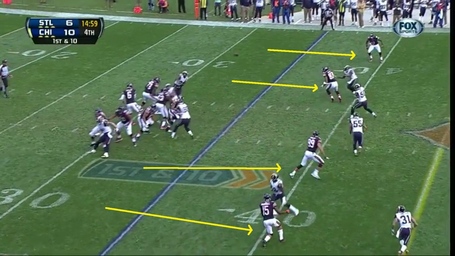 This play is straight out of the playground playbook - the always classic "everyone run up the field five yards and look for the ball." This picture, a bit more than a second after the snap, tells the whole story. The four Bears receivers all straight up the field to get to where they are here, but notice where all their heads are facing - right at Jay Cutler. These short, timed routes make Cutler's life easy. Even though the pocket is quickly collapsing around him, he knows he has four different ways to get the ball out quickly. Jay looks to his left. Kellen Davis (second receiver from the top) has drawn two linebackers in coverage, but Davis' loss is Alshon Jeffery's gain - he's completely open on the far sideline. Jay fires one his way, and Jeffery makes a one-handed circus catch. With cornerback Janoris Jenkins distracted by the ball bouncing around in Jeffery's hands, Jeffery was able to simultaneously secure the football and make a move on Jenkins. Two quick passes, twenty yards.

Even though these two passes had worked well, Tice didn't want to get too predictable. He called in a run on the next first down - a one-yarder up the middle by Kahlil Bell - and another quick timing route on second down went for an incompletion. Again, Fisher is no fool, and with the Bears facing third and ten, he's pretty confident that Cutler would be looking for his friend Brandon Marshall here. The Bears run a variation on the first play of the drive - instead of going five yards upfield, however, the play this time is "run straight to the stick and turn around." 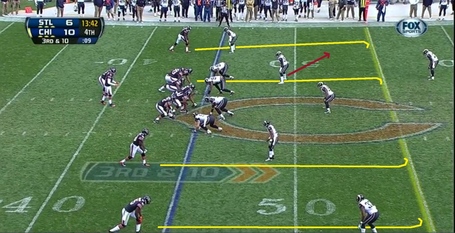 The four routes run by the Bears give a big clue as to who should be covering whom - each receiver is supposed to run right past his defender on his way to the first down marker. The linebacker that Kellen Davis (second route from the top) appears to have drawn in coverage, however, is thinking the same thing everybody else was - don't let Cutler get the ball to Marshall. After the snap, the linebacker moves up into Marshall's general vicinity along the red line, which does close off any realistic chance that Cutler could get him the ball - even Jay wouldn't try to fit the ball into a window that small. Kellen Davis, however, has come open thanks to the linebacker's move towards Marshall, and Jay hits Davis with a laser shot just as Davis crosses the first-down marker. While the safety over the top of the route is able to quickly tackle Davis, the damage had been done. Three quick passes, thirty two yards.

Of course, Tice couldn't resist getting cute after this. The drive was kept alive by a crazy Jay Cutler scramble to move the ball to the Rams 6, but the Bears decided they would rather try and throw Devin Hester a jump ball instead of simply powering forward until they reached pay dirt. Strange stuff indeed, but at least the Bears were able to move the ball into the red zone. Hopefully, we'll be seeing a lot more of these quick routes this week against Rob "you just know he's going to blitz you" Ryan's Cowboys D.