On first glance, the CFL is a strange place for NFL fans and observers. Look beyond the large fields and the extra man, however, and you can see the foundations of a winning NFL offense in Montreal's West Coast Offense. Meet Marc Trestman's CFL WCO.

It's been an exciting day for Bears fans with the announcement that Marc Trestman is now the team's head coach. Having been out of the NFL for a while, many fans were left to wonder what exactly Phil Emery saw in Trestman that made the coach worthy of leading the Bears.

One Canadian caller to Chicago's WSCR-AM had the closest thing to the inside scoop, however. He said that Trestman has been the CFL's answer to Bill Belichick, having made the Montreal Alouettes into a perennial Grey Cup contender through a furious scoring offense.

Sports opinions are a dime a dozen on either side of the border, but the tape doesn't lie. I dug up a bit of Alouettes footage from last season to see for myself how Trestman ran his offense up north. I wanted to give you a big-picture view of Trestman's offensive strategies, but I wasn't able to work past the very first drive I saw. Four plays, over seventy yards, and six points. Let's look at it to see what we can glean of Trestman's offensive approach.

As WCG's Kay Paradiso noted in her bio piece on Trestman, the man likes to run a wide-open, aggressive offense. He did exactly that in his opening drive of his 2012 Labour Day Weekend match-up against the CFL's number one defense, the British Columbia Lions. The first play was a West Coast standard, an out route coupled with a curl. Here's how Trestman drew it up: 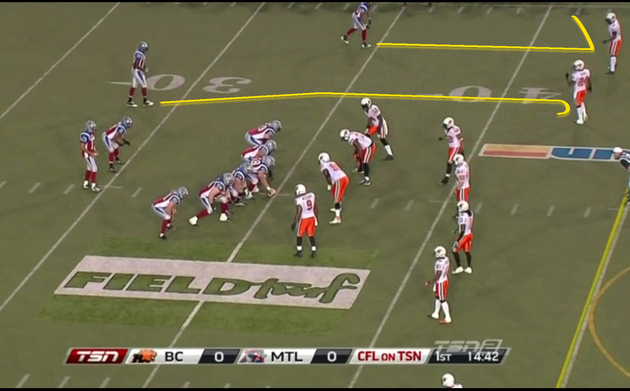 With both corners playing off of the Alouette receivers, one of these two routes is bound to get open for Montreal QB Anthony Calvillo. After a quick dropback, Calvillo was able to find his open man and quickly pull the trigger.

As you may or may not know, the CFL is a three-down league. In other words, up north it's a "two and out." As such, consider this second and six a "third down play" if it was run in the NFL.

Trestman called in another staple of modern WCOs, a "trips" formation to the right of the formation. The three WRs ran up to the line to arrive at a formation something like this: 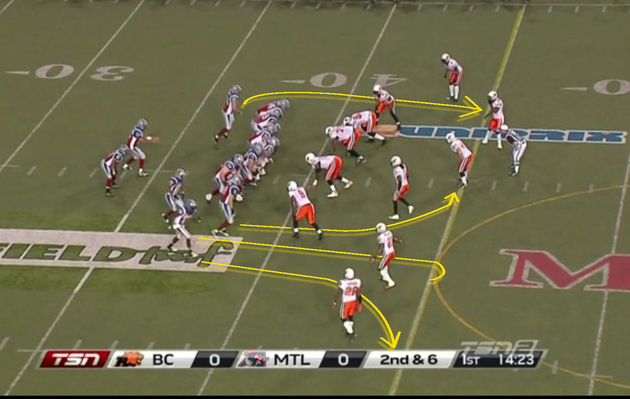 As you can imagine, the whole points of a trips formation like this is that each of the three receivers has a decent chance of drawing man coverage and an equally good chance of getting open after that. By having the routes all start as "go" routes - each of the three WRs runs straight down the field before breaking off or curling back - the defenders are forced to retreat at first. This gets the middle WR open for Calvillo. 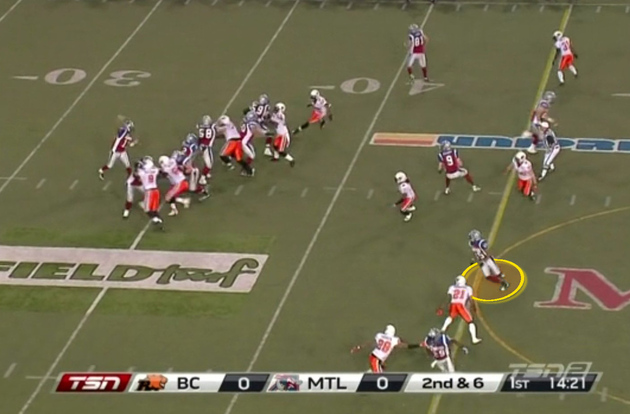 The catch is made a mere two seconds after the ball is snapped, and the Alouettes convert the second down.

For the next play, Trestman reaches into his bag of tricks for something special: a hitch screen. Here's how it was drawn up: 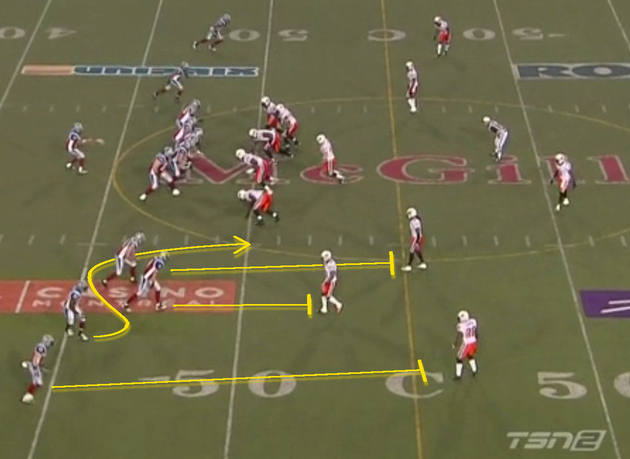 The BC Lions were a bit numerically challenged on their defensive alignment here, sending only three men to defend the four receivers on the right of the offensive formation. With some great blocking by both the offensive line and the receivers, the Lions would pay for that mistake. Witness what the play evolves into just after the ball is thrown. 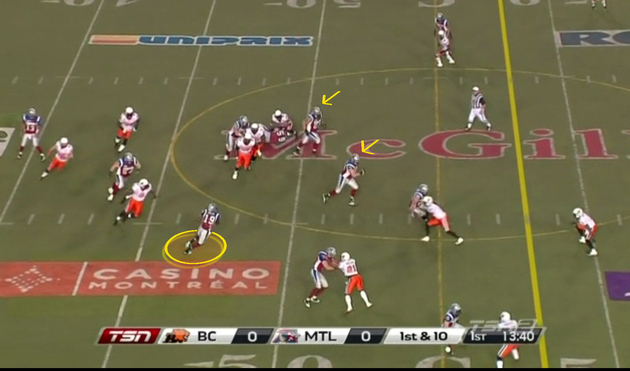 The three receivers have made their blocks and do a good job of keeping any of the defensive backs from making a play. What really caught my eye, however, is how Trestman has involved the offensive line on this outside screen. While most NFL coaches are content to simply get their receiver into the second level on screen plays like this, with two linesmen (pointed out in the above picture) in front of the receiver, Trestman is going to get a lot more than ten or so yards out of this one. BC is finally able to corral the receiver, but only after the Alouette WR has flown fifty yards down the field.

Now well within striking distance of the end zone, Trestman continues pressing forward with a final pass play. Once again, he has drawn it up so that multiple receivers are attacking a single area of the field, setting up the QB with a quick set of options to read and react to. 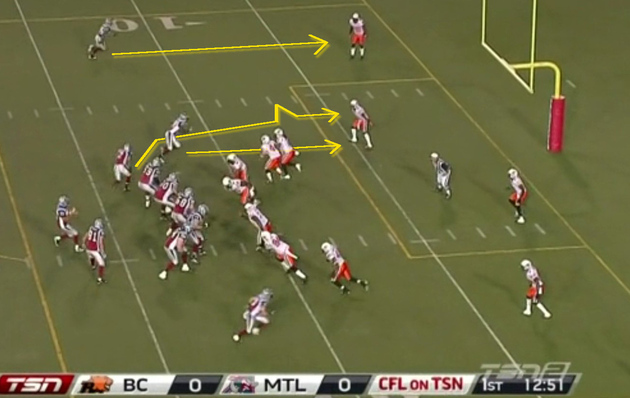 With three receivers to Calvillo's left, one is bound to get open. The WR to the far left runs a basic go route, and the tight end runs straight down the seam. These two routes are just there to set up for the middle receiver, however, who breaks into what appears to be an out route five yards down the field. With the defender now out of position, the receiver immediately cuts back to the quarterback with the ball already on its way. These kinds of quick timing routes are classics of the WCO. 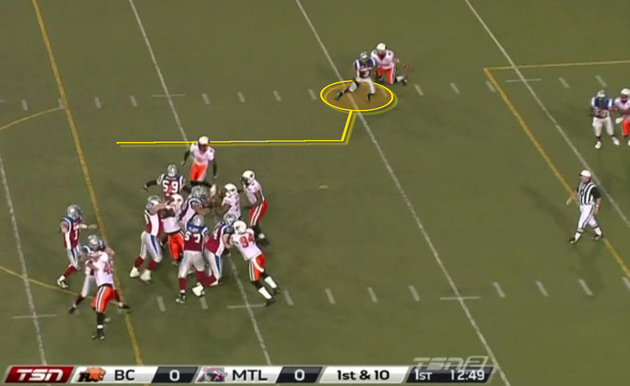 With the other two receivers now in good positions to block, Montreal is able to drive the ball into the end zone. Again, notice that the ball is out of Calvillo's hand only two seconds after the snap, allowing the play to get off despite BC sending a big-time blitz after Montreal.

While it is easy to doubt the talent of CFL players, Emery was wise to put his faith in their coach. The man is clearly the antidote the Bears' offensive ailments. Trestman runs an aggressive offense, but unlike the aggressive offense of Mike Martz, Trestman's is built on creating openings in defenses through route combinations and relies heavily on quick passes. While Trestman will have one less player to use as a decoy in the NFL, these same offensive principles he used to win two Grey Cups can bring trophies home to Chicago.