New Bears defensive coordinator Mel Tucker will be running a 4-3 in Chicago. Here's a look at how Tucker lined his players up against a familiar foe: the Green Bay Packers.

Marc Trestman didn't patronize Bears fans at his introductory press conference with promises to beat the Packers. Promise or no, the road to the NFC North crown still goes through Green Bay. We'll have to wait until the 2013 season starts to see how Trestman attacks the Green Bay defense, but through a stroke of scheduling luck, we don't have to guess at how new defensive coordinator would match up against the Packers.

During Week 8 of the 2012 season, Mike Mularkey led his Jaguars into Lambeau Field to take on the Green Bay Packers. While the Jacksonville offense put up an anemic fifteen points, Mel Tucker's Jaguar defense gave Aaron Rodgers and company a run for their money. Despite their well-deserved reputation for mediocrity, the Jaguar D held the Packers to only 24 points. Considering the Bears held Green Bay to only one point fewer than this when the two teams played in Lambeau, I would give Tucker's former squad due credit for their work.

At the line of scrimmage, Tucker's defense will continue in the Lovie Smith model of a four-man, one-gap front. Witness: 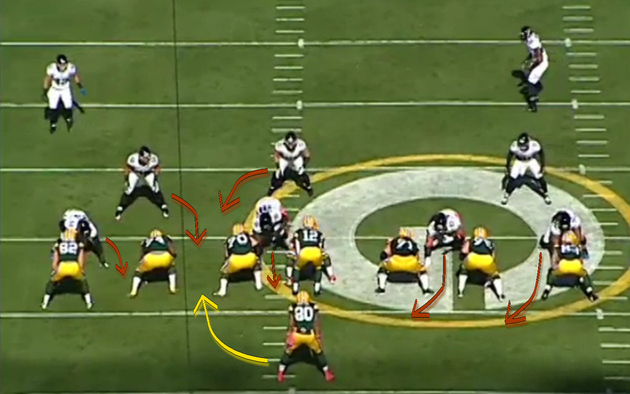 Yes, Virginia, it'll be a 4-3. This alignment is a vanilla single-gap 4-3 defense - the same thing the Bears have run for the last nine years. Hopefully Tucker can defend the run better when he gets to work with better players, because his line got zero push on this particular play.

This basic run defense was the right call against this play, but there was simply no execution. When every single defensive linesman gets pushed backwards, the running back could become a walking back and still get yards.

While Jacksonville proved vulnerable to the run, their D was more resilient against the pass. Indeed, Jacksonville had surprisingly good luck using an all-too-familiar defense. Consider this pre-snap defensive alignment on the Packers' second play: 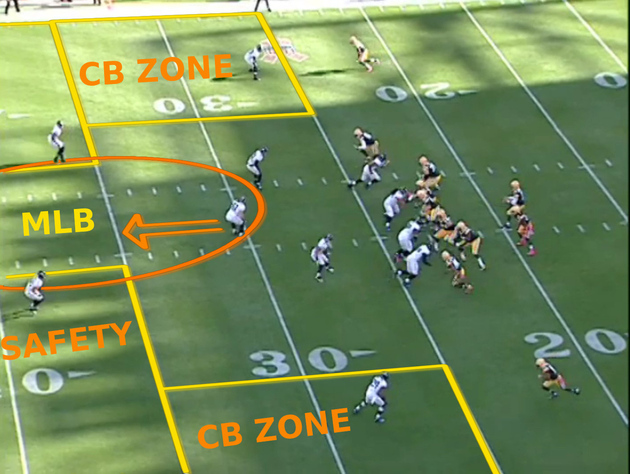 Mel Tucker won't have much of a problem teaching the Bears defense this play call - it is the same Tampa 2 shell that Lovie Smith used as the Bears' base defense. The cornerbacks cover the short zones on each sideline, each safety takes a deep third, and the middle linebacker drops back to play center field.

Aaron Rodgers doesn't need to double-check this defense, as he can easily read the Tampa 2 alignment before the snap. Here's his play call in response: 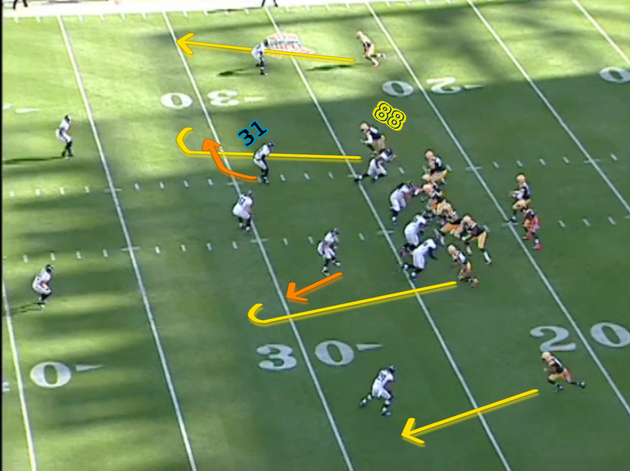 We've all seen plays like this one work wonders against the Bears' Tampa 2. In formations like this, Rodgers loves to exploit the match-up between his TE, Jermichael Finley (88), and the linebacker or nickel back across from him. Mel Tucker's no idiot, though: he knows the TE is a dangerous weapon against this Tampa 2. To counter the mismatch Finley often creates, Tucker moves his left cornerback - the 6'1" Aaron Ross (31) - to cover Finley.

Finley still has a size advantage over Ross, but Ross proved fast enough to make up for the size difference. Ross kept his eyes on Rodgers, broke on the ball at just the right time, and forced an incompletion. Here is the play right before the ball comes out: 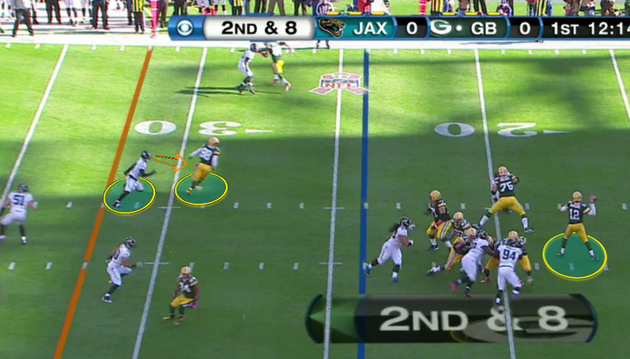 Rodgers thought he had an easy completion here, but Tucker had the right man in the right place. It's good to see that Tucker has a response to this TE seam pass better than vaguely smiling while his linebackers get beat in pass coverage.

Some other TE passing routes are a bit tougher to defend. Take this gem by the Packers from later in the quarter: 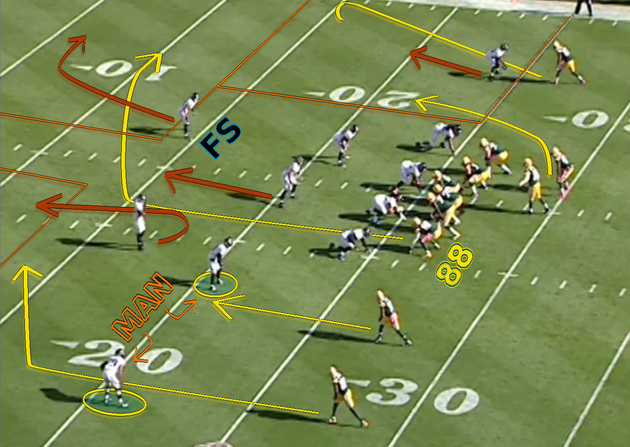 With five receivers running routes for Rodgers, someone was bound to get open in the outlined-in-red Jacksonville zones. Finley's (88) crossing route is Rodgers' preferred option, as the QB knows he'll have two men in the free safety's ("FS") zone a few seconds into the play. If Rodgers has time for his routes to develop, the free safety will be in a pretty tough spot.

It's ironic that Finley's route takes him to the right of the offensive formation, because Tucker has a laid a pretty clever trap for Rodgers on the other side. The two defensive backs at the line of scrimmage are playing man - something that should make Rodgers salivate - but the strong safety is disguising his plan to cover the deep left zone. The SS takes a quick step inside as if he were defending Finley one-on-one, then quickly bails back into his zone. If Rodgers was looking left here, he might have ended up finding a wide-open safety instead of a wide-open receiver.

On the right side, however, it's a "pure" Tampa 2. Finley's route is designed to beat zone coverage, and it does its job admirably. The look we get as Finley catches the ball, however, makes me think the safety play is a bit suspect.

There's something to be said for a safety making sure nothing gets behind him, but five yards is a pretty cowardly generous cushion to play with.

There are two ways to defend against a play like this using a Tampa 2 shell, and the safety being a couple steps closer to the deepest receiver would have been one of them. The other would have been for the Jaguars to have a real pass rush, but Jacksonville's line is suspect at best. Replace their defensive ends with Peppers and Wootton and their free safety with Major Wright, and this play might get stopped.

Mel Tucker will certainly add his own flavor to the Bears' 4-3 defense, but his hire is not a dramatic shift away from the Lovie Smith era. Considering the success Lovie Smith's defenses had over the years, that is not necessarily a bad thing. A former defensive back and a long-time DB coach, Tucker should have no problem coming up with creative ways to confuse QBs with coverage. Mix in Tucker's wrinkles to the more classic 4-3 looks we've seen over the last nine years, and you've got a recipe for continued defensive success.

After having made something from nothing in Jacksonville, Mel Tucker must feel like a kid in a candy store in Chicago. If this game is any indication, he'll be able to treat the NFC North to all the defense they can stomach.