I take a look at the Chicago Bears and New York Giants game tape in detail, and grade the play of the two Bears rookie offensive linemen, Kyle Long and Jordan Mills.

When Chicago Bears head coach Marc Trestman announced that they were going to start two rookies on the right side of their offensive line, it gave many Bears a reason for concern. After all, the Bears hadn't done something like that in over 30 years. The better O-Lines in the NFL are the ones that grow together through years of continuity.

I suppose all lines have to start getting familiar with each other at some point.

The Bears were already gambling on a brand new veteran left side of their line, after signing tackle Jermon Bushrod and guard Matt Slauson, to compliment veteran returning center Roberto Garza.

Why not start fresh on the right side as well?

The Bears have started 1st round draft pick Kyle Long and 5th round pick Jordan Mills at right guard and right tackle respectively, all season long. They've had some growing pains, which is expected of all young players, but they also look like they have the skill set and the temperament to be fixtures on the Bears O-Line for the next 10 years.

After their week one win against the Cincinnati Bengals, I graded the two rookies, and came away impressed. After grading their performance against the Giants, I was equally as impressed. Long is playing like a 1st rounder should, and Mills looks like he belongs too.

I use the same simple +/- grading system I've used all my life. You do your job, you get a plus, you don't, it's a minus.

That first week I gave both Long and Mills an identical +58 (out of 61 total plays). This week, I graded 66 totals plays and Kyle Long received a +58 and Jordan Mills received a +56.

For a little perspective, in week one Pro Football Focus graded Long with a -1.7 and Mills with a +3.4, and in week five Long received a "neutral" -.5 and Mills a -1.6. For more on how PFF grades, click here, and for more on how I grade check out the above link from my week one article.

Grades will vary, because it's all in the interpretation of the grader. I'll bet Bears o-line coach Aaron Kromer will have even harsher grades than I did, and I'll bet that Mills and Long are even harder on themselves than everybody.

Even though I gave a handful of minuses to each player, there were no glaring mistakes from either player. Everything is a teaching moment for the coaches, and they both had good effort all night.

There were a couple pass plays in the first half when the Bears elected to keep Eben Britton in as an extra TE to help out Mills. There was one other instance where Matt Forte chipped on Mills' man, but other than that he was left on an island the whole game.

I'll get into a few specific plays from each player.

-) The first minus I gave Kyle Long was on the 30 yard pass play to fullback Tony Fiammetta. It was a 1st and 10 with 2:18 left in the first quarter. Jay Cutler had time to throw, but Long lost his defender after initially standing him up. Long showed a very solid hand punch, and he stopped the Giant DT dead in his tracks, but then Long didn't move his feet and his guy was able to turn under and get through Long's block.

It may be a ticky-tack minus, but Long never should have let his guy past him. To see that play you can click here.

++) I gave both Long and Mills a plus on the first Brandon touchdown. It was a 3rd and 9, very early in the 2nd quarter. Mills was left one on one with the New York defensive end, and Long set up in his pass protection and took the DT that was passed on from center Roberto Garza. I took the picture below from former NFL player Matt Bowen's twitter. 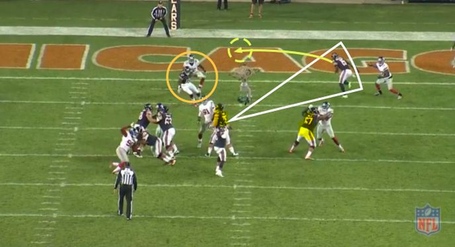 If you want to see the clip of the play you can click here. The "Madden" view, about 30 seconds into the video, really shows the two rookies doing their jobs. The one nitpick I have is for Mills, and it's his hand placement. I'd like him to keep his elbows in tighter which will force his hand punch to be narrower. You don't want to give a defender room to get his hands inside yours, but Mills showed good strength on the play in fending off the pass rush.

+) With 8:15 left in the 2nd quarter Jay Cutler pitched the ball to Matt Forte who ran around right end. Mills pulled, showing good quickness, but I was more impressed with his tenacious sustained block. Check out the GIF below, and watch Mills get his hands on Giant LB Spencer Paysinger, then drive him downfield. Even staying with the block when Paysinger tries to spin off.

+) Early in the 4th quarter, on a 1st and 10, Kyle Long and Roberto Garza executed a textbook zone blocking scheme double team. Each Bears players took half of the 320 pound Johnathan Hankins and drove him off the line of scrimmage. Once Hankins turned his shoulders and tried to move right, Long stuck with him, while Garza went to the second level and picked up linebacker Jon Beason.

I talked about Mills' tenacity in the above GIF, but look at how Long stays with his block and keeps his feet moving until Hankins ends up on the ground. Long is a little high on the play, but he has the strength to finish the block.

++) On 2nd and 9, with 11:49 remaining in the game, Cutler hit tight end Martellus Bennett for a 16 yards gain. The Giants ran a defensive line stunt against the Bears rookies, and they handled it like a couple of seasoned pros. On the snap the Giants attacked the line of scrimmage, but then the DE slanted inside while the DT looped around the outside. Long picked up the slanting DE, while Mills took on the looping DT. Jay had the time to throw and he delivered a strike.

What are your impressions of the two rookies after five games?