Chicago Bears wide out Brandon Marshall has been very vocal in raising awareness for mental illness. He's spending the Bears bye week doing even more for his cause.

Chicago Bears wide receiver Brandon Marshall is used to taking big hits. Last week he took a big hit from Washington safety Brandon Meriweather that nearly injured him. The week prior he took a hit that he gladly accepted, as it helped raise awareness for a cause that is near and dear to his heart.

On Thursday Night Football Marshall wore lime green shoes to raise awareness for mental illness. He knew the NFL would hit his bank account, and he didn't care. The media coverage it would generate was well worth it. People were talking about mental illness. Mission accomplished.

Marshall is in Boston this week at McLean Hospital, where he was an outpatient in 2011, after being diagnosed with borderline personality disorder. Shortly after his visit to the hospital that helped him so much, he spoke at the Kennedy Forum, which was held at the John F. Kennedy Presidential Library and Museum.

The Forum was founded by former Rep. Patrick Kennedy to mark the 50th anniversary of his uncle signing the Community Mental Health Act. 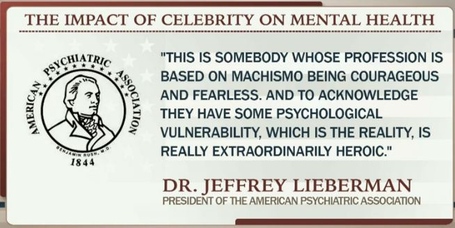 Here's a link to a clip of Marshall talking to MSNBC about the event.

FYI, around the 6 minute mark, Marshall claims that Cutler will be back in 2 weeks.

And here's a link to Marshall's website for more info.