Sports Illustrated For Kids picks the Top Ten of Everything, but were the Chicago Bears represented?

Sports Illustrated for Kids has released another awesome hard cover book, and this time their editors and staff have selected the Top 10 of Everything in Sports. And when they say Everything, they mean everything. How well represented were the Chicago Bears? Continue on to find out.

Share All sharing options for: Sports Illustrated For Kids picks the Top Ten of Everything, but were the Chicago Bears represented?

I don't know how I became the 'book review guy' here on Windy City Gridiron, but it's kind of cool. I receive the occasional book, I check it out, and pass some info along you you guys. The last time Sports Illustrated for Kids contacted me, it was about their Big Book Of Who: Football, and the Chicago Bears were well represented.

This time I received an advanced copy of their Top Ten of Everything in Sports. Before I read through it, I skimmed it looking for the Chicago Bears. The Bears were mentioned a few times, but Chicago sports were all through it. Top 10 lists in general spark a lot of discussion and debate, and these are no different. It may be a Sports Illustrated For Kids publication, but I think it's a great read for sports fans of all ages. 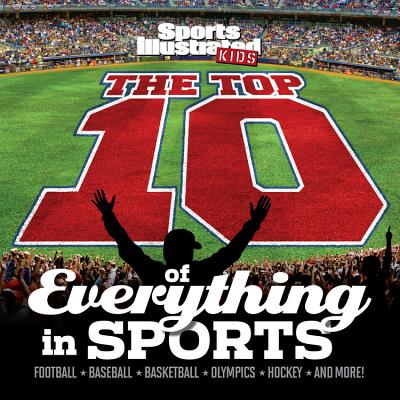 To give you the gist of the book, this is from their press release.

Who scored at the top of the rankings...and do you agree? Select highlights of the top 10 lists include:

· Greatest Athlete: Michael Jordan tops the list, with Muhammad Ali (#2) and Wayne Gretzky (#3) not far behind.

· Clutch Performances: Joe Montana's game-winning drive in the Super Bowl not only sealed the win, but also the #1 spot on the Clutch list.

· Sports Rivalry: Foes for more than 100 years, the Yankees and Red Sox have the most heated rivalry in sports. North Carolina vs. Duke (#2) and Boston Celtics vs. Los Angeles Lakers (#3) round out the top three.

· Records: Joe DiMaggio's 56-game hit streak remains one of the greatest and most difficult to break. Wayne Gretzky's 215 points in a season comes in at a close second.

· Fans: Don't mess with the Oakland Raiders' faithful, who frighten opponents from the south end zone of O.co coliseum, known as the Black Hole. Alabama Crimson Tide (#2) and Pittsburgh Steelers (#3) round out the top 3.

But I know, I know, you're wondering where the Bears are, so here you go.

The Top 10 Little Guys in Sports has a former Chicago Bears quarterback on the list who checks in at #8. This a a player that isn't known for his play in Chicago, but the Bears were his first NFL team. Doug Flutie was acquired by the Bears in 1986 via trade from the Los Angeles Rams.

His time in Chicago was nowhere near as memorable as his Heisman Trophy year at Boston College. The 5'7" Flutie, made another of their Top 10 lists also. His Hail Mary against the Miami Hurricanes that gave B.C. a 47-45 victory checked in as the 7th Most Unbelievable Moment in sports.

Flutie had great success in college, in the USFL, the CFL, and was a Pro Bowl QB with the Buffalo Bills. It's too bad he couldn't get things together while in Chicago, if you remember he was the QB under center for the Bears when they were knocked out of the 1986 playoffs.

At the other end of the size spectrum, the Chicago Bears had the #10 Big Guy ever in sports. The 335 pound William Perry reached iconic status in Chicago with his memorable rookie year of 1985. When he capped his year off with a rushing touchdown in Super Bowl XX, his legend was cemented. These days 335 isn't really considered that big, but in 1985 "The Fridge" was one of only 23 players that weighed more than 300 pounds.

Perry also made another one of SI's lists, as "The Refrigerator" was named the top Sports Nickname of all time. Bears #1!

In their Top 10 Mikes in Sports, the Bears had two such named players, and both had ties to that 85 Super Bowl team. Mike number four is Mike Ditka, who not only was the head coach of that Bears team, but he also played for the Bears, winning an NFL Championship as a player in 1963.

The other Mike on the list, is former Bears middle linebacker Mike Singletary, who is #6. Singletary, along with Ditka, are members of the Pro Football Hall of Fame. Samauri Mike was a 10 time Pro Bowl selection, and he spent his entire NFL playing career in Chicago.

Their Top 10 Old Folks in Sports featured a former Bears player, who wasn't that old in his Bears days. George Blanda was a 1949 draft pick of the Chicago Bears and he played until 1975. He spent 10 of his first 26 years in the NFL in Chicago.

You could argue that the Bears should have made a few other lists, but there were two in particular that I get a little salty about. First off, how does the Chicago Bears vs. the Green Bay Packers not make it as a top ten rivalry? I know that the Pack has dominated the recent history of the series, but the Bears still hold the all time edge 92-88-6. No two NFL teams have played each other more than these two, and they deserved a place on that list.

The other list that sicks in my craw is their Top 10 Coaches. Not because I think that George Halas was snubbed, but because the other nine on their list make it real hard to include Halas. Vince Lombardi comes in as number one, and I can understand the choice, and their other nine are damn good coaches in their own right. I could make a good case for Halas bumping off the other NFL football coach on their list, but he was very good too.

If you're intrigued and you want to see that full list, go get the book!