Breaking down the Matt Forte TD run against the Lions

The bright spots for the Chicago Bears were few and far between on Sunday against the Detroit Lions. One exciting moment early in the 2nd quarter was the 53 yard touchdown run by Matt Forte, but it was a team effort to spring him on the run. Check out the breakdown...

Share All sharing options for: Breaking down the Matt Forte TD run against the Lions

When Matt Forte ran for his 53 yard touchdown early in the 2nd quarter, it gave the Chicago Bears a 10-3 lead, and it made Bears fans think that Chicago would roll all over the Lions. Unfortunately, Forte wasn't the only tailback running wild on the day, as Reggie Bush gashed the Bears defense, and helped his team race off to a 40-32 victory.

But that Forte TD run was a thing of beauty.

If you remember correctly this TD run was on a 1st and 10 that came immediately after the Alshon Jeffery end around that picked up 27 yards. On that end around the Lions right defensive end failed to contain, and instead, crashed down the line of scrimmage. I'm sure the Bears took note of the undisciplined technique from the Lion defensive lineman.

On Forte's TD scamper, the Bears came out in an I Formation, with twin receivers to the right, and a tight end to the left. Forte was the dot of the I, and fellow running back Michael Bush was lined up as the fullback. Having Bush in at FB may have caused the Lion D to be wary of him.

Jay Cutler reverse opened, while both backs stepped left. Bush continued left, and made a pocket like he was going to receive the hand-off. Forte meanwhile, only jab stepped left, before going back to the right. Cutler pitched the ball to Forte with his left hand while keeping his back to the defense, and the illusion created was that he was handing the ball off to Bush with his right hand. This first picture shows the beginning of the play. It was a good misdirection with the counter action in the backfield. 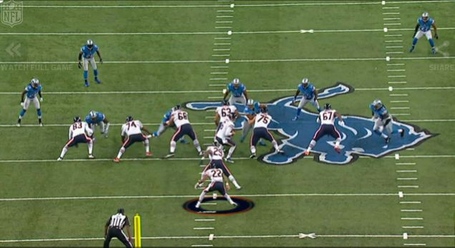 Once Forte took the pitch he received great blocking that allowed him to go untouched to the end zone. This next picture highlights the low block executed by Brandon Marshall. As a coach, I probably would have liked to see his head on the other side of the defender, but Marshall is so big and strong, that once he got into the legs of the defensive back, he exploded through him, and took him down and out. 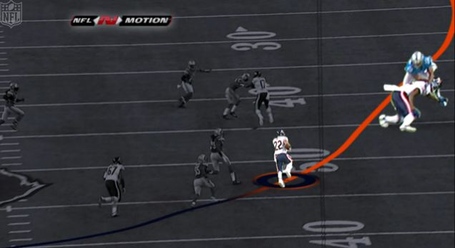 The slot receiver on this play was Alshon Jeffery, and he actually blocks two players. When a wide out is run blocking, it's called a stalk block. On running plays, the receiver has to fire out of his stance, just as he would if a pass play were called, only he's running directly at the DB. Once he realizes that the DB reads a run, he has to breakdown and get his hands on the defender. Jeffery was being pressed prior to the snap, so this happened fairly quick. As you'll see later, the DB covering Marshall was off, so he had more time to prepare to make his block.

Jeffery does a great job getting his hands on the Lion defender, then he just rides him up-field about 10 yards, until they get in the way of the Detroit safety. You can see both Lion defenders in the pic below being taken out by Jeffery. 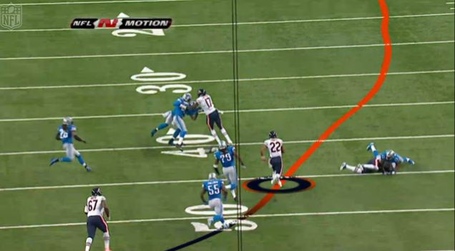 On the last picture I want to point out the job from Chicago right tackle Jordan Mills (highlighted), and the Detroit left defensive end (the player behind Mills). Remember earlier when I mentioned that on the Jeffery end around, the Lions DE crashed down and lost contain? The Bears must have anticipated the same thing on this play because Mills doesn't even bother to block him. Instead Mills goes straight for the Detroit linebacker, leaving Lion DE Willie Young free. 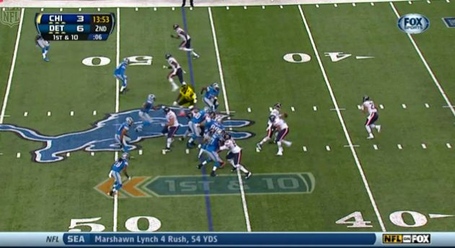 Young was probably peaking in the Bears backfield and the counter action caused him to step down the line of scrimmage. Mills doesn't even get a clean block on Lion LB Stephen Tulloch, but he gets his body between him and his ball carrier, forcing Tulloch to fight inside around the big body of Mills.

This play by Mills, the game planning by the Bears coaches to leave the DE alone, and to put Michael Bush at FB, was all kind of lost in the shuffle because of those two outstanding blocks by Jeffery and Marshall.

Check out the GIF to see the clear path to pay-dirt that Matt Forte had.

You can check out the full video of the play, from start to finish by clicking here.

What were your thoughts on this play?