The Packers lined up in a couple variations of the same formation last Sunday against the Vikings. With the Bears playing a similar defensive front, look for the Packers to bring it back out on Monday Night.

Share All sharing options for: Watch for this Packers formation on Monday Night Football against the Bears

What if I told you that there was a formation that the Packers ran a half dozen times last week, and they never threw a pass out of?

It's true, it's a thing, and until they do throw out of it, it is something the Bears should key run on as soon as they see it on the field. It's a formation that's well-designed to get the ball moving, and it is exactly the way they chose to start out the game. 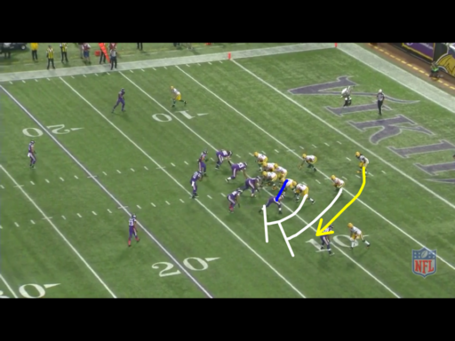 This is the first play after the Vikings returned the opening kickoff for a TD.

You'll see 2 wide receivers outside, 5 men on the line, with TE Quarless lined up offset right, and FB Kuhn offset left. Lacy is the deep back on this play.

Knowing where the ball is going on this one is signified by two keys. Obviously, looking at the running back and seeing where he's going. The other crucial thing is to look at what the guard and tackle do, and their initial movement should tell an instinctive linebacker where to go.

On this play, the guard moves hard left at the snap to take up the defensive end, , and the other linemen generally follow suit, allowing the left tackle to swing up and make a block on the linebacker. Similarly, the FB is able to swing up into the hole to make the second-level block, and Lacy is able to get outside and pick up a 4 yard gain. 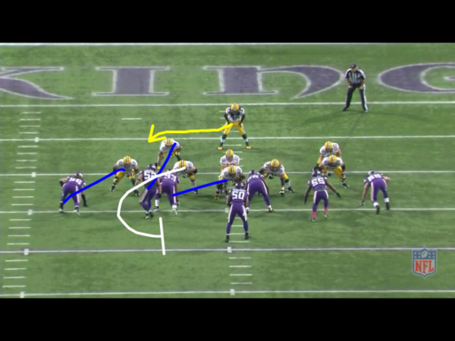 This is the very next play. Sensing that this formation could cause some confusion for the defense, the Packers chose to line up the same way again. Kuhn offset left, Quarless offset right.

This time, the key to knowing where this play is going on is based on what the tackle, guard, and now the center do. The Packers opt to go to the other side. At the snap, the right tackle moves out to lock up the defensive end, while the center moves hard right to occupy the defensive tackle, #93. With the guy on his shoulder locked up by the center, the guard is able to loop up and around to make the containing block on the middle linebacker. At the same time, Quarless steps up into the gap to engage the other linebacker.

While the result is no gain, the Packers have used this formation to put some thoughts in the Vikings head early, which will become fortuitous in the third quarter... 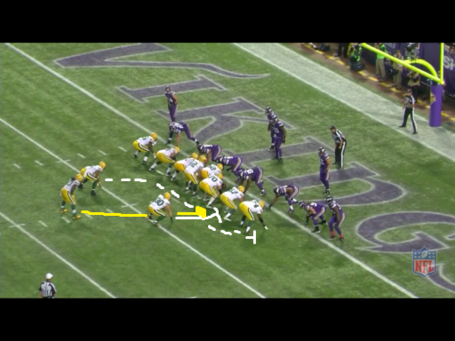 With just under seven minutes left in the third, and a 24-17 lead, the Packers worked their way down to the Vikings goalline, and brought out something very familiar to anyone who watched the first half of the game.

You'll see here a similar backfield formation, this time with Kuhn offset right, and Quarless offset left. The other big key here is that you'll see the Packers have a big-boy set out there, with backup tackle Marshall Newhouse lined up outside starting right tackle Don Barclay.

Pre-snap, Quarless motions out to the right outside of Newhouse. This shift allows one straight up blocker for every single person the Vikings have on that side of the line. With Kuhn stepping up to take on the linebacker, it's an easy six for the Packers.

Again, the key here isn't so much that the Packers are good at running. (Though they are, having gained about 600 yards in the last four games) It's that this is currently about as telegraphed as you can get. Right now, if you see the Packers in this formation, you assume run until they don't, and that's where it's going to be key for the Bears defense to shed their blockers and get to their gaps. Without Lance Briggs on field, it's going to be a lot harder, and some of Bostic's athleticism is going to need to come into play to get to these spots and make these tackles.