Keeping an eye on Sproles in the passing game

Last week, the Chicago Bears had a hard time with Reggie Bush, giving up 173 combined yards. This weekend, they come against another shifty threat in Darren Sproles. Defensive integrity will be key, or the results could be hard to Bear on Sunday.

Share All sharing options for: Keeping an eye on Sproles in the passing game

The New Orleans Saints have a 100% completely legit offense. Anyone who tries to argue that point will generally be considered insane. They've got a highly varied passing attack led by one of the best quarterbacks in the game.

Picking up running back Darren Sproles in 2011 really helped spread that out, too. A "little guy", he was able to come out and really change the dynamic out of the backfield. WIth great hands, and great legs, he can stretch a defense until it breaks.

Let's take a look at a couple of key Sproles plays from their week 4 matchup with the Dolphins, and find some things to keep an eye on as we look at some play styles that will definitely show up again at Soldier Field on Sunday. 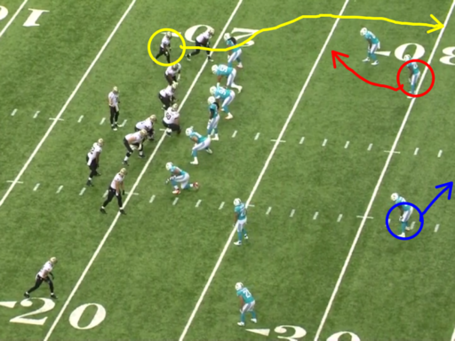 2nd play of the game. The Saints go empty backfield, and Sproles originally lines up on the left almost behind Colston. Colston will eventually slide out just a bit to allow Sproles a little more place to run. The safety in red will draw primary responsibility for Sproles location, and just after the snap the other safety will break to the middle of the field.

Sproles route is disguised as an out. He heads out about 3 yards before breaking to the sideline. The safety overcommits to making the play on jumping this route. 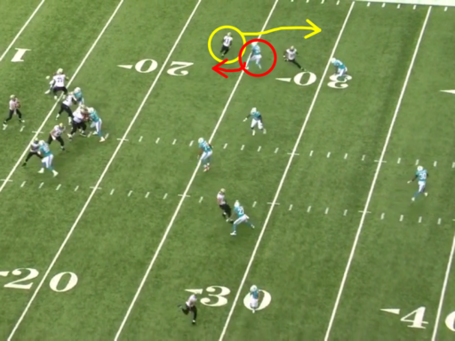 As the safety moves up to jump the route, Sproles cuts upfield to run through an entire open side. This open side is created as Colston brings his route inside, leaving Sproles all alone to catch the ball 16 yards downfield. 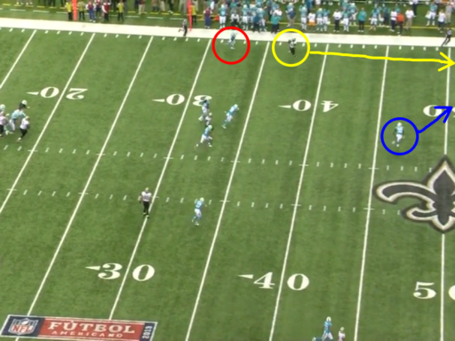 At this point, the other safety sees and knows what's going on, but he's still not close enough to make the play. Utilizing the speed we always hear about, Sproles burns down the sideline, until he gets tackled at the Miami 31. Yes, a sixty yard pass to a wide open running back on the 2nd play of the game.

This is exactly the kind of play the Bears can be (and are often) susceptible to. With the defensive backs' natural tendency to want to go for the turnover, and the safeties that play up farther, the Bears could be in for a long game if they don't keep an eye on these looks. 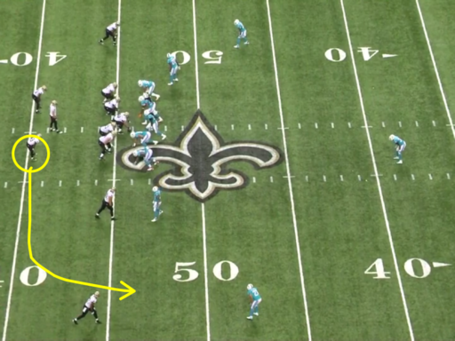 Shotgun, split backs with Sproles to the left. While there's not anything super special about this play, it's particularly effective because of the downfield blocking the Saints provide. (Sound familiar?)

One particular thing to note, and something that can act as a tell for the Bears - as the snap is coming, Sproles actually takes a hop-step to the right as he starts his route, which simply takes him out and behind the receiver split wide right. 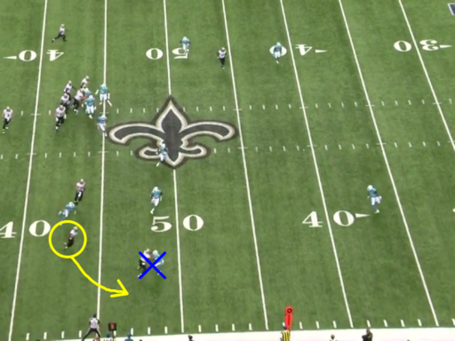 In this shot, you can see what this play does for them. Sproles is already outside all of the defenders save one, and the receiver has him locked up, allowing Sproles to play off his back and get outside, which almost results in a first down. On 2nd down, they lost three yards. But that won't always happen.

Again, it will be crucial for the Bears to maintain their integrity. It's not always the sexiest way to play defense, but if they are slow on their breaks, or overzealous on trying to get in the backfield, Sproles will make them hurt. 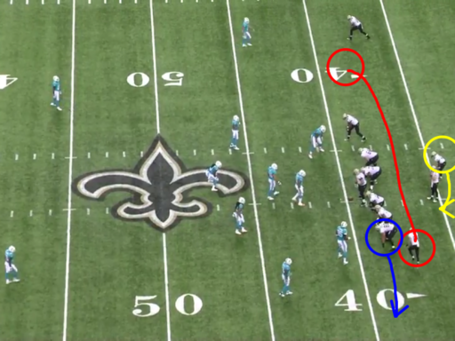 At this point in the game, it was still 7-3 Saints. On 2nd & 10, they had a 12-yard play erased by holding on guard Ben Grubbs. On 2 & 20, they attempted a deep pass to Colston that went incomplete. On third and twenty, they ran quite the play indeed.

As you can see, they lined up in the shotgun with Sproles on Brees' right. WR Kenny Stills then moves to the right, while TE Jimmy Graham shifts outside the numbers on the left. Additionally, Sproles moves to Brees' left. 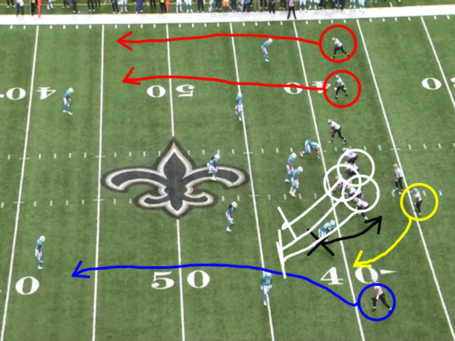 At the snap, this color explosion happens. The two wide receivers on the right (red) and Jimmy Graham on the left(blue), get down field to draw their guys. At the same time, both guards and the center for New Orleans (white) all pull out on the screen pass, while Miami's defensive end (black) sells out on the pass rush to get to the quarterback from his wide alignment.

Saints LT is able to move the end with relative ease, allowing Brees to hit Sproles on a very high percentage completion as he sets up behind his big, moving wall of linemen. 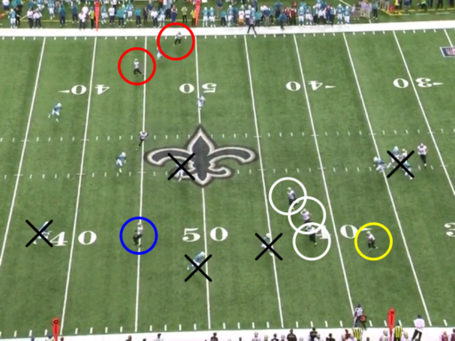 After the catch, Sproles is now in the position above. The ratio of close defenders to close blockers is equal, and Sproles' speed and shiftiness again allows him to make his way down to the first down marker. 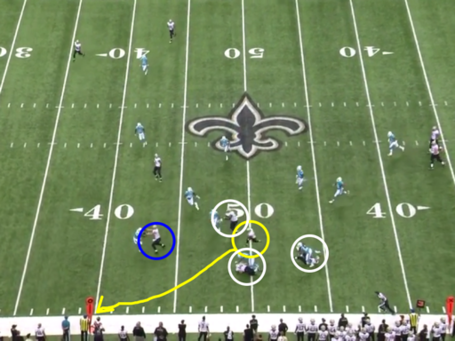 Here, again, shows why the Saints are so effective with these plays. There are four blockers for Sproles as he moves downfield, and the only relatively unblocked guy doesn't have a line because there are blockers engaged directly in his path. For Sproles, it becomes a relatively easy task to make it the last ten yards and convert a big 3rd down. Later in this drive, the Saints would score a touchdown after a couple more big passes by Brees.

Again, if the Bears show up over-zealous on the blitz early, the Saints could use these plays to wear this defense out and catch them off-guard. 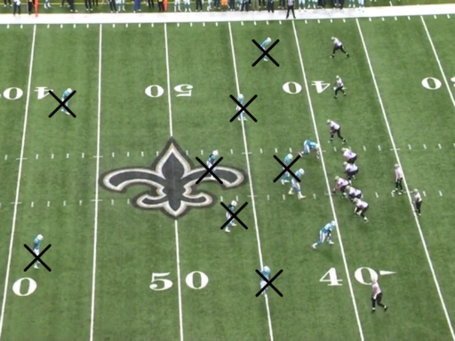 Here's another pre-snap look at this play. Remember, it's 3rd and 20, and look at the the coverage shown by Miami. They're dropping 8, and those 8 are all playing pretty off of their guys. While it's great when you expect down the field plays, it's brutal when the opponent goes underneath. It goes to show the kind of respect teams need to grant to the Saints offense, and don't be surprised if you see a look like this from the Bears on Sunday.

For more coverage of the Saints, check out our friends at Canal Street Chronicles.