Another week for the Sackwatch, and another three sacks to breakdown. The blitzes from the New Orleans Saints caught the Chicago Bears off guard in the first half, but it wasn't all on the offensive line. Continue on to see where I place blame for all three.

To be fair, the Saints didn't blitz as much in the second half.

But to also be fair, when Jay Cutler wasn't being sacked by the blitzes, he was finding the open man. According to Pro Football Focus, Cutler was 7 of 8, for 108 yards, and a TD, for a sparkling 158.3 QB rating on the Saints' 11 total blitzes.

We were told by the Bears offensive players and coaches during training camp that the offense would be a work in progress, and so far through five games we've seen some good, and some bad. In my opinion, they're definitely coming along. Let's see where we stand so far...

So even with the six sacks allowed in the last two weeks, the protection has shown marked improvements than the last three years.

Sack 7 - First Quarter 7:38 Malcolm Jenkins
This first sack is a doozy, so bear with me.

The Bears came out in a shotgun formation on 1st down, with Matt Forte to Jay Cutler's right. They had two receivers in a tight stack on the left, with one WR to the right, and the tight end on the right was actually tackle Eben Britton. Here's how it looked pre-snap. 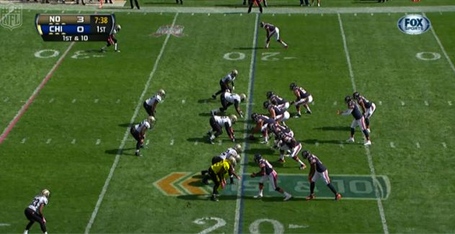 The highlighted player is safety Malcolm Jenkins, who ends up making the sack. Notice the Saints have one down lineman (#93 OLB Junior Galette) across from Chicago left tackle Jermon Bushrod, with two defensive backs (#27 Jenkins and #32 S Kenny Vaccaro) lined up immediately down the line of scrimmage from him. With the two DBs up on the line, and two corners near the boundaries, the Saints have a single high safety.

On the snap the Saints only send five, the three down linemen, and the two DBs to Bushrod's left. New Orleans sent three players at Bushrod and left guard Matt Slauson, and both Bears linemen did their job perfectly. Bushrod allowed Slauson to fan out and pick up Galette, while he fanned out and picked up Vaccaro. So who was responsible for Jenkins?

Pre-snap Jay Cutler should have seen the bunch of Saints to his left, and moved Forte over to that side, just in case they blitzed. With Britton obviously staying in to pass block, there was no need for Forte to remain on the right side.

Count the Saints that are lined up from Bears center Roberto Garza to the TE Britton. I count four.

The four Saints could conceivably be picked up by Garza, right guard Kyle Long, right tackle Jordan Mills, and TE Britton. Now count the Saints that were left for Slauson and Bushrod to pick up. There's three on the line of scrimmage, and a linebacker over Slauson, for a total of four.

As you can see Matt Forte was needed on the left, Cutler failed to recognize that, so that's a fail on his part.

Jay Cutler should have immediately looked to his hot read when he saw the double blitz, and fired the ball to an open receiver. And one of them would have been open, because there was one corner to cover two WRs. So before you ask, that Saint LB isn't fast enough to stick with whichever Bear WR he tried to pick up. Since Jay missed the blitz, he failed.

Two fails for Jay prompts me to pin this sack on Cutler, although I could have slapped this in the "sacks happen" category and been OK with it. Keep in mind that all those 400+ words above that I used to describe the play, is what a quarterback has to have going through his mind pre-snap and immediately post-snap. And that's only the protection issues. I didn't even get into the coverage responsibilities a QB has to know. That's why playing QB is the hardest job in sports.

You watch the play, what do you think went wrong?

Sack 8 - First Quarter 3:59 David Hawthorne
This is another blitz that the Bears simply weren't ready for. They again came out in a stacked receiver look to the left, this time with Forte as the stacked receiver. The Bears had an empty backfield, so any blitz was going to really difficult to pick up, and a delay blitz would be next to impossible.

Matt Forte, remember he's at the top of the stack, should have seen the delay blitz from Hawthorne. It appears that he's looking right at him, but I could be wrong. It does look like Cutler recognized the delay blitz, and it seems like he was looking at Forte, but Forte never turned around. He also has Martellus Bennett in the right flat, but if he thought Forte read what he read, he had no reason to look to the flat.

This one I will stick in the sacks happen category. It was a good play design by the Saints, and they caught the Bears in an empty backfield. Check out the GIF and let me know what you think.

Sack 9 - Second Quarter 14:16 Kenny Vaccaro
I know I pointed out Matt Forte's whiff block in the GIF below, but this sack is on Bushrod. He should have fanned out to pick up the Saint to his left, and allowed Slauson to fan out and pick up the Saint over him.

The Bears are in a similar look like in that first sack above. Shotgun, one back (this time to the left), two WRs to the left (although not stacked this time), a WR and a TE to the right. The Saints are in the exact same front as their first sack, with safeties Vaccaro and Jenkins lined up next to Junior Galette who is in a four point stance. This time with Forte aligned to the left, he can pick up a blitz, only Bushrod blows his assignment.

I think Forte was confused as to why Bushrod didn't pick up Vaccaro. He appears to be setting up to stop Jenkins, then changes course to block the inside threat, only he didn't have time to react. This time the Bears had three to block three, but the assignment mistake by Bushrod doomed Cutler.

What do you guys think about the pass protection after 5 games? Do you see the Bears laying an egg on Thursday night?