After years of Dom Capers proving his reputation as a defensive guru against a rotating cast of Bears offensive coaches, Marc Trestman is now 1-0 against the 3-4 wizard. Here's how Trestman and McCown used Matt Forte as the ultimate weapon against the Pack's 3-4 attack.

Don't look now, but Matt Forte is on pace to come just short of a 2,000 yards from scrimmage season in Year One of the Marc Trestman regime. I could simply gush about how Forte is cementing himself into the pantheon of great Chicago Bears running backs, but his powerful performance against Green Bay was as much a product of scheme as it was Forte's ability to pose a threat in both the run and pass game.

Trestman clearly had a plan for Forte from the start. Let's look at how they used him on the Bears' first two offensive snaps. First, look at what happens in play one: 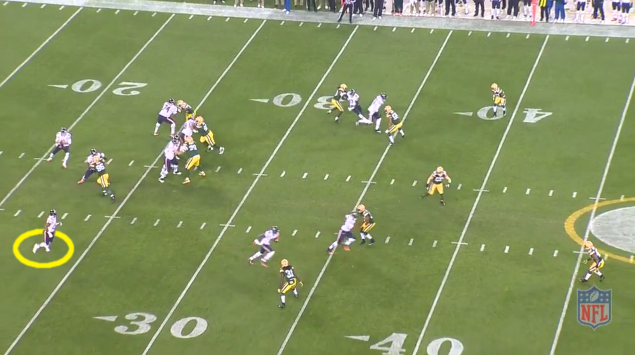 Now, take a peek at the very next snap: 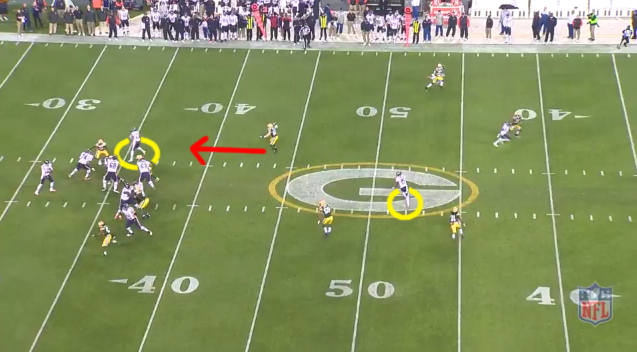 See the difference? Play one, and the Pack send four after the QB but leave Forte completely uncovered out of the backfield. Play two, they send only three after McCown, opting to put linebacker A.J. Hawk in man coverage on the running back. McCown was able to drive the ball downfield on that first snap and didn't need to look for the wide-open Forte, but on that second snap, Forte made all the difference. With A.J. Hawk squeezing up to cover Forte, Brandon Marshall is able to come open on his crossing route for a nice gain.

This "Forte Gambit" - man him up and single a WR or TE, or leave him open and pay the price - showed Trestman's chess player mentality as well as any game he's called this year. Here's one big reception Forte notched later in the game. To continue the chess theme, let's call this particular play "Unicorn Gambit Accepted."

McCown has a clear read to make. With four rushing and two safeties deep, the Pack can only devote five men to short coverage. If the linebackers decide to account for Forte, Martellus Bennett is going to be in single coverage - bad idea. If they do the smart thing and double up Bennett down the seam, however, Forte is going to be uncovered - also a bad idea.

The linebackers stay on Bennett, and Forte is open by a country mile after McCown comes out of his drop. And as Lester said in his look at the Packers' sack of Josh McCown, what a different a real offensive line makes. When the line does its job, it lets the skill players execute strong playcalls like this one.

Trestman had a solid plan to use Forte in the passing game, but he did not neglect the run. Part of the plan was to have McCown audible to an inside zone run whenever the defensive line was in a pure pass-rush alignment, and Forte was able to capitalize multiple times when Dom Capers didn't load up the inside. Just check this 17 yard gallop from the second half:

The Packers' alignment left a big hole in the middle of the defense, and McCown wisely switched the play to a run. With the right play-call in place, Forte's genius in moving up the field is accentuated in this slow-motion shot. While at regular speeds it looks like Forte casually lumbered down the hash, when you slow down the film, you can see the purpose behind every step. Forte moved further into Packers territory every time shoe met turf, and you can see his usual brilliance in using jump cuts to catch his blocks.

Indeed, after getting the ball, Forte didn't take more than about 20 steps until he was downed. Twenty steps, however, were all he needed to take full advantage of the solid blocks against a weak defensive center.

If there's one thing I've learned from meeting Matt Forte in person, it's that this guy - this guy - is more than willing to take the team on his back. And with the game potentially on the line when Trestman decided to go for it on 4th and inches, Forte displayed what can only be called his #TWTW - the will to win.

The Four-Letter Network did a good job of breaking down the exotic play-call after the fact - Pull your center in fourth and short? Crazy! - but the most exceptional part of this play is not the call: it is the personal effort Forte displayed.

FB Tony Fiammetta (43) whiffs on his seal block to Forte's inside, letting linebacker A.J. Hawk into the backfield. But as this slow-motion shot shows, Forte shrugged off the arm tackle, waited for Roberto Garza to take out the edge defender, and kept on churning until he got the yards he needed.

Since his rookie year, Forte has been thought of as a pessimistic "worst of the top-tier RBs" or optimistic "best of the second-tier backs." This season, however, the back who needs no nickname is on pace for a career year and could become only the second player in Bears history to notch 2,000+ yards from scrimmage in a single season. If Forte is able to write his name next to Walter Payton's on that list, it will serve as a testament both to Marc Trestman's understanding of how to get the best out of the back and to Matt Forte's continued drive to exceed expectations.

On Monday, Forte proved yet again that he is someone the Bears can count on to give his all in crunch time. Marc Trestman didn't say the two Packers games were any more important to win than the other fourteen in the regular season, but Forte's monster game helped the Bears keep on the path to play in the two games Trestman did said matter most to him - the NFC Championship and the Super Bowl.