Chicago Bears Sackwatch 2013: Week 14 vs. Dallas Cowboys with a bonus breakdown of the pick screen

This week I'll give the Xs & Os junkie an extra fix, because I'll not only discuss the lone sack the Chicago Bears allowed, but also the pick screen play that Josh McCown kept checking to. The Bears must have picked up on something while scouting the Cowboys that led them to believe the screen would be there, and it was, until it wasn't.

Share All sharing options for: Chicago Bears Sackwatch 2013: Week 14 vs. Dallas Cowboys with a bonus breakdown of the pick screen

The Chicago Bears dismantled the Dallas Cowboys on Monday Night Football to the tune of 45 points and 490 yards of total offense. It was a solid game plan by head coach Marc Trestman and his offensive staff, and the players executed it to a T.

The play calling was on point, and Trestman kept the pressure on throughout the game. Quarterback Josh McCown audibled when the opportunity presented itself, and for the most part, played within the offense.

One play that McCown kept checking the Bears into was something that MNF color man Jon Gruden called the Pick Screen. Basically it's a quick hitting swing pass to the tailback in the flat, accompanied by the wide out "picking" the defender responsible for the running back. It's also called a Swing Screen.

One reason this play was so successful is that the usual West Coast Offense (WCO) sight adjustment when a defense gives this particular look is for the X receiver, in this case Brandon Marshall who is split to the right side of the Bears formation, is to run a slant. Check out this snapshot of the play before the ball is snapped, and I'll explain further below. 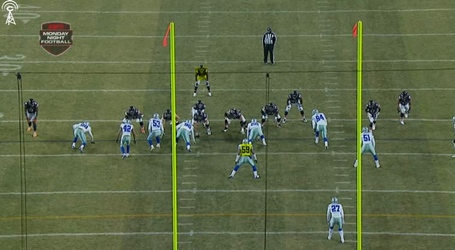 The Cowboys are showing a blitz with not only the strong safety (42), but also with the outside linebacker (53). A common WCO sight adjustment often has an immediate slant call on for the X when the strong safety walks up to blitz. Had Marshall ran a slant, the Dallas corner (who is off the screen) would carry him to the middle linebacker's help. The mike backer would help shorten the window that the QB has to hit his WR.

With the strong safety walked up next to the OLB, Dallas expects the Bears to leave their running back in to help with the blitz. When the Bears release the back into the flat he becomes the responsibility of the middle linebacker (the two highlighted players).

With the Bears showing three receivers to the left, and with those two Cowboys walked up to blitz, Josh McCown is fairly confident he has Dallas playing man to man. A man to man defense leaves the middle linebacker one on one with the running back, and with this formation, as we discussed earlier, the mike is also cognizant of the slant.

On the snap, Dallas does indeed blitz those two players, and Chicago right tackle Jordan Mills allows the defensive end a free rush. Look at how far Chicago running back Michael Bush (highlighted) is already out in front of the Dallas MLB in the picture below. 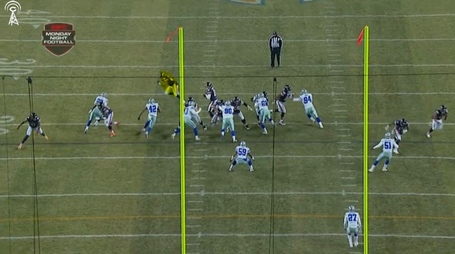 Chicago right guard Kyle Long picks up the blitzing linebacker, leaving two free rushers to get after McCown, the DE and the SS. Wide out Brandon Marshal immediately looks to pick up the Dallas middle linebacker, while running a "slant", which is essentially a pick play. Mills looks to block the Dallas corner that was responsible for Marshall.

The Dallas MLB must have really thought that Bush was staying in to block with their blitz on, because he is late reacting to him darting to the flat. Chicago's trips formation could have also made him hold to what and see what Bears tight end Matrellus Bennett was going to do. Bennett was the inside man on the trips, and he stayed in to block.

His block is really unnecessary with this screen to the right, so that leads me to believe that Trestman has a variation of this play in the playbook that has Bennett sneaking out to his flat after a defense flows to the pick screen.

But back to this play.

The Dallas DE realizes something is amiss when he's unblocked, but instinct causes him to continue his path. By the time Dallas' DE reacts to the uncovered Bush, all McCown has to do is get the ball over the defender, and into the waiting hands of his back. 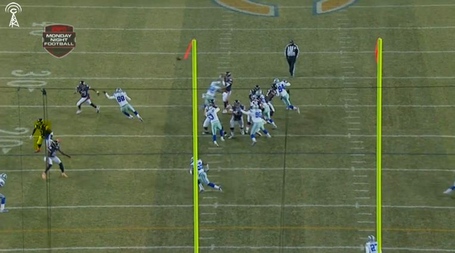 Jordan Mills (highlighted) is now between the ball carrier and the corner, and he rides his block all the way down field. Mills has shown good tenacity all season long when blocking in the open field, once he locks onto a block, he sustains it until the whistle. Marshall, who is right in front of Mills in the pic above, is waiting to block the late flowing MLB. The Dallas free safety drifted over to the trips side on the snap, so he's not in position to help stop the play.

Be sure to check out the video of the Pick Screen to see Michael Bush score the final TD of the evening.

But now it's on to the Sackwatch. 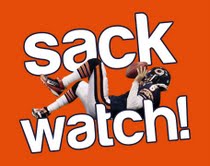 I thought the Bears offensive line had one of their better days on the season, both in pass pro and in the run game. Their combo blocks -- double team the point of attack, then one Bear slips up to the 2nd level -- were very effective.

In their pass protection, they kept Josh McCown clean most of the night. This makes two games in a row they looked good, and hopefully it's a sign of things to come.

Sack 22 - Fourth Quarter 7:49 DeMarcus Ware
DeMarcus Ware was kept in check most of the night, but he picked up a gimme sack on this play. This play should look familiar because it's the same pick screen play we discussed above. Check out the GIF.

Ware goes around Chicago left tackle Jermon Bushrod, but this sack isn't on him. Bushrod allows Ware to go to his outside, because the ball should have been out before his man could get to the QB.

The Cowboys weren't showing a blitz, but they still walked up a defender to account for the Bears being in a trips left. With Dallas being a Tampa 2 defensive team now, Chicago knew that showing a trips formation would get them to check out of their cover 2.

Cowboy defensive end Jarius Wynn sniffs out the play and runs to Michael Bush, leaving McCown with only one option. Throw the ball at the feet of Bush. When a screen has no chance of working, a QB has to get rid of the ball, because he usually has multiple free rushers. Since Josh decided to slide, instead of chucking the ball down, this sack is on him.

I suppose McCown could have had the game clock in mind at this point of the game, and he just wanted to keep it running. An incomplete pass would have stopped the clock, but the Bears had a 21 point lead at the time. Regardless, this sack is on McCown.

Here's where the pass protection blame falls so far.

What are your thoughts on the pick screen and the Bears pass pro his week?