Tonight the Chicago Bears will retire jersey number Eighty Nine, and many of us Chicago fans will rejoice as the heavens open up while the Angels themselves sing Hallelujah followed by Bear Down Chicago Bears, then finally an encore featuring Super Bowl Shuffle. Da Coach's #89 will be worn no longer...

Some of you are sick of Mike Ditka.

You're tired of his "schtict" on ESPN, you're tired of his countless appearances on Chicago sports radio, you're tired of the portion of the Bears fanbase that seems to revel at his greatness, you're sick of his business ventures, and you're probably sick of the recent Discount Daaa-ble Check commercials featuring some of my Superfan cohorts, and none other than the man himself, Iron Mike Ditka.

To each his own.

You're probably also jealous of his glorious head of hair, his incredibly virile nature, his fat wallet, or his outstanding mustache.

Not everyone gets it.

Not everyone gets Mike Ditka, and that's OK.

We don't want everyone to get Ditka, he's our guy. He's about as Chicago as it gets, and he's from Pennsylvania.

He's a Grabowski-kind of guy, that worked hard and created his own luck to put himself in a situation to create one of the most popular brands in all of sports. He was also a part of the last two NFL Championships this city has seen.

The years 1963 and 1985 may not mean much to you, but to us, and many others like us, they equal the world. Those two seasons were everything to many Bears fans, and if we had one sports wish to make, we would of course wish for another NFL Championship for our beloved Bear. Not because of the selfish reasons of seeing our boys hoist that trophy, but because of the feeling a winning team gives to the fans.

Hardcore Chicago Blackhawk fans know that feeling. Chicago White Sox fans still have that feeling fresh in their souls. Supporting a team, and being rewarded with greatness, is second to none for a sports fan.

Bears' fans need that feeling again, it's been far too long.

Mike Ditka helped give that to the city of Chicago on two separate occasions. Could it have been more? Probably, but that doesn't subtract from the magic that was.

That magical feeling is the reason some cherish all that is Ditka, they are reminded of the good times by the Chicago Bears franchise in 1963 and 1985.

That's also why some fans are sick and tired of Ditka, because they are also reminded of the many years of failure by our team. It really brings a tear to us, that a large portion of Bears fans have no idea what it feels like to support a Champion.

And to honor such a great moment, please allow us to reprint our Truths About Da Coach. These Truths were originally written by us, but many are also compiled by you Windy City Gridiron members, and if you have any other Truths that you'd like to add, feel free to do so in the comment section, and the next time we reprint this epic list, you too will be a part of it.

So please enjoy what we feel is the preeminent Ditkaesque work in the entire world, please enjoy these Truths About Da Coach.

1) Mike Ditka's beard doesn't grow out of respect for The Moustache.

2) During his playing days, Ditka had to register his stiff-arm as a lethal weapon.

3) Then during his coaching days he had to register his sharp wit and icy stare.

4) The Legendary Bears Sweater Vest is made with woven Kevlar thread, thus making it bulletproof. It's also fireproof because fire knows better than to mess with Da Coach.

5) You can lead a horse to water, but you can't make him drink. Unless the horse is led by Mike Ditka, in which case the horse will do whatever the hell he's told.

6) Mike Ditka didn't cry at Brian's Song. Not because he wasn't moved, but because he doesn't cry.

7) Mike Ditka once called a 4th time out at the end of a game. The officials of course allowed it.

8) His Moustache has its own P.O. Box, and it receives more fan mail than all the Cubs and White Sox players combined.

9) He was his High School Senior Prom King, as a 6th grader.

10) Mike Ditka doesn't put his pants on one leg at a time.

11) Seventy five percent of the Chuck Norris facts were in fact borrowed from Iron Mike Ditka. He'll take them back when he's ready.

12) Mike Ditka doesn't kick ass and take names, he only kicks ass. The asses he kicks will formulate a list for him on an Excel spreadsheet using the "Impact" typeface, size 14.

13) You know there's no such thing as a free lunch... unless Da Coach asks for one.

14) The "Most Interesting Man In The World" comes to Mike Ditka for advice.

15) One time while a young lad, someone made fun of the Ditka name. One time.

17) Mike Ditka once climbed Mt. Everest because it was a slow Tuesday.

18) If you go in the bathroom, turn off the lights, and say "Da Coach" 5 times while facing the mirror... Ditka will appear and slap the wussy right out of you.

19) His cell phone has never dropped a call.

20) In the 8th grade Mike Ditka won his school's Science Fair with a model of a working volcano. There were 17 other working volcano's made that day, but only one named Mount Ditka.

21) Ditka throws manhole covers around like they were nickels.

22) Ditka doesn't need to seek medical help when the Levitra works for more than 4 hours.

23) Mike Ditka was the inspiration to the Ben Stiller comedy "Zoolander", and his classic pose, Da Pose (as seen here) influenced the classic "Blue Steel" look.

24) Blue Steel takes its name from the beautiful "Blue" eyes of Da Coach, and the "Steel" is an ode to the Iron nickname that precedes Mike Ditka, hence Blue Steel.

25) Batman has 2 phones, one Red for the Commissioner and 1 Blue and Orange for advice from Ditka.

26) Cigars light themselves out of respect.

27) When he sneezes, the correct response is Amen.

28) Ditka has a typeface named after him. Although Clippy was afraid of it so it was dropped from Microsoft Word.

29) Ditka has himself on speed dial, because there are things only Ditka knows.

30) When Mike Ditka is in the sun for any length of time he sweats SPF 30.

32) The first time Da Coach was pulled over for speeding he was let go without a warning.

33) The second time he was pulled over for speeding he issued the officer a ticket.

34) When ever Mike Ditka boards an aircraft the aircraft changes its call sign to Bear Force One.

35) Sticks and stones will break your bones, but names will never hurt you, unless the words are spoken from an angry Mike Ditka.

36) Da Coach once won a staring contest with his eyes closed.

37) Mike Ditka ordered a Double Whopper with cheese at McDonalds and received it.

40) Remember, no matter where you go in life, there you are. Unless Mike Ditka asks you to leave.

41) Gold is worth its weight in Ditka.

43) He can judge a book by its cover, and his judgment is final.

45) Mike Ditka has the key to success, only he changed the locks.

46) Two wrongs don't make a right, unless Mike Ditka says they do.

47) His laptop is always connected to the internet.

48) You know those signs that say, Unauthorized Vehicles Will Be Towed... Mike Ditka's vehicles are always authorized.

49) His mustache is listed on his organ donor card.

50) His mustache alone has experienced more than a lesser man's entire body.

51) The reason the Sphinx has no nose? The Egyptians carved a Ditka-stache underneath it, but it couldn't carry the weight.

52) Mike Ditka personally checked that all mustaches in Super Troopers were not harmed during the making of that movie.

53) The reason Ditka traded his whole draft for Ricky Williams? Because they said he couldn't.

55) The classic "Rosebud" scene from Citizen Kane was much different during shooting - Orson Welles kept muttering "Ditka" take after take, much to the confusion of the entire crew.

56) If you visit one of Ditka's restaurants, the most popular item to order is off-the-menu, called a "Nitschke," and includes braised eel in a cheddar sauce, served with a complimentary head slap.

57) Dave Wannstedt was hired because it was hoped players would think Ditka was still coaching and be inspired.

Remember, any other worthy Truths will be added to subsequent editions of Truths About Da Coach.

And now finally, a word picture Photoshop from own from David Taylor. 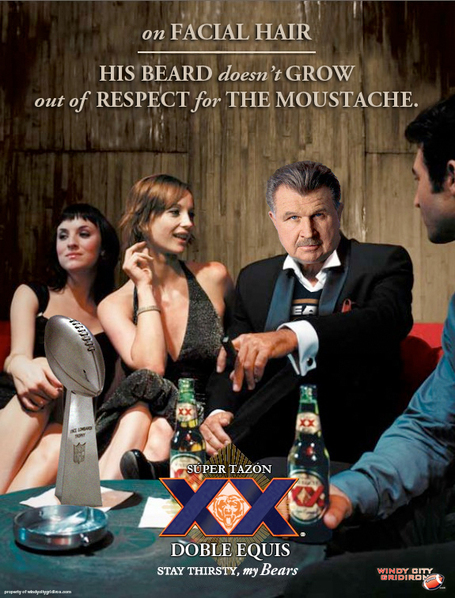