Brett Favre helps clean up after a tornado rips through Mississippi

It's the offseason, and it's been too long, so let's see what Brett Favre is up to.

Share All sharing options for: Brett Favre helps clean up after a tornado rips through Mississippi

There was a point in time, a LONG point in time, that Brett Favre seemed to crave the lime light. Whether that was self-induced, or an addiction of the media, we will let you decide, but since his final retirement from the NFL, we haven't really heard too much.

Tractors, farms, and chainsaws, probably, y'all.

In the last couple days, a series of tornados ripped through Mississippi and Alabama, and Favre had a few things to say about it.

"Nobody was killed!'' Favre exclaimed to USA TODAY Sports during a phone interview. "Look, everybody here is scratching their heads - 'Can you believe it?' Amazin'. ''

"Where the tornado started, as the crow flies, was probably a half-mile to 1 mile straight east of my property,'' Favre said. "Then it just (veered) and crossed the main highway in Hattiesburg before heading to Southern Miss. You never hear of a college getting hit with a true tornado. The good Lord's looking out (because) the students were gone for Mardis Gras break.

"It's kind of one of those things down here. I don't want to say we overlook it, but there are tornado warnings and bad weather all the time. To say that it was black and windy - that could be any day. At times, you just take it for granted.''

We definitely don't want to make light of those affected by the storms, and hope that community efforts are able to help restore power and functionality soon. Favre was caught by a random guy pitching in with his chainsaw. 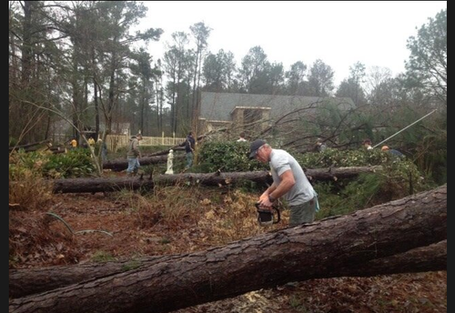 Brett Favre, y'all... Helpin' clean up the mess.