In the upside down world of the West Coast Offense, the pass sets up the run. Here's how Trestman tromps over a defense after he's put them on their heels.

A bad football coach will have obvious tendencies in his playcalling that an opposing team can exploit, but a good football coach will run a team without any "tells." A great coach, however, does both. Indeed, tendencies become a trap in the hands of the masters: an opponent will realize they keep getting beat because of a particular weakness, but as soon as they patch one hole, the master coach has already started exploiting the weakness created by the adjustment.

I'm not ready to crown Marc Trestman as great just yet, but the guy knows how to run an offense. Last week, we saw Marc Trestman calling short pass after short pass to move the ball against defensive mastermind Bill Belichick. Belichick adjusted his defense accordingly, but it was just the adjustment Trestman wanted.

Look at how the defense is playing the Raiders on their second play of the second half, a second and one: 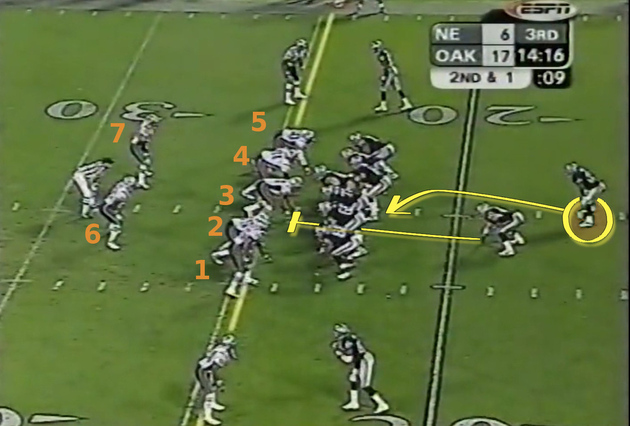 You would think a team would be wise to be ready for the run on a short-yardage down, but the Patriots are unwilling to believe that the Raiders would content themselves with a couple of yards and a cloud of dust. The Pats only have seven men in the box, and sent their safeties deep to prepare for a deep shot or play-action. With a tight end on the end of the line and a fullback in the game, the Raiders have seven blockers to match the seven Patriots defenders - the Patriots have no numbers advantage to counter the run. With the numbers on their side, all the Raiders had to do was execute. 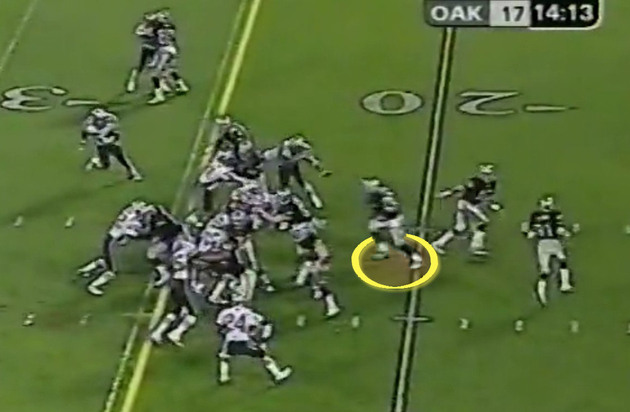 Notice what's happening around the ball carrier, RB Charlie Garner. Every Patriot in the vicinity has a Raider blocking him, and Garner is able to squeak his way through the line for the first first down of the drive.

The Patriots were probably happy to yield this yard, as a short-yardage run is a much better option than a deep pass over the top of a stout run defense. On the very next play, however, the Patriots look ready for another run. They bring a safety (#6) down to the line on a blitz look, and bring an outside linebacker (#1) to the opposite edge. By loading up the line, the Patriots create a major problem for themselves - they left the slot receiver (highlighted) wide open. If this blitz proves to be more than a bluff, all Rich Gannon has to do is loft a quick shot to his left for a big gain.. 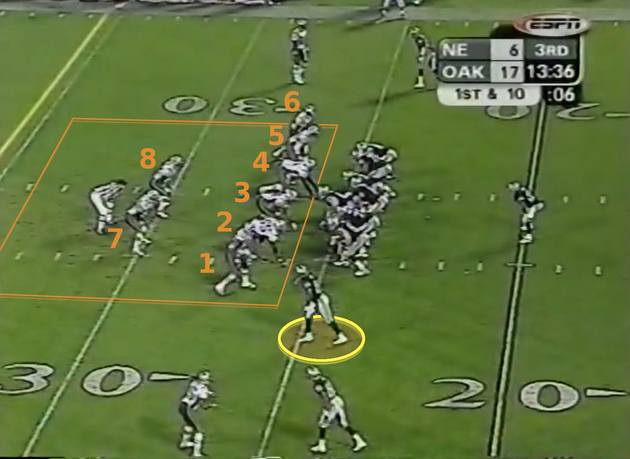 New England wanted Gannon to throw his hot read, though. As we see just before the snap, the blitz was merely a bluff. 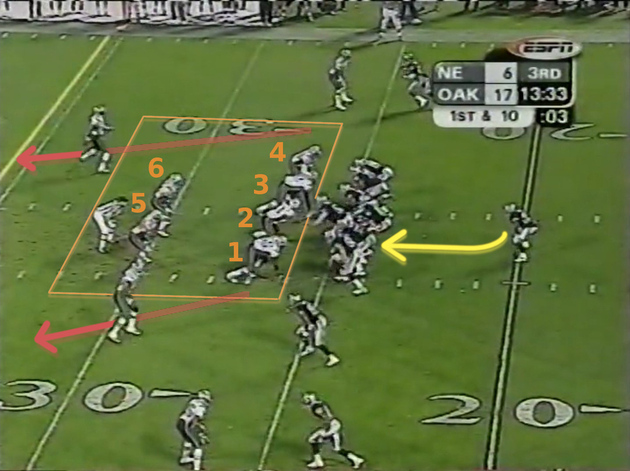 Gannon and Trestman couldn't have been happier about the Patriots' bait and switch, as the play call was a run the whole time. The Patriots had a perfect coverage against the quick pass, but they had to hollow out the center of their defense to get those bodies in coverage. Once again having blockers enough to put bodies on every Patriots defender, the Raiders charged straight ahead for the second straight play, this time gaining much more than one yard: 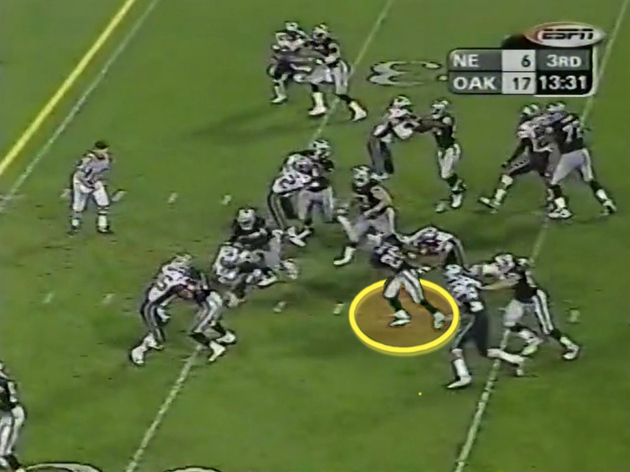 An offensive linesman missed a block on the defender trying to tackle Charlie Garner in this final shot, but Garner shakes out of the first tackle and is able to put the Raiders into a second and short situation. The run game is no afterthought in the Trestman offense. Instead, the run becomes the cudgel that the offense beats its opposition with after a defense is put on its heels by pass after pass.

These first two runs are nothing special as far as play design - every linesman blocks the defender in front of him, and the fullback comes in sometimes to lead the running back through the hole. As many noted in the comments last week, there are some other run plays that Trestman likes to call. If a cornerback is always retreating from the line to defend against the pass, Trestman is going to call the sweep to that side to take advantage. Here's one version of that classic that he called. 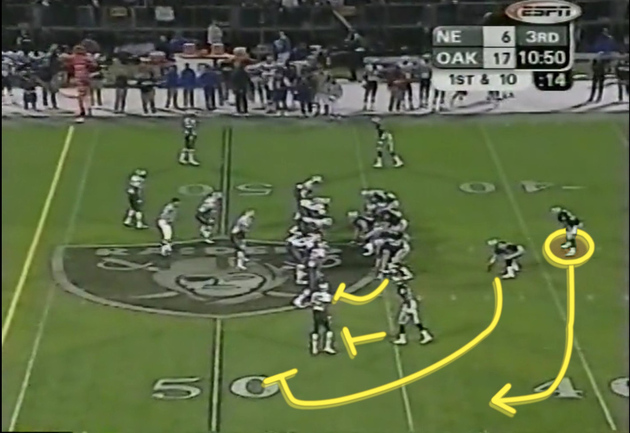 Seal the edge of the line with the left tackle, have the WR block the cornerback, and have the fullback lead the way and block the first man he sees, and the RB can get the edge every time. Again, the Patriots desire to stop a pass play could have been their undoing, except for a great effort by the cornerback. The defender beat his block and dropped Garner for a loss.

The Raiders are running more than the greatest hits of run plays in their offense. On this next one - the very next play - Trestman cleverly lead the linebackers to rally to the right flat by swinging out the fullback on a wheel route. The Pats had to be thinking pass here - second and long means the offense calls a play that gets them long yardage, right? The tendency set up in the first half and the fullback trap laid, Gannon tossed the ball into Charlie Garner's hands to hit the inside gap that was just vacated by the over-eager Patriot linebackers. 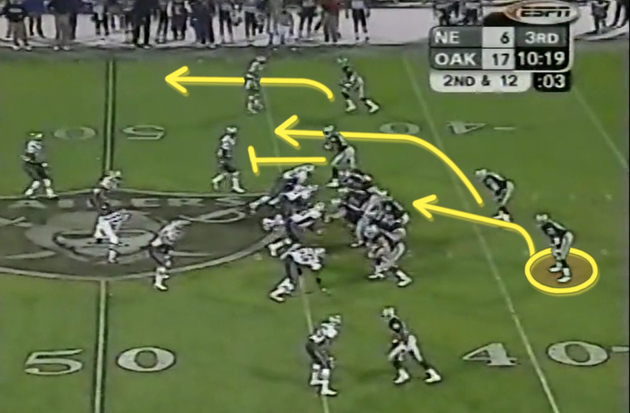 Another classic of the run game is pulling a guard to the opposite side of the line. On this next play, the linebacker reads the pulling left guard and attacks the "normal" hole near the right guard, but the guard continues on past the whole of the offensive line to help set the right edge along with the fullback. The motioning wide receiver takes care of the cornerback on him, and Garner hits the edge for a solid first-down gain. 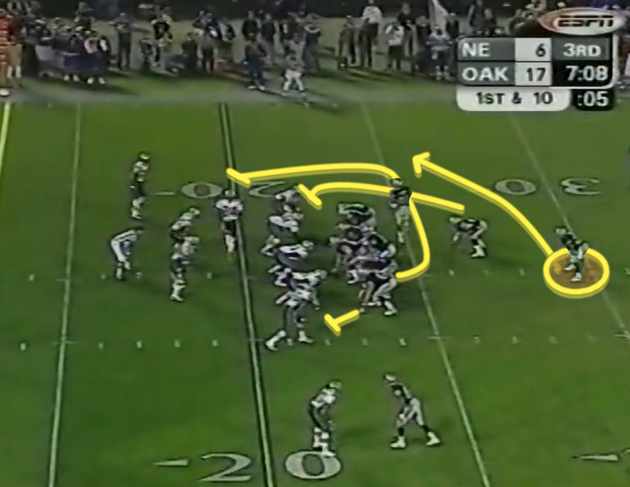 Trestman's offense is certainly pass first, but he's happiest when defenses think his offense is pass only. Between the wide open running lanes that a well-executed passing game can create and the many passes that will be thrown his way, Matt Forte will be more than happy with his role in this offense. As to the most important role that Michael Bush will play - the goal-line offense - you'll have to wait until next week's playbook. See you then.