(helmet tip to Mr.T for showing me this guy)
Another TE hits the spotlight, but this time it isn't a big name, high profile player. Last time we looked at Travis Kelce and how his athleticism and mobility could intrigue teams in the 1st or 2nd rounds, this time let's look at a player from Ohio State, who has some of the same traits, but to a lesser degree.

It's not question that Kellen Davis has been an epic fail, and that Matt Spaeth just isn't athletic enough to play a lot of snaps. Also, we never know if the new regime will want to keep coaching up Kyle Adams, or if they'll get new project players of their own. So here I introduce a late round prospect, Jake Stoneburner. 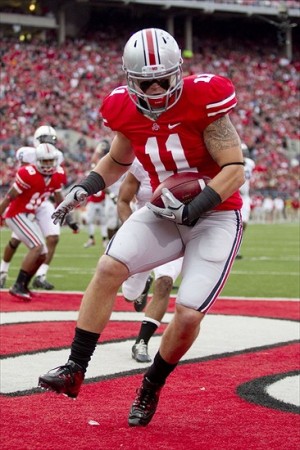 Jake Stoneburner is a three year contributor at OSU, reeling in his fair share of touchdowns. Don't let his low yardage numbers scare you off though, as his yards per catch average in 2012 was almost 17 yards a catch. That's insane.

Stone burner is a natural athlete who can line up in a variety of positions. While at OSU, Urban Meyer had him lining up at wideout, in line, and in the backfield. He's a willing blocker, however not very strong, or aggressive in his run blocking. His catching ability is very good and he has a large window to throw to, however he does not have the straight-line speed to burn passed the defense. He will occasionally beat linebackers, and out jump safeties.

Though he's not the best in-line blocker, he is a good open space blocker which is great for a special teams role.

In all Jake Stoneburner would be a good player to take low in the draft to have a project player who can sit back and learn. I, personally, would not draft him to be the starter right away, but I would feel comfortable having him in a #2 TE, or h-back role.